Over the last month or so Patently Apple has posted a great number of reports on the hot topic of encryption as it relates to law enforcement fighting Apple (one, two, three, four, five, six), with it all beginning last September when Apple first introduced their new unbreakable encryption in iOS 8. In a few of the reports we had noted that there was an underlying reason for Apple's insistence for this kind of encryption. It was their promise to China that the iPhone had no back door and would have no back door. We reported on this specifically back in January in a report titled "Apple is the First U.S. Company Agreeing to have their Products Submitted to Chinese Authorities for Web Security Evaluations." With the press of late reporting that the US government would pressure companies like Apple and Google into creating back doors in their software, it should come as no surprise that news out of China is that they intend to push forward in building their own secure smartphones.

Back in January, Apple ensured China's Ministry that there were no hidden back doors to Apple's iOS 8 for the iPhone 6. The report noted that China's Ministry of Industry and Information Technology said it conducted "rigorous security testing" on the iPhone 6 and held talks with Apple on the issue, and that Apple shared with the ministry materials related to the potential security issues.

Today, the Wall Street Journal (WSJ) reports that "China is seeking to make its own secure smartphones, in an attempt to insulate its handsets from U.S. surveillance.The effort involves both state-owned companies and some of the country's savvier technology firms and marks the latest step in Beijing's quest to build a homegrown tech industry that cuts out U.S. suppliers. Chinese officials have long chafed at U.S. companies' dominance in smartphone operating systems and processors—the parts of a handset most vulnerable to hacking. In China, the world's largest smartphone market, almost all handsets are either Apple Inc. iPhones or are powered by Google's Android operating system." 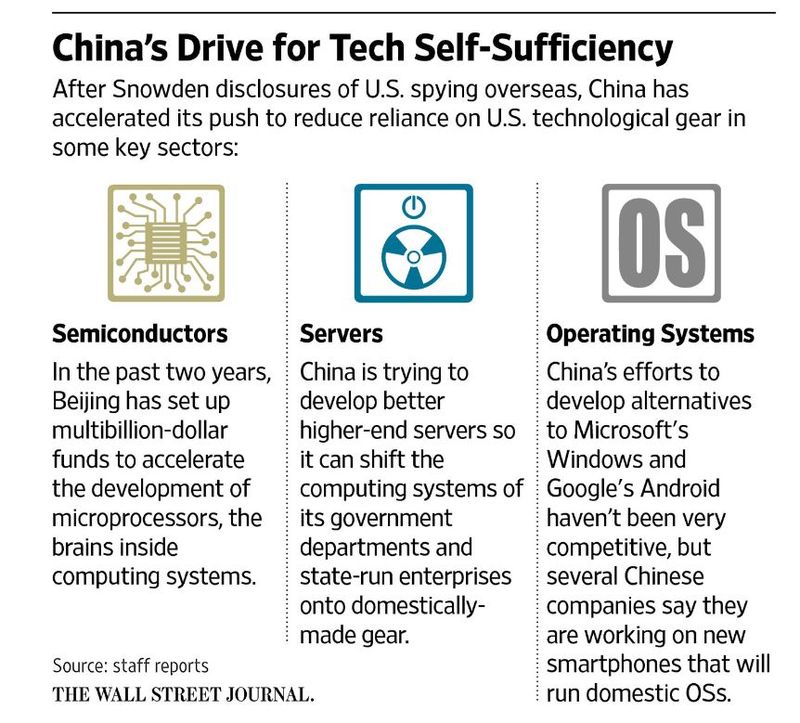 China is encouraging that effort, spurred by revelations in 2013 from former U.S. National Security Agency contractor Edward Snowden that the NSA had placed surveillance 'back doors' in some American gear sold overseas.

Some of the companies behind the new China grown secure smartphones include ZTE, Alibaba, Coolpad Group, Spreadtrum and Qihoo 360 Technology but to name a few.

The Wall Street Journal talked with Bryce Boland, Asia chief technology officer for network-security company FireEye Inc. who said that "just because a phone has domestically made guts doesn't mean it is secure. A hacker could still siphon data directly from a telecom operator, he said. New operating systems are also likely to have more vulnerabilities.

The WSJ report concludes with "Lao Yao, secretary-general of the China Smartphone Alliance stating that some Western governments work with BlackBerry Ltd. of Canada to custom-make high-security phones for their officials, but that China and Western companies don't trust each other enough for this to be an option. Yao further noted that "China has no choice but to develop its own operating system to maintain security."

Past reports suggest it could affect Apple on that front. Yet with Apple building out so many new Apple Stores across Mainland China, the consumer market may be all that Apple needs. For now, while the warning gun has definitely been sounded, no one really knows what it will mean for the smartphone players over the next few years. The key may still reside with Apple's stance on no back doors/weakening of their new encryption. This is the battle to keep our eyes on in the short term.