The U.S. Patent and Trademark Office officially published a series of 31 newly granted patents for Apple Inc. today. In this particular report we cover a 3D imaging related patent. Apple has been, via Primesense, creating a vast library of 3D related patents over the last year (One, two, three, four, five and more). One aspect of the invention relates to 3D imaging for a gaming console. Primesense technology was used in Microsoft's Xbox Kinect accessory device.

Apple's newly granted patent generally relates to methods, devices and software for extracting information from depth maps. Depth maps provide a wealth of information, particularly when they are presented in a continuous stream over time. Depth maps are used in video games and other applications. In the pictured example below, for instance, users 28 and 30 interact with game software running on computer by moving their limbs and changing their body postures. 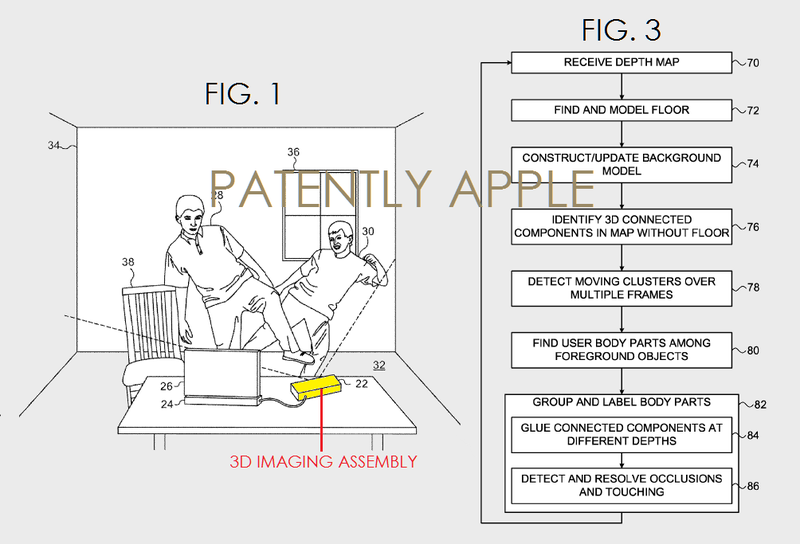 Apple notes that at least some processing functions may be carried out by a suitable processor that is integrated with display screen (in a television set, for example) or with any other suitable sort of computerized device, such as a game console or media player. The sensing functions of the assembly may likewise be integrated into the computer or other computerized apparatus that is to be controlled by the sensor output.

Apple's granted patent number 9,196,045 that was published today by the US Patent and Trademark Office, was filed in Q3 2014 with related work on the invention dating back to 2010.