Apple filed a 'Petition for Order Compelling Arbitration and for Injunctive Relief Pending Arbitration' against BYD Precision Manufacturing Co. Ltd and BYD Company Limited on October 29th. Ever since that time, additional filings have been flying into court fast and furious with both redacted and unredacted exhibits and various other motions. Just yesterday the case was reassigned to Judge Hon. Richard Seeborg. The case involves certain iPad mini and iPhone 6 Plus (and presumably iPhone 6s Plus) products using antenna technology from BYD. BYD is trying to stop Apple's production of the noted products in Chinese Courts which would cause great harm to Apple and their reputation. Apple is racing against the clock to stop the patent infringement lawsuits and the orders to cease production in particular due to a Master agreement that BYD signed which allows Apple and their suppliers to use their patented technology.

Nature of the Petition

The following is from Apple's filing with Northern District of California Court San Francisco (with emphasis from Patently Apple):

"In or around June 2014, Petitioner Apple (a United States company) and Respondent BYD Precision (a Chinese company) entered into an "Amended & Restated Master Development and Supply Agreement Between Apple and BYD Company Limited," dated June 3, 2014 (the "2014 MDSA"). The 2014 MDSA amends and restates an earlier "Apple Inc. Master Development and Supply Agreement," dated May 19, 2011, entered into by and between Apple and BYD (the "2011 MDSA" and, together with the 2014 MDSA, the "MDSAs").

In or around April 2015, in direct contravention of this express agreement not to assert intellectual property claims against Apple or Apple's partners, BYD filed twin suits in the Shenzhen Intermediate People's Court (the "Chinese Patent Litigation"), alleging that the antennae in the iPhone 6 Plus and certain iPad Mini products infringed two BYD patents.

Apple brings this petition pursuant to the Federal Arbitration Act ("FAA"), 9 U.S.C. § 1 et seq., including the FAA's provisions incorporating the Convention on the Recognition and Enforcement of Arbitral Awards ("New York Convention"), 9 U.S.C. § 201 et seq., for (1) an order compelling BYD and BYD Precision to arbitrate the parties' dispute under the 2014 MDSA in accordance with the 2014 MDSA's arbitration agreement, and (2) provisional relief in aid of the arbitration and, in particular, to preserve the status quo pending a final determination of the parties' dispute by an arbitral tribunal.

This Court has jurisdiction in relation to Apple's petition to compel arbitration pursuant to 9 U.S.C. § 203. In accordance with 9 U.S.C. §§ 4 and 206, this Court may direct that arbitration take place in accordance with an agreement in writing by parties to settle their disputes by international arbitration, where one of the parties fails, neglects, or refuses to arbitrate under that agreement. The 2014 MDSA contains an express written agreement to arbitrate disputes arising thereunder. The dispute between Apple and the Respondents concerning BYD's non-assert obligations and BYD Precision's obligations to guarantee BYD's performance of its non-assert obligations fall under the arbitration agreement in the 2014 MDSA.

Accordingly, if BYD is not prevented immediately, and pending a final determination in the arbitration, from continuing the Chinese Patent Litigation, Apple and Apple's supply chain may suffer serious disruption. Such disruption will irreparably harm Apple, Apple's reputation and goodwill, and the millions of consumers and businesses who demand Apple's high-end innovative products."

Apple vs. BYD Docket Overview (Click on Image Below to Enlarge) 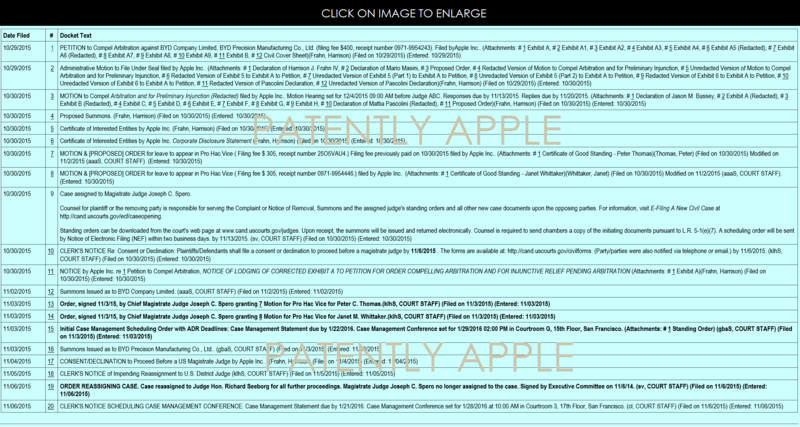 Later in the filing it's revealed that BYD holds two patents in China in respect to Super-Energy Beam Induced Deposition ("SBID") technology which is at the heart of the BYD lawsuits against Apple in China. Though in the bigger picture, BYD holds more than 12,000 Chinese patents.

The filing also notes that "BYD and its subsidiaries are engaged in three major businesses: (i) automobiles, including traditional fuel-powered vehicles and new-energy vehicles [including electric vehicles]; (ii) handsets, including component production and assembly; and (iii) rechargeable batteries and photovoltaic technology, including lithium-ion, nickel, lithium ferrous phosphate, and solar battery products.

Upon information and belief, BYD and its subsidiaries also maintain a significant presence in the United States, including corporate offices in both Los Angeles and the greater Chicago area, and an electric bus factory in Lancaster, California.

BYD maintains its North America headquarters in Los Angeles, California. BYD, directly and/or through its subsidiaries, designs and manufactures vehicles in its California facilities, and in recent years has publicly announced the expansion of its California presence through the execution of contracts with California-based purchasers and through the hiring of additional employees in California."

Apple officially filed their "PETITION FOR ORDER COMPELLING ARBITRATION AND FOR INJUNCTIVE RELIEF PENDING ARBITRATION" on October 29, 2015 in San Francisco. The Presiding Judge, who was assigned the case yesterday, is noted as being the Honorable Judge Richard Seeborg.