The U.S. Patent and Trademark Office officially published a series of 44 newly granted patents for Apple Inc. today. In this particular report we cover Apple's possible future hybrid notebook that at present they've decided to shelf until needed. A second published granted patent today covers Apple's chicklet styled Magic Keyboard that reveals a future capability of adding force touch if not 3D Touch that was first revealed earlier this year with the new iPhone 6s.

For greater detail, see our original patent report that was posted in Q2 2013. Apple's granted patent 9,176,536 was originally filed in Q3 2011 and published today by the US Patent and Trademark Office.

While Wintel is currently dominating the 2-in-1 hybrid notebook-tablet field with products like the new Surface Book, it was Apple that had a patent-pending invention on this design factor for years. While Apple has currently chosen to go with the iPad Pro design with a soft keyboard cover option, today's granted patent allows Apple the option of launching such a hybrid notebook should this category become a hot trend over time.

While we're on the topic of notebooks, Apple was granted another patent today relating to force touch keys in context with an "Ultra low travel keyboard." Apple's current Magic Keyboard is considered an ultra-low travel keyboard. Apple was able to dramatically reduce the depth of a traditional key by using force sensors. 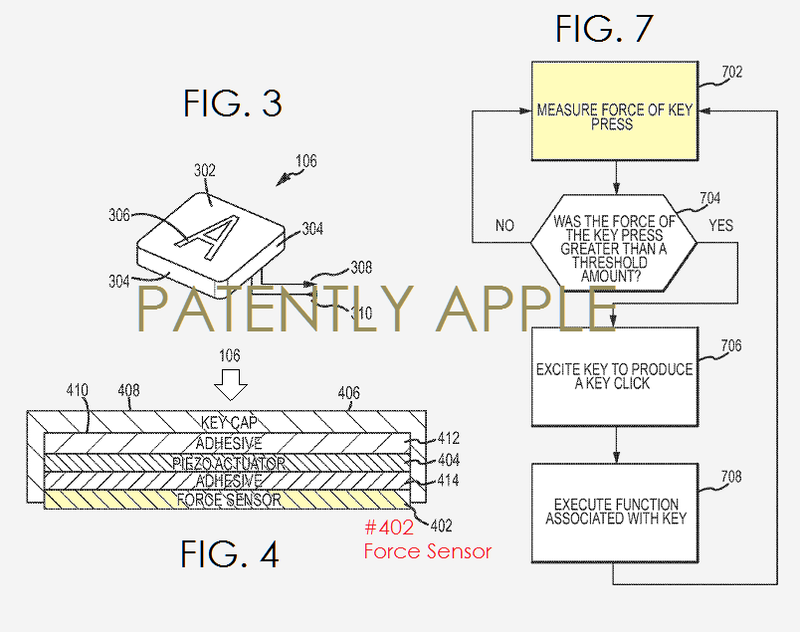 Apple noted back in 2012 that when a key of a conventional keyboard is pressed, the key travels a substantial distance in order to close a switch or otherwise make a contact that registers a key press. Because many force sensors can sense relatively small changes in a distance through changes in force, present embodiments allow for thinner keyboards in comparison to conventional keyboards.

The second part of the use of force sensors in a keyboard has yet to be implemented. Here, force sensors may be able to take on the functionality that's similar to today's iPhone 6s with 3D Touch.

Apple specifically states in their patent that "Additionally, by providing force sensors to measure keyboard input, present embodiments may expand the functionality of the keyboard. More specifically, different functions or commands may be associated with different levels of force input received at the key." Different levels, plural, could suggest a 3D Touch style implementation.

Apple's granted patent 9,178,509 was originally filed in Q3 2012 and published today by the US Patent and Trademark Office.