Last week we reported that the Cybersecurity Information Sharing Act (CISA) Bill was on the Senate floor and that it was an issue that was dominating the week's news cycle. It had begun last Monday with the Wall Street Journal's Live-conference interview with Apple's CEO Tim Cook in a segment titled 'New Frontiers.' While Cook briefly touched on a number of Apple products, he also touched on Apple's view on Security and Encryption. Cook stated that "We think encryption is a must in today's world. No back door is a must. No one should have to decide privacy or security. We should be smart enough to do both." Apple in particular came out swinging against the bill last Tuesday evening, issuing a statement to the Washington Post: "We don't support the current CISA proposal. The trust of our customers means everything to us and we don't believe security should come at the expense of their privacy." Yesterday the Senate passed the controversial cybersecurity bill (CISA) overwhelming by 74 to 21. 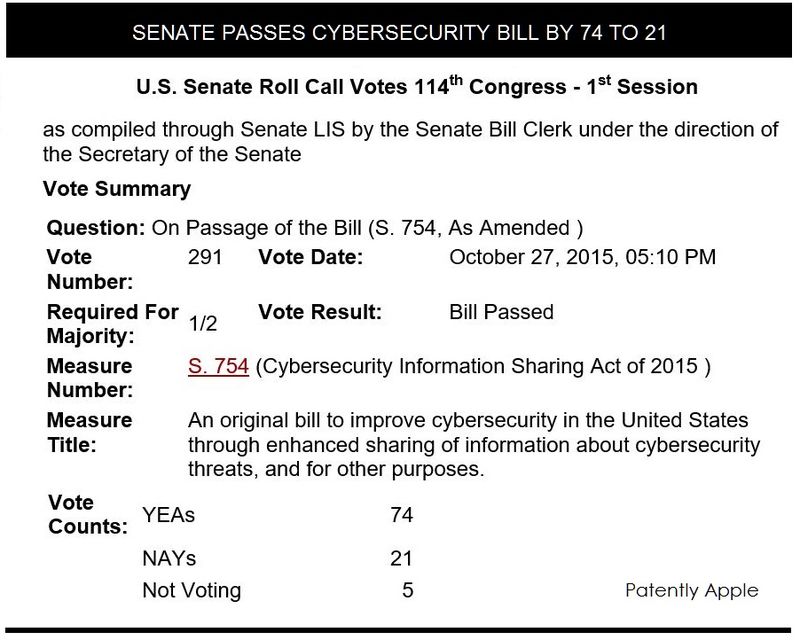 Ryan Stolte, co-founder of cybersecurity analytics firm Bay Dynamics stated that "The criminals are well-coordinated and collaborating regularly to successfully attack organizations, and the security community – which includes businesses, government organizations and anyone who has helpful threat intelligence and knowledge about attacks – should be doing the same."

On the flip side, Edward Snowden has said that the new bill will allow the government to collect sensitive personal data unchecked. You could read more of what each side thinks of the bill here. Whether Apple will be making any further statements on the new bill is unknown at this time.