Yesterday we reported on the top 5 smartphone vendors and today IDC is reporting on the top five tablet vendors for Q3 2015. The report notes that the worldwide tablet market recorded lower shipments for the fourth straight quarter with 48.7 million units shipped in the third quarter of 2015 (3Q15). It's believed that the upgrade cycle is closer to that of PC's which is 4 to 5 years for most. On the other end, mini tablets are challenged by larger Phablets pushing the 5.7" range and so the fall in tablet shipments is likely to continue until this category finds a bottom.

Ryan Reith, Program Director with IDC's Worldwide Quarterly Mobile Device Trackers stated that "We continue to get feedback that tablet users are holding onto devices upwards of four years. We believe the traditional slate tablet has a place in the personal computing world. However, as the smartphone installed base continues to grow and the devices get bigger and more capable, the need for smaller form factor slate tablets becomes less clear. With shipment volumes slowing over four consecutive quarters, the market appears to be in transition." 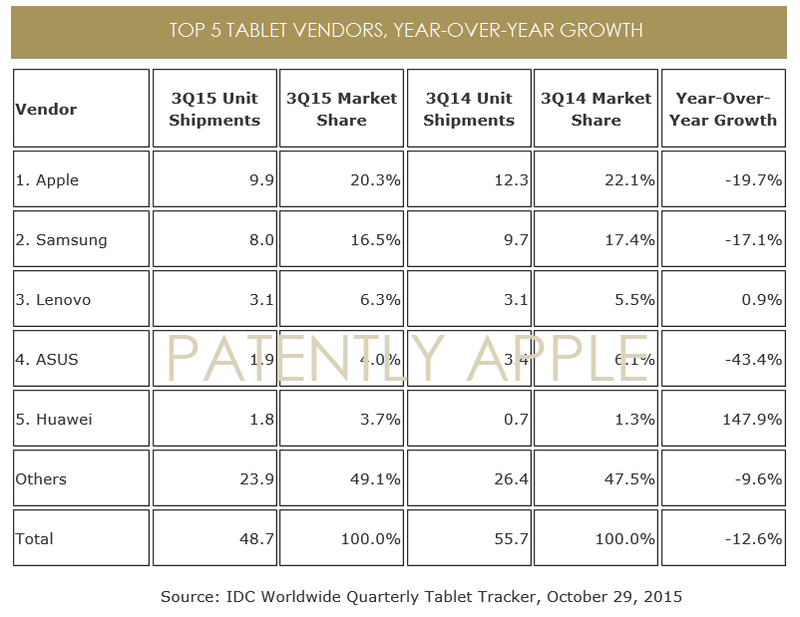 In response to these challenges, the industry is seeing growing interest from vendors in new form factors, with detachable tablets becoming a clear focus for many. While detachable tablets have held just a single digit percentage of the overall tablet market, IDC expects this share to increase dramatically over the next 18 months. However, the shift toward detachables presents some new challenges. In particular, the mix of traditional PC OEMs that are evolving their portfolios to include detachables will face pressure from the traditional smartphone OEMs, many of which have become accustomed to delivering extremely low-cost products.

Tom Mainelli, Program Vice President, Devices & Displays at IDC stated that "The first generation of detachable tablets failed to gain much traction, as they represented a series of compromises in terms of both operating system and hardware that few consumers or businesses were willing to accept. The devices shipping now represent a clear evolution of both OS and hardware, and it's our expectation that both home and pro users will begin to embrace the form factor in larger numbers going forward." With Microsoft's Windows 10 now on tablets, the new Surface Book, new smartphones and traditional PC's, hybrids will begin to be more appealing to traditional PC buyers.

Apple still holds the top position in the worldwide tablet market, although the days of deifying the iPad as the ultimate tablet may have come to an end. Apple's self-cannibalization and increasing competition from PC vendors with detachable tablets have both contributed to a decline in iPad shipments. However, the impending launch of the iPad Pro may serve as a silver lining as the market shifts towards productivity-enabling devices.

In Q4 2012 Apple held 38.2% market share. Today, Apple's lead has slipped to slightly over 20%. But if tablets profits are anything like smartphone profits, then market share is less of a concern.

On paper Apple should be able to show some growth in Q1 2016 for tablets being that Apple reportedly ordered about 2.5 million iPad Pro devices. If it does well over the holidays, we could see Apple's iPad numbers stabilize.

Samsung's everlasting marketing push has once again helped close the gap between itself and top rival Apple. Though the Galaxy-maker is one of the few remaining premium Android tablet vendors, the bulk of their shipments have focused on the low end. The market's shift towards detachables has also piqued Samsung's interest as the vendor continues to launch new devices like the Tab S2 with an optional keyboard to cater to this growing segment.

Huawei has been successful in finding its niche – cellular-enabled tablets. With over two-thirds of its tablets being mobile connected, the vendor has been able to appeal to the growing trend of tablets used for voice calling and tablets used in markets with low broadband penetration.

Huawei is mounting quite the attack on the market. Yesterday's smartphone growth for Huawei was at 61%, the highest of all smartphone vendors and today we see Huawei with growth 148% in tablet growth.