Home Archives Contact Us Subscribe Twitter MeWe Facebook Patently Mobile
Microsoft Guns for Apple by Challenging the MacBook Pro with their All-New Notebook Called 'Surface Book'
With Microsoft launching their First Notebook Today could a Desktop be next?

Realtime Data (doing business as IXO) has filed a patent infringement lawsuit against Apple. The patent infringement lawsuit concerns four patents covering accelerated loading of operating systems and application programs at system boot or application launch. All products using either iOS or OS X allegedly infringe Realtime Data's patents. The company notes in their complaint against Apple, that suing Microsoft with at three out of the four patents in this case had resulted in a licensing agreement.

According to Realtime Data's complaint before the court, Apple has infringed upon patent 7,181,608: "The 7,181,608 (the '608 patent) Patent relates to systems and methods for providing accelerated loading of operating systems and application programs upon system boot or application launch. To overcome the problem of slow boot times of operating systems, the '608 Patent discloses and claims inventive methods and apparatuses directed to, inter alia, maintaining a list of boot data, preloading compressed boot data from the list into a cache memory, and decompressing the data prior to the time when the computer's central processing unit begins to load the boot data.

Apple has infringed and continues to infringe one or more claims of the '608 Patent, in violation of 35 U.S.C. § 271, by manufacturing, using, selling, offering for sale, and/or importing Apple products, including those utilizing Apple's iOS and OS X operating systems, including, but not limited to, the iPhone, the iPad, the iPod Touch, the MacBook, the iMac, the Mac Pro, the Apple Watch, and Apple TV, and any such reasonably similar products (the "'608 Accused Devices"). 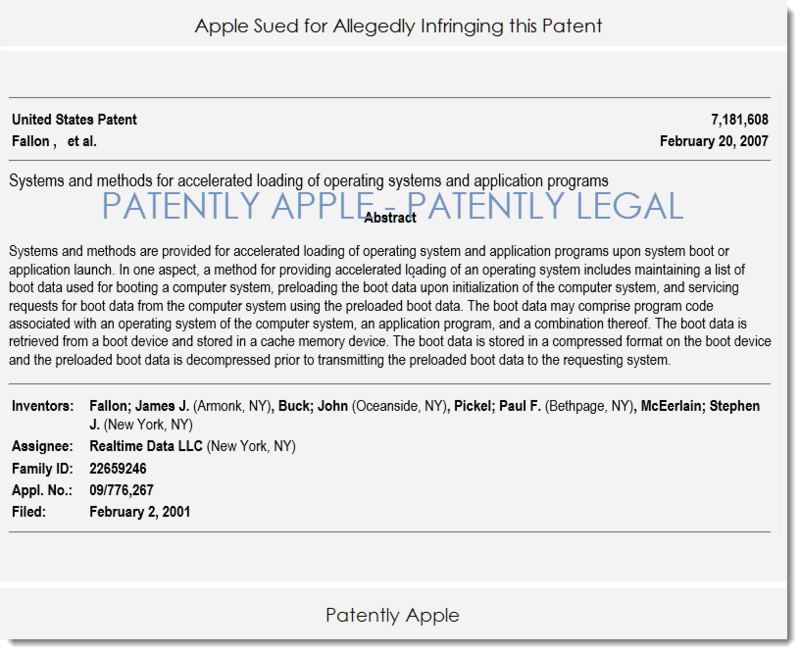 The '608 Patent describes the invention of an apparatus, method and/or system that uses a list of boot data, compressed boot data, preloading of compressed boot data, and servicing of requests for boot data from a computer system using preloaded boot data. Each of the '608 Accused Devices contains software and hardware that performs these functions in the manner claimed in the '608 Patent. On information and belief, this software and hardware is designed to function in unison to achieve rapid loading of an operating system. Further, on information and belief, devices manufactured by Apple are not designed to operate in isolation; they are designed to operate in a manner controlled by Apple's operating system software.

Accordingly, without this software, the devices would either not function or function in an unintended manner. From this, the most compelling inference that arises is that Apple's operating systems have no substantial non-infringing uses, and that any other uses would be unusual, far-fetched, illusory, impractical, occasional, aberrant, or experimental.