Today the U.S. Patent & Trademark Office published a patent application from Apple that reveals an invention that relates to methods and systems for providing consumer notifications regarding newly released media items such as movie trailers. Apple's app will also provide users with information as to where the movie will be playing and even tell you when it will be made available for rent or purchase. Theoretically speaking, Apple's new app could also have an off-shoot relating to their future Apple TV bundle service as well to tell users when new shows will air or when an Apple Music event will take place and so forth.

Apple states that the subject technology of their invention addresses the foregoing limitations of conventional media advertisements by providing a way to notify or remind consumers when a media item, such as a film, is available for viewing in theatre or is available for download. Aspects of the technology also provide methods for delivering notifications or reminders that are location based, for example, on a geographic location of the consumer and/or the consumer's theatre preferences.

In some implementations of the technology can also provide consumer indications that facilitate the consumer's ability to purchase (or rent) access to a media item, via an online store or media player interface, such as Apple's iTunes.

By way of example, a user may be interested in watching an upcoming film once the film is available in theatres. As such, the user can indicate his/her preference, for example, in a watch list or favorites list on his/her mobile device, such as a smart phone.

In some implementations, the user may also provide an indication of his/her preferred theaters for watching new movies or films (e.g. a locations preference). Using the user's movie interest information, as well as the user's locations preference, the mobile device can periodically search for a status of the film of interest. Once the film becomes available, for example in theaters, information about the availability is pulled from a remote database and used to formulate a notification can be provided to the user, e.g., that the film can be viewed at a location/theater that matches the user's preference. 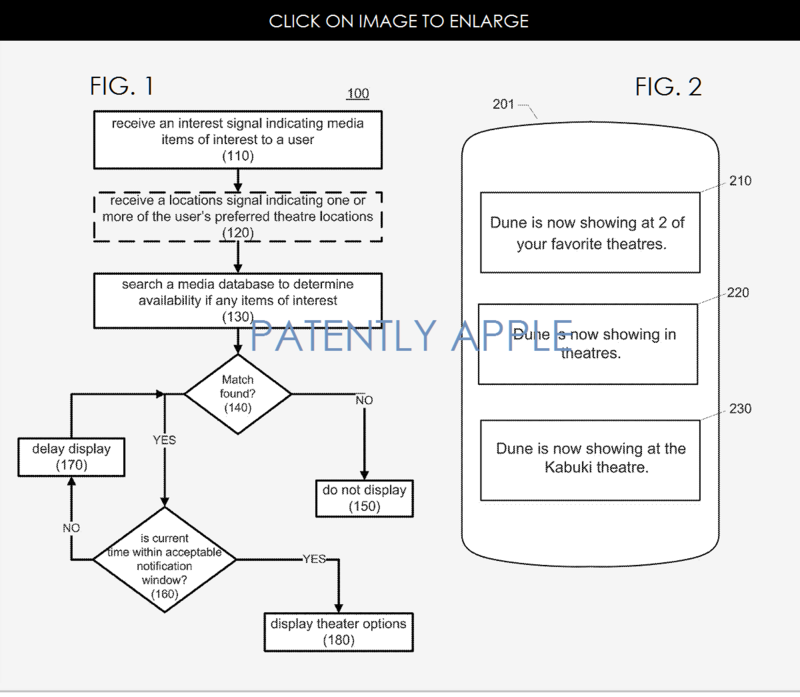 Apple credits Sam Gharabally, Keith Kowalczykowski and Sam Vafaee as the inventors of patent application 20150269655 which was originally filed in Q3 2014. Considering that this is a patent application, the timing of such a product to market is unknown at this time.