It's iPhone 6s Day: the Faithful Line up, iFixit Looks under the Hood, Grey Marketers Go Wild and More

Last year Apple embraced the 'bigger is better' trend with the release of their 6 Plus. This year the 'S' series got an upgraded processor and motion coprocessor, as well as an improved Touch ID sensor and the addition of 3D Touch—among other things. The iFixit crew shuffled off to Australia where the iPhone 6s first went on sale today and they dove right in with this new video to show us what's under the hood.

Over in the UK the Telegraph video shows us that the iPhone faithful lined up at the Covent Garden Store to get their hands on the latest and greatest smartphone on the market today. (Note: once the video begins, click on the expand tool in order to see the video full screen).

BloombergBusiness reports that "In Sydney, hundreds braved heavy rain outside Apple's city-center store. Freelance technology journalist Lindsay Handmer, 32, waited for 18 days in front of the shop to be the first, showering at a local gym and using the toilets at a McDonald's. He plans to auction his two new phones for a charity that helps the homeless.

Over in Berlin, about 400 people waited under clear skies on the main shopping boulevard Kurfuerstendamm. First in line was Helge Bruhn, a 47-year-old Berliner who had camped outside the Apple store for seven days.

'It's the atmosphere, and about meeting new friends,' he said, shortly before the shop opened to cheers from the customers.

About 200 people waited outside Apple's store on London's Regent Street, then cheered and applauded as the doors opened. First customers sported beaming smiles and gave out high-five's, hugs and handshakes while pumping their fist in the air and holding up their purchase proudly.

'I've queued up for past iPhone launches all around the world -- last time it was in New York,' said Moey Shawash, 31, who flew in from South Africa to be the first in line. 'I am so excited about its new color, re-engineered model, 3D Touch and camera.'"

One CNBC UK host noted in a video report this morning: "What on earth are these blokes doing standing in cue when they could just a couple of hours later pick one up without the cue; what's going on?" If you have to ask, then you just don't get it. 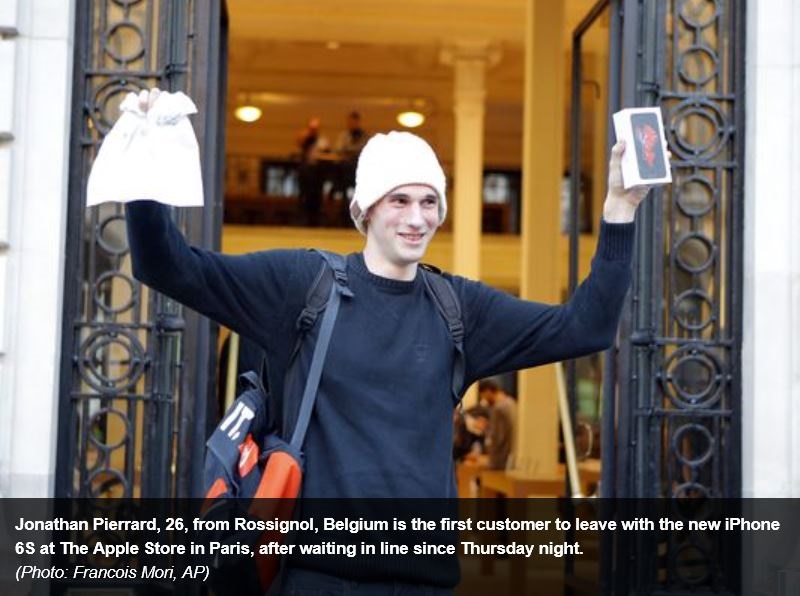 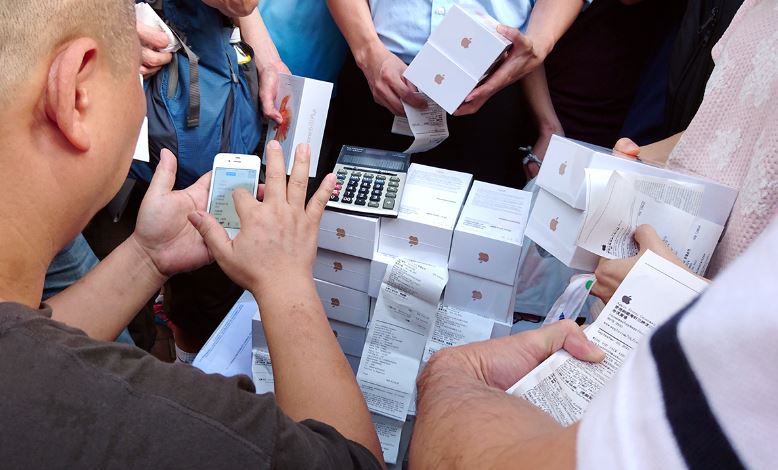 Engadget reports that "Whenever a new iPhone launches in Hong Kong, local folks would seize the opportunity to make a quick profit from the grey market. They would get their brand new phones from either Apple or local carriers, and then sell them off to specialists who would later offer bulk orders to mainland Chinese buyers. The quicker they act, the more cash they get. On launch day, the iPhone grey market trade-in prices may fluctuate by the minute, depending on the demand from mainland China.

Apple's first-weekend sales of the new iPhone 6s should be better than the original iPhone 6 because China is selling the iPhone right out of the gate this time unlike last year. This should handsomely boost the numbers that Cupertino will be announcing on Monday.

Analysts at FBR Capital Markets noted that there will only be two days of iPhone 6s and 6s Plus sales included in the September quarter which closes on Saturday versus nine days in the previous year. But in the December quarter, the research firm said that Apple is on "a trajectory to exceed Herculean-like YOY (year-on-year) iPhone 6 comps in the December quarter with our estimates now 77 million units (versus our prior 74 million), likely alleviating lingering bear chatter".

The only thing that could hurt sales of the new iPhone 6s is one of politics. If we see the U.S. Government hit China with Sanctions for cyber espionage in the coming weeks ahead, then we're bound to see China's Government strike back hard by retaliating against U.S. tech giants like Apple.

Yet today is iPhone Day and we'll worry about what could be another day. So to those standing in cue for a hot new iPhone 6s today: Cheers!