A California company by the name Limestone Memory Systems (LMS) has filed a patent infringement lawsuit against Apple. The Plaintiff is in the business of licensing technology. That translates to being a non-practicing entity or a patent troll. In fact, there's a connection to the Acacia Research Group (ARG) in each of the counts listed in this filing that states that LMS is ARG's wholly owned designated affiliate. IPWatchdog calls ARG the "Mother of all Patent Trolls." The heart of this case focuses on the technology found in Apple's choice of DRAM chips used in Macs and iDevices.

In the first of four counts against Apple, LMS states that Apple's MacBook Pro 13" Retina, MacBook 12" Retina, the iPhone 5c and 4s infringe patent 5,805,504, which was originally owned by NEC Corporation as noted below. 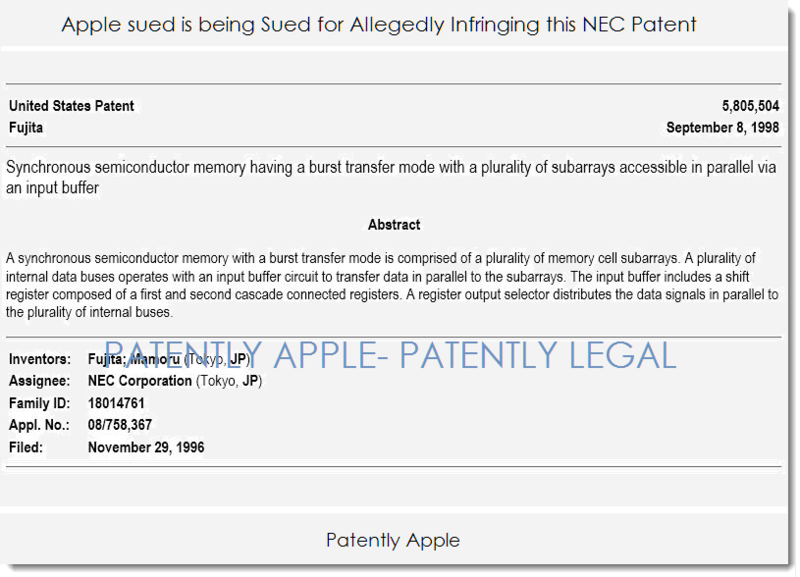 For the record, LMS is presently engaged in a separate patent infringement lawsuit against Micron which began in February.

In the second count against Apple LMS states that Apple is infringing their patent 5,894,441 titled "Semiconductor memory device with redundancy circuit." This time around, the claim is that certain Apple products, use other types of DRAM Chips from Micron including LPSDR, LPSDR2 through to LPSDR4, GDDR5, RLDRAM and other types in the following products:

In Counts three and four against Apple, LMS claims that patents 6,233,181 and 6,697,296 are once again being infringed for the same reasoning found in the first two counts.

As in many patent infringement cases brought against Apple, LMS is noting that the infringement was willful which is legal-speak for seeking triple damages should Apple be found guilty of the charges. LMS also notes that they reserve the right to add charges to this case after discovery.

The patent infringement case presented in today's report was filed in the US District Court of Central California. The Presiding Judge in this case is noted as being Judge Karen E. Scott.

As a side note, we reported back in July that Apple remained the number one target of patent trolls in 2015.