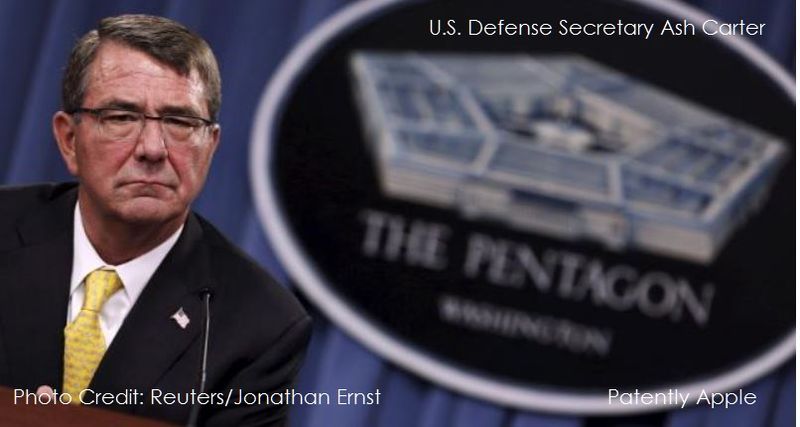 Although it took a while for Apple's new CEO Tim Cook to unveil their first major product after Steve Jobs passing, they've certainly have been making a lot of noise about really changing Apple beyond what any of us could have imagined. The Apple Watch, which could evolve over time to represent a major new profitable category for Apple, was seen as a rather unexpected twist for Apple by many, especially after Cook was so publically against the idea. Then came a stream of rumors about Apple's secret Titan Project and just last week we were given a major clue that Apple could be working with Daimler on an advanced assistance system that could lead to some very sophisticated technology and a new revenue stream for Apple. Today, another off-the-wall statement was made about Apple working with the Pentagon on next-gen devices. Apple is definitely going in directions that no one could have predicted just a year ago.

Today Reuters is reporting that the Pentagon is teaming up with Apple, Boeing and others to develop wearable tech.

The report noted that the "Pentagon is teaming up with Apple, Boeing, Harvard and others to develop high-tech sensory gear flexible enough to be worn by people or molded onto the outside of a jet."

Apple now possesses technology regarding "computer vision" that could create a heads-up display for any kind of military of civilian vehicle windshield and/or headset/helmet for soldiers. And let's not forget that we just posted a story earlier this month titled "The Israeli Military uses Apple iPads extensively on the Battlefield." The report noted that "company commanders were just as likely to be holding an iPad as an M-16, as the mobile wireless device took on an unprecedentedly critical role." I'm sure that Apple gained some experience working with the Israeli military and I'm sure that the this experience could be brought to the table with the Pentagon.

Reuters further noted in their report that defence officials stated that "The rapid development of new technologies is forcing the Pentagon to seek partnerships with the private sector rather than developing its technology itself.

Defense Secretary Ash Carter said in prepared remarks on Friday that he had been "been pushing the Pentagon to think outside our five-sided box and invest in innovation here in Silicon Valley and in tech communities across the country. Now we're taking another step forward." For more on this, see the full Reuters report here.