Apple revealed details of a highly sophisticated wireless charging system back in 2013 that utilizes near field magnetic resonance (NFMR) power supply. It's likely the long term approach that Apple will eventually introduce. Today a new patent application was published by the U.S. Patent & Trademark Office that reveals an Apple invention relating to impedance matching for inductive power transfer systems. With Samsung having wireless charging available for their smartphone line, it would definitely be nice to see such an option for Apple's iDevices in the not-too-distant future in one form or another.

Many portable electronic devices may enter multiple power modes during an inductive power transfer. For example, a portable electronic device with a rechargeable battery may switch, after a period of time, from a trickle charging mode drawing low power to a constant current charging mode drawing relatively high power. Each of the several operational modes may present a different load condition as seen by the inductive power transmitter.

In many cases, changing load conditions decreases efficiency of power transfer between the transmitter and receiver. Accordingly, there may be a present need for a system and method for efficiently and rapidly delivering useful power to a portable electronic device across multiple power modes.

Many embodiments in Apple's patent filing may include a configuration in which the impedance controller is configured to maintain the effective impedance of the portable electronic device from the perspective of the inductive power transmitter at substantially the same value through all or substantially all load conditions of the portable electronic device.

Apple notes that the inductive power receiver can be any suitable electronic device including a tablet computing device, phone, personal digital assistant, computer and a wearable communication device, a wearable health assistant (Apple Watch), a smart telephone, or a media player.

Apple points to a dock housing and a charging surface but never provides a patent figure to show a particular design. The focus of the patent is about the efficiency management for electromagnetic induction power transfer systems, and in particular to systems and methods for augmenting the impedance of an inductive power receiving accessory or inductive power receiving electronic device. 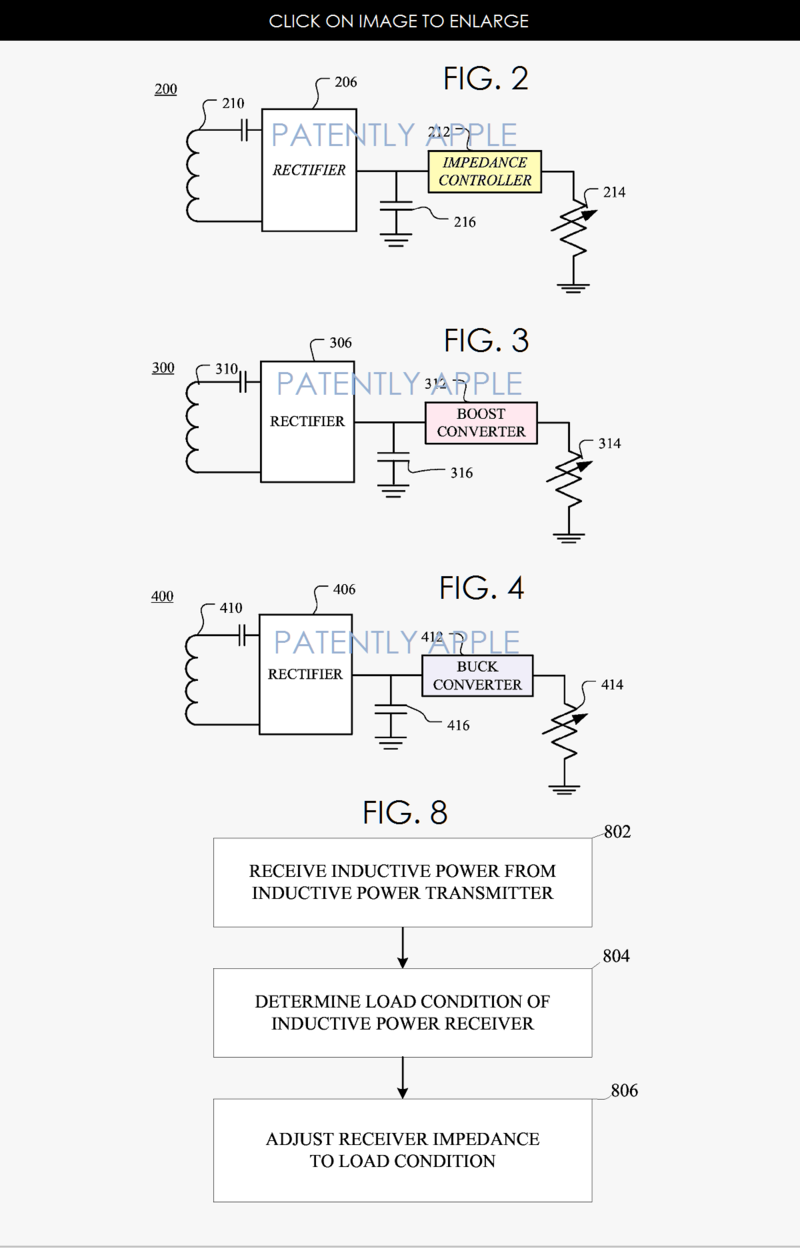 Apple credits David Ritter, Jeffrey Terlizzi, Todd Moyer, Jeffrey Alves and Steven Herbst as the inventors of patent application 20150244341 which was filed in Q1 2015.. Considering that this is a patent application, the timing of such a product to market is unknown at this time.