Yesterday the U.S. Patent & Trademark Office published a patent application from Apple that revealed an invention relating to adding a stain proof method to textured fabric that may possibly be used in future versions of Apple's iPad Smart Cover, Smart Case and beyond. Apple notes that their invention is about "adding a stain proof resin layer to a plastic cosmetic surface without adversely affecting a cosmetic look and feel of the surface."

Polyurethane resin can be utilized to create a cosmetic surface for any number of soft good products. In some applications, a textured feel can be applied to a polyurethane layer to create a pleasing texture having a matte finish. Unfortunately, polyurethane can be susceptible to staining from any number of compounds. Furthermore, application of a stain proofing layer by spraying, rolling or wet bath can cause an outside surface of the textured polyurethane layer generally results in the surface taking on a hard and/or shiny look and feel. This is caused by properties of the stain proofing layer that cause it to fill in texturing patterns of the polyurethane.

Apple's invention generally relates to ways of adding a stain proof resin layer to a plastic cosmetic surface without adversely affecting a cosmetic look and feel of the surface. 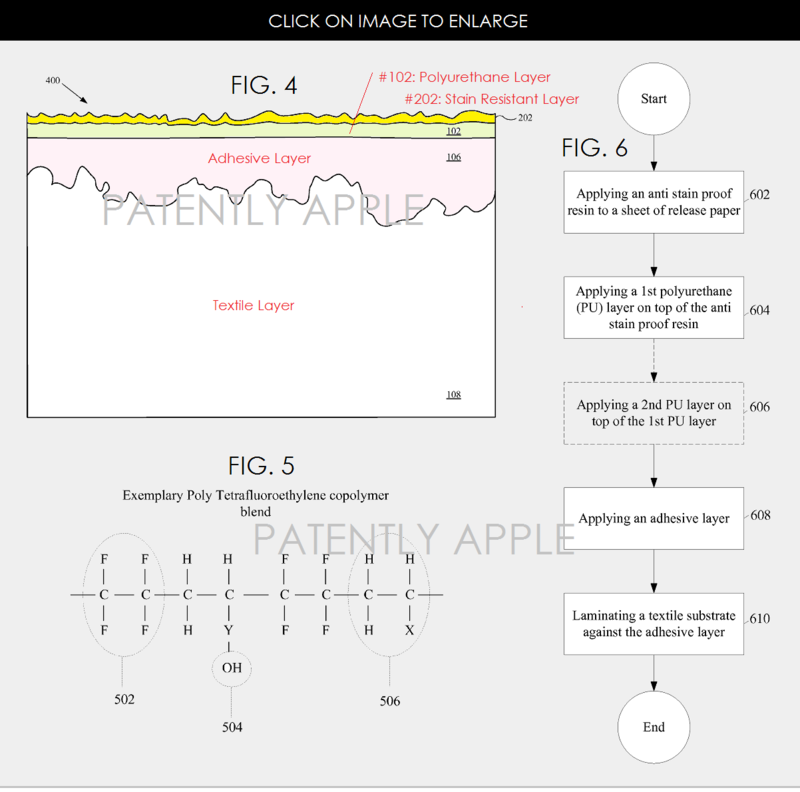 Apple's patent FIG. 5 noted above shows an exemplary molecular structure of a stain resistant resin; and FIG. 6 shows a block diagram depicting a number of steps of a method for forming a polyurethane fabric.

Other methods and greater details could be found in Apple's patent application.

Apple credits Brett Krasniewicz (Development Engineering Manager – Softgoods) and Yoji Hamada (Engineering/ Product Design) as the inventors of patent application 20150210033 which was originally filed in Q1 2014. Considering that this is a patent application, the timing of such a product to market is unknown at this time.