It's being reported today that the U.S. Supreme Court has declined to take up Google's appeal in respect to infringing patents held by Vederi LLC regarding Street View mapping software.

Reuters reports that the high court's decision not to hear the case leaves intact a March 2014 ruling by the U.S. Court of Appeals for the Federal Circuit, which threw out a district judge's finding that Google had not infringed on four different patents. The case will now return to lower courts for further proceedings.

Vederi sued Google in 2010. The company says Google infringed on its patents, which concern ways of creating images of a geographical area that can be navigated by computer. Street View is a product that enables users to navigate images of streets created from a series of photographic images taken by cameras positioned on the top of cars. The specific patents are noted as being 7,239,760; 7,805,025; 7,813,596.

The Vederi "StreetBrowser" system was designed to allow Internet visitors to look at panoramas of streets and visually navigate around a neighborhood. It was hosted on the website of the City of Pasadena for several years in the early 2000s.

At this moment, Apple is currently using a similar technique for creating street view maps and is currently active in several U.S. States along with Ireland and England. The cameras are mounted on the top of vans as shown below.

The court case revolves around Vederi filing for a provisional patent on the StreetBrowser technology back in 2000. However, the formal patent was filed in June 2007 and the patent was issued in August 2009. There's a warning on the USPTO website, in bold font so you don't miss it says that the provisional application becomes abandoned as a matter of law twelve months after the filing date. So Vederi may not get the benefit of having filed a provisional patent application back in 2000. And Google Street View launched in May 2007, one month before Vederi's patent application was filed.

Yet there must be something to this case that we can't see, as the court apparently thinks that this case should proceed or force further rulings by the lower court.

Apple has been quietly amassing mapping patents (one, two, three, four, five, six and many more) and we've covered many. We have patents dating back to 2009. Maps wasn't seen as a hot category when we first began reporting on Apple patents, so there could be older patents on file that we just didn't cover. 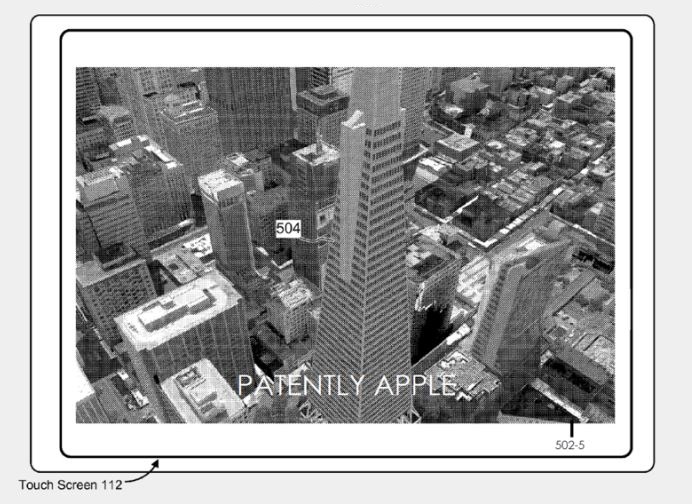 Yet with all of the patents that Apple has on record, they were still sued earlier this year by a Korea company over mapping technology.

So this patent battle ground is bound to heat up over the next few years as Apple's CarPlay and Android Auto battle it out for the best mapping technology. So stay tuned, as this is unlikely to be the last we'll be hearing about patent battles over street view and/or other forms of mapping technologies.

For those that are interested, you could read the 2014 Federal Court of Appeal's ruling by downloading this PDF.