Back in February we reported that Toyota was hesitating whether or not to use CarPlay even though they were one of the original car manufacturers to sign on with Apple. The national manager of Toyota's advanced technology communications, John Hanson was on record stating that "We may all eventually wind up there, but right now we prefer to use our in-house proprietary platforms for those kinds of functions." But in the ever changing landscape of what consumers want in their next vehicles, Toyota is feeling the pressure to modernize and allow the top smartphones to have access to the vehicle's infotainment systems. If consumers can't get CarPlay or Android Auto in the future, they'll simply shop for another vehicle. Today the news is that Toyota is rethinking their original stance on this matter.

Back in December we reported that Ford dumped Microsoft's car platform for CarPlay. Today we're learning that Toyota is exploring the development of an open source version of Ford's AppLink infotainment system. "The move is yet another sign of the auto world's willingness to collaborate if the result is pleasing tech-savvy consumers bent on seamlessly migrating their smartphone-driven lives into the automobiles, reports USA TODAY." The system uses voice commands and Ford's system is now set up for use with Siri.

Ford has said its entire model range would be CarPlay and Android Auto compatible by the end of 2016, while Chevrolet recently announced that more than a dozen 2016 models from Spark to Corvette would offer access to both systems.

Toyota senior managing officer Shigeki Terashi noted that because the in-car app market is evolving quickly, "developing robust, flexible, safe and user-friendly connected services is a priority, one that we believe is shared by Ford, Livio and other contributors to SDL technology." Toyota's shift in philosophy should expedite the move to CarPlay and Android Auto in the not-too-distant future. You could find more on this story here. 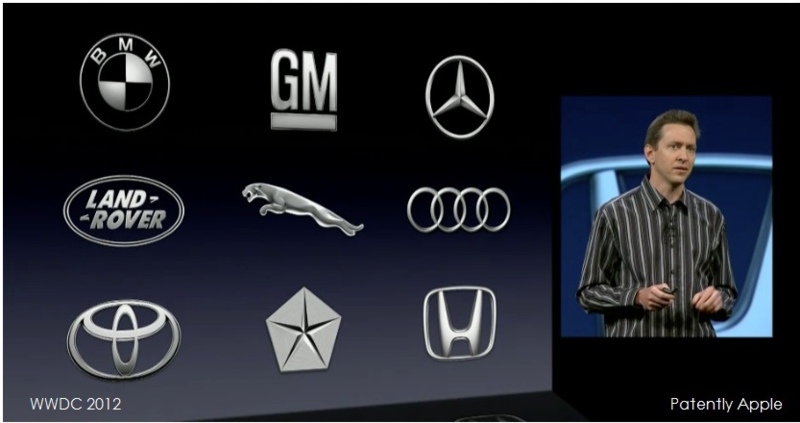 Three years ago at Apple's WWDC 2012, Apple's former senior vice president (SVP) of iOS Software Scott Forstall introduced "iOS for the Car" that later became "CarPlay," showed a slide with Toyota being one of the original car makers signed on for Apple's new infotainment system (Logo bottom left of slide). Why Toyota later changed its mind towards CarPlay is unknown at this time. The good news however is that now they've seen the error of their ways.