Tuesday morning we posted a report about Samsung's Galaxy S6 being unable to unseat the iPhone 6 as expected. In fact sales have been steady and ahead of other Android smartphones on the market, but not performing in the market as the hype led some to believe. Later in the day we did a follow-up report that basically covered Samsung possibly trying to get the leap on Apple again by offering yet larger displays. This time their standard Galaxy S6 with a 5.1 display would leap to 5.7" – larger than Apple's iPhone 6-Plus. Will repeating an older tactic work again? While only time will tell, the alleged move appears to confirm that their new S6 just isn't up to the task of toppling Apple's iPhone. Today, more statistics have surfaced that show us that Samsung's Galaxy S6 Edge in North America are disappointing.

In the ongoing status check of smartphones, Samsung Electronics is seeing lower-than-expected demand of its flagship Galaxy S6 phone in China, while Apple is seeing continued steady sales of its iPhone 6, according to analysts John Vinh and Michael McConnell of Pacific Crest Securities. Today they offered a survey of U.S. handset sales gathered from store inquiries, as well as feedback from companies in the supply chain. As shown below, the analysts offered an Infographic of how the GS6 is selling slower than the prior flagship, last year's Galaxy S5. 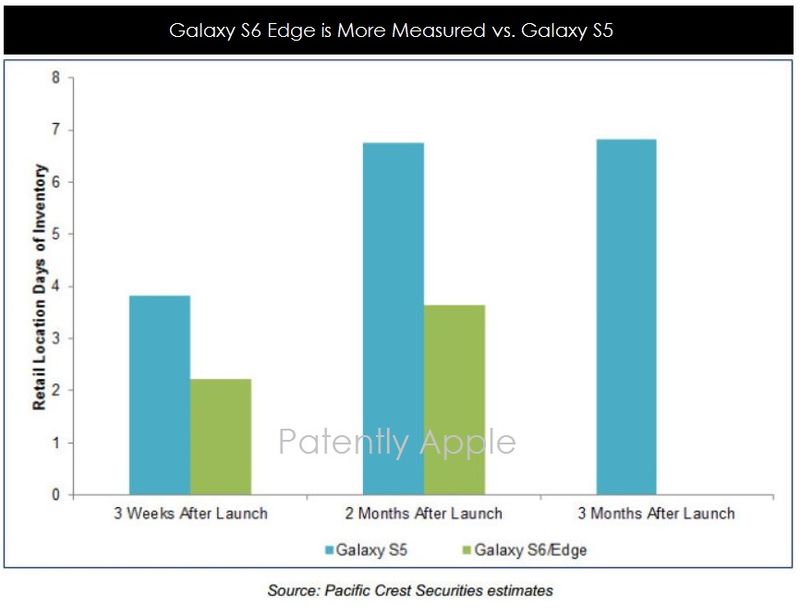 On the Samsung front, the analysts note that the GS6 is up against some tough trends in China:

"Outside of the U.S market, we have learned from our supply-chain partners that GS6 demand in China has been tracking below expectation. We expect Q2 GS6 production to be flat to up single digits y/y, down from our prior expectations of up double digits y/y."

Based on carrier conversations, sell-through results for GS6/Edge in the U.S. market appeared in line with carrier expectations with channel inventories remaining relatively lean. Despite lean inventories, we are concerned to see that AT&T had been offering a free Galaxy Tab 4 with the purchase of GS6/Edge during May. Despite the tablet promotion, we saw no upside to our sell-through estimates and see modest risk to component estimates, as we note relatively lean inventories.

If anything, the statistics are showing us why Samsung may be preparing a second wave attack on the iPhone this fall by offering larger displays for the S6 Edge. It's apparent that going head to head with Apple has failed, so another tactic is required – and fast.

While Samsung is confident that the problem with the S6 Edge is based on production problems with its curved glass that are now reportedly solved, Samsung has to counter the popularity of the iPhone going into the all-important Q4 holiday season with no overhanging excuses. Another loss for Samsung on the smartphone front would be disastrous for their once leading brand.