Patently Apple reported on the first of three Apple patent applications yesterday that were published by the European Patent Office late on Thursday.  Our first report titled "New Apple Watch Patent Covers Wearable Multi-Modal Physiological Sensing System," focused on advancing the Apple Watch's heart rate sensors to work while a user is in motion. Today we're reporting on the second and third patents in this group which cover Apple's Health app and ResearchKit.

Approximately 133 million Americans currently suffer from at least one chronic condition. This number is expected to rise to approximately 165 million by the year 2020. As a result, the cost of healthcare in the United States is expected to increase dramatically. Attempts have been made to improve the health of individuals by providing them with tools to monitor and track their wellness data. Wellness data can generally include any type of data associated with a person's health, such as their weight, heart rate, blood pressure, blood glucose level, medication compliance, activity level, or the like. Users can monitor their wellness using devices, such as blood pressure cuffs, blood glucose monitors, electrocardiograms, step counters, and the like.

Apple introduced their Health App solution during their Worldwide Developers Conference (WWDC) 2014 that was designed specifically for iOS 8 and beyond. The application is intended to be a personal and central data collection point, for connected third-party electronic accessories and wearable technology that can directly monitor and analyze an individual's biochemistry and physiology for medical and general fitness purposes.

As most know, Apple's Health app displays a dashboard of all the fitness and health data of the user, including the heart rate, calories burned, blood pressure, blood sugar, cholesterol, and other similar functions.

Although most iOS users have the Health App sitting in their iPhone apps home screen, when the app is opened you're unable to see specific interfaces until you're actually using the app. To see what they will generally look like, Apple's Health app patent figures shown below will provide you with a grand overview of how they look and function. 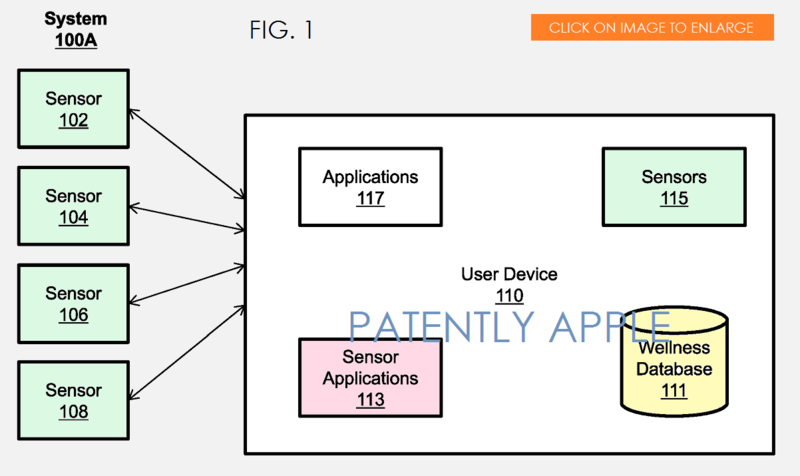 Apple's patent FIG. 1A illustrates a block diagram of an example system for aggregating wellness data.

Apple's patent FIG. 1B illustrates a block diagram of an example system for sharing wellness data according to various examples.

Apple's patent FIG. 2 noted below illustrates an example process for authorizing and pushing wellness data to other authorized users such as family or friends as noted further below in patent FIG. 14. 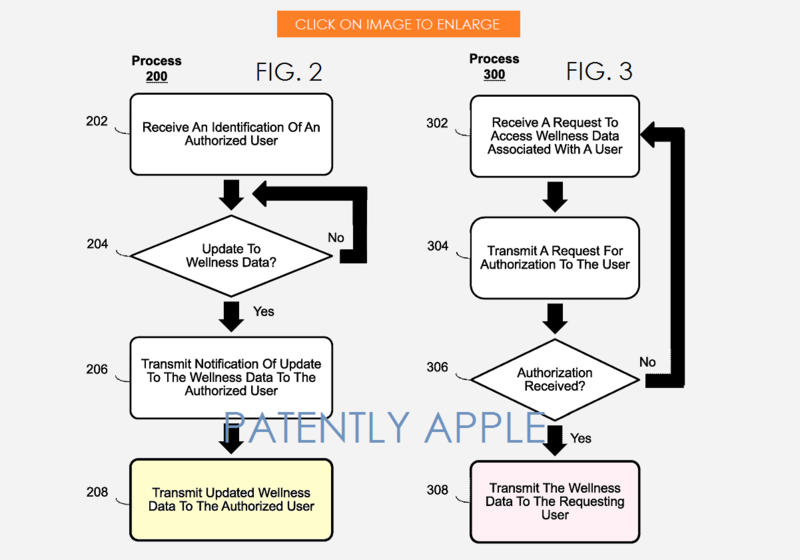 Apple's patent FIG. 3 noted above illustrates an example process #300 for authorizing other users to pull wellness or non-wellness data.

Below you'll find a series of 3 screenshots relating to the actual Health App. In this example the user chooses "All" categories which will lead to Interface 2. Here the user is able to choose from a long list of health related specifics that they wish to monitor over time. For this example, the user has first chosen "Blood Pressure." When pressed, Interface 3 is presented to the user which will be the place where their personal blood pressure stats will be stored.

In Apple's patent FIG. 4 further below, you're able to see that once the user has opened a series of health categories that they wish to monitor, Apple provides them with a folder-like user interface with all of the tabs reflecting the user's personal Health app. When any category is tapped, the full interface of that health item will open and collapse the others until the user is finished reviewing their particular health data. 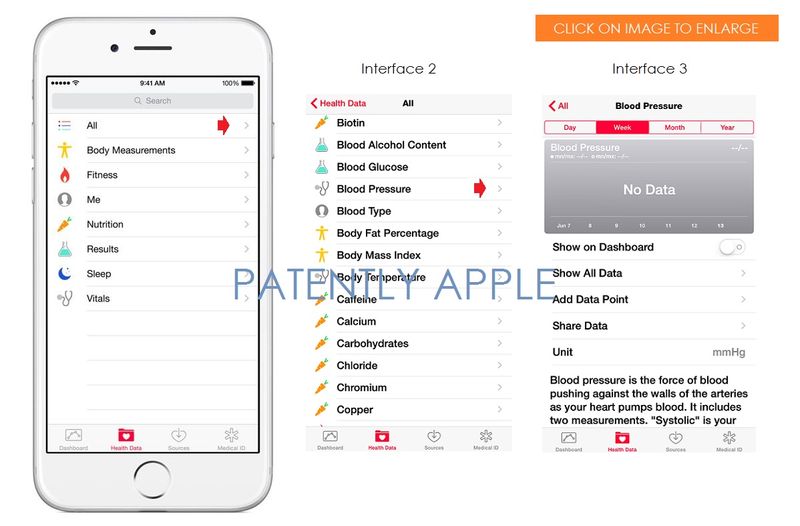 Apple's patent FIGS. 4 through 9 illustrate example interfaces for displaying aggregated wellness data according to various examples. In the first set of interfaces below you're able to see 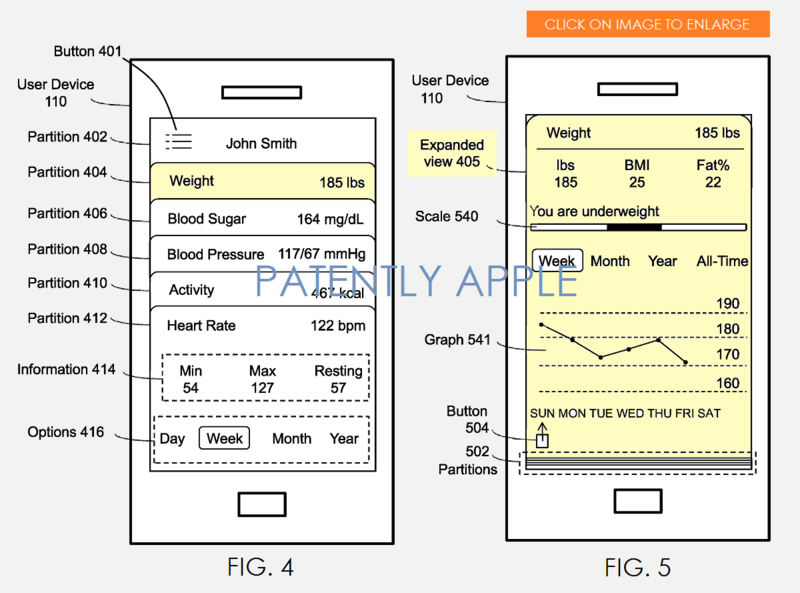 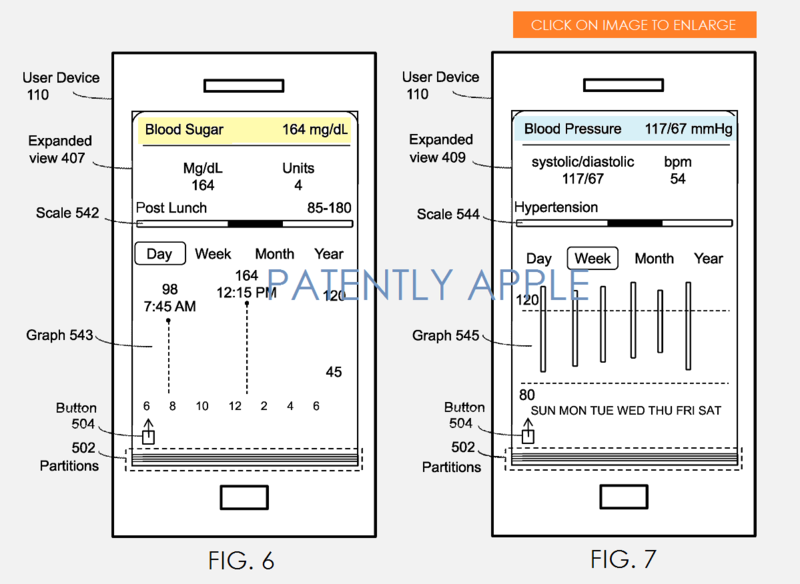 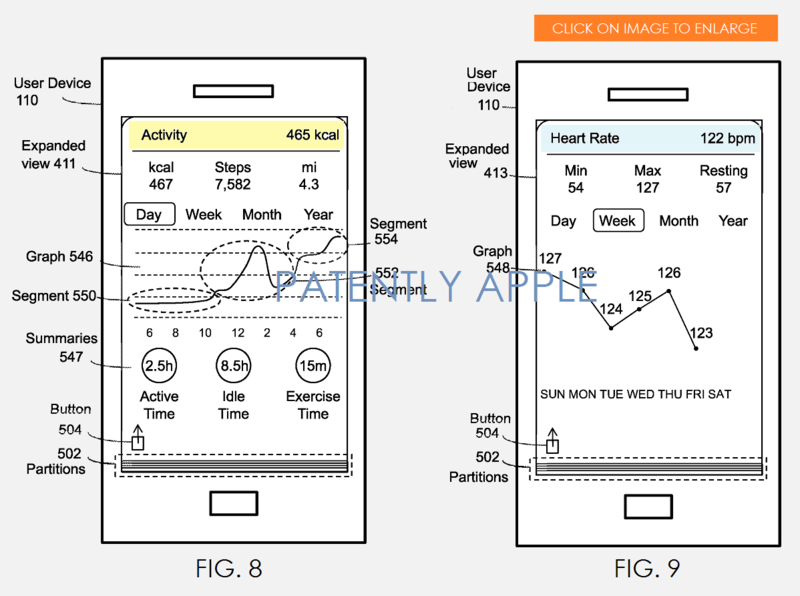 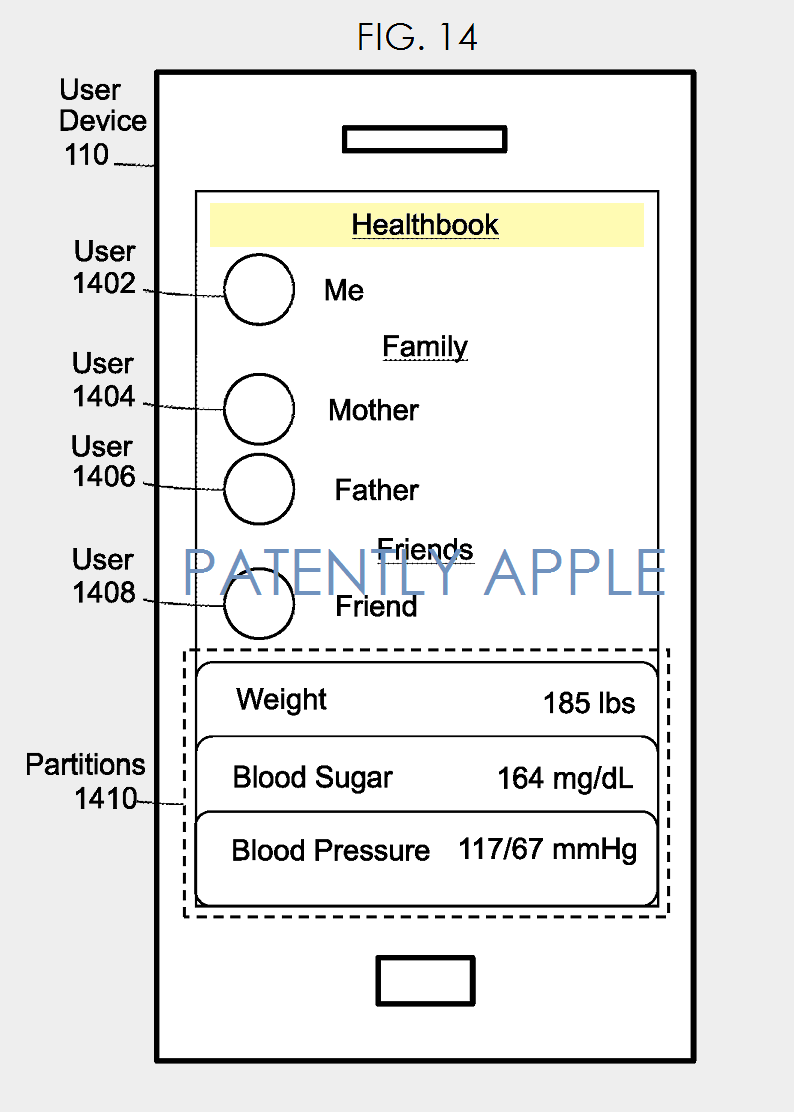 Apple's patent FIG. 14 noted below illustrates another example interface for viewing the wellness data of other users with an interface called "Healthbook." As shown, the interface can include a list of users that have authorized the use of the data to another, like a family member.

In some examples, the circles next to each user's name can be replaced with an image associated with the user. These images can be the same as those used in the user's contact list or can include another image.

Apple's third patent application published in Europe late on Thursday appears to relate to ResearchKit by its patent abstract as follows: The authorization from the user can be received in response to a request made by the querying entity and sent to the user by registry server #118 (of FIG. 1B of the second patent). The request can include a link or other selectable element that can allow the user to quickly opt-in to the study, thereby granting access to the user's wellness or non-wellness data. The link or other selectable element can be part of a user interface associated with Apple's Health app.

Apple adds that "Users can also proactively provide explicit authorization to some or all of their wellness data to selected research studies."

Apple's patent makes 26 legal patent claims relating to this invention that was originally filed for in December 2013.