While Apple Watch Sales are Slowing, they're Likely to Rebound Once they Land in Apple Stores in June

In early April I posted a report about the in-store reservation system for viewing and especially purchasing a simple Apple Watch as being complete overkill. I also noted at that time that the initial Apple Watch forecasts were falling, and in-part, likely due to this narrowly restricted method of accessing the product online. And though I later noted that the in-Store Apple Watch experience was perfectly paced, the fact remained that the inability of buying one in store, especially on impulse, was a lost sales opportunity.

Apple's VP of Retail Angela Ahrendts had confirmed in late April that Apple's iconic blockbuster product launches would continue in the future as usual. This was in response to many Apple fans displeasure of not being able to participate in the launch of the Apple Watch as they had in previous iconic product launches for the iPhone.

It's a little baffling as to why Apple chose this route, because the Apple Watch had been made available for sale in Europe by fashion boutiques that had iconic Apple fan line-ups – such as the one in Collette France. Was this a new gamble for Apple? Did that tactic really succeed? By the looks of new data that is emerging today, perhaps not.

Quartz is reporting today that while Apple Watch pre-orders had started off with a bang and that Apple's initial inventory had quickly sold out, the fact remained that US orders immediately fell off and have remained mostly flat ever since. The data for their report came from Slice Intelligence, a company that tracks US consumer spending through e-commerce email receipts.

According to Slice's projections, Apple has taken orders for almost 2.5 million watches in the US through Monday, May 18. The stats are derived from more than 14,000 online shoppers. More than half of those orders were placed on April 10, the first day Apple accepted watch pre-orders in the US and eight other countries, according to Slice. 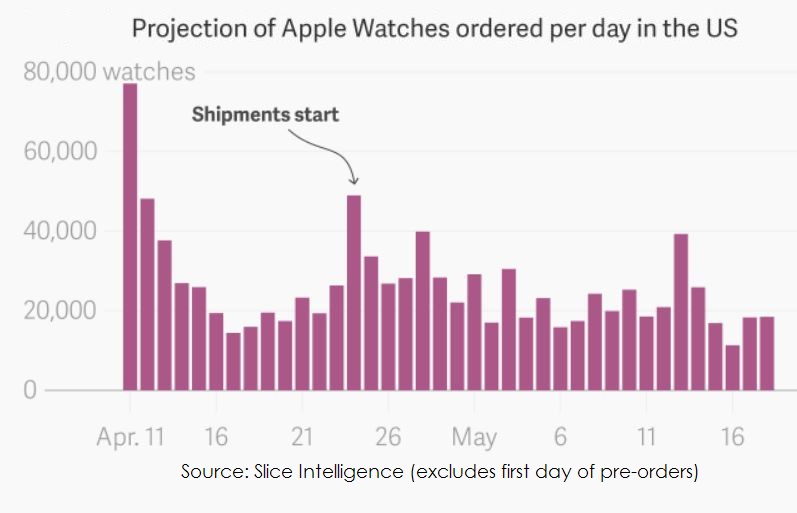 Since the first day—which we've excluded from this next chart to focus on detail—US orders have generally remained under 30,000 per day, according to Slice's projections.

The report noted that "One big question is how Apple Watch sales will change once people are able to simply walk into an Apple Store, try one on, and buy it. That hasn't happened yet."

Yes exactly, that's the very point that I was making back in early April. Apple needs to get the Apple Watch into the Apple Store to kick start that wave of impulse buying that the Apple Stores are so famous for.

The good news on this front is that Tim Cook reportedly stated during his tour in China that they're hoping to have the Apple Watch in stores by sometime in June. For now you could read the Quartz full report here and one of Splice's other Apple Watch reports here.