It's Hard to Believe, but Apple will sell more Watches in the first 60 days than the iPhone sold in its First Full Year

The Apple community along with its cult component have created a powerhouse movement that's almost impossible to stop. Any of Apple's competitors can only dream of creating such an army of loyal fans worldwide and unfortunate for Samsung, they can't copy it!

It really began when Apple's late CEO Steve Jobs introduced the iPhone back in 2007 – which seems like a lifetime ago. How well did the iPhone do in its first year? Well, not that well when you think of the staggering sales that Apple announced for their holiday quarter. Apple sold 74.5 million iPhones in a single quarter. Apple's first year of iPhone sales was only 5.41 million, according to the chart below from Statista. No matter how you slice the data, the iDevice revolution had a slow start. 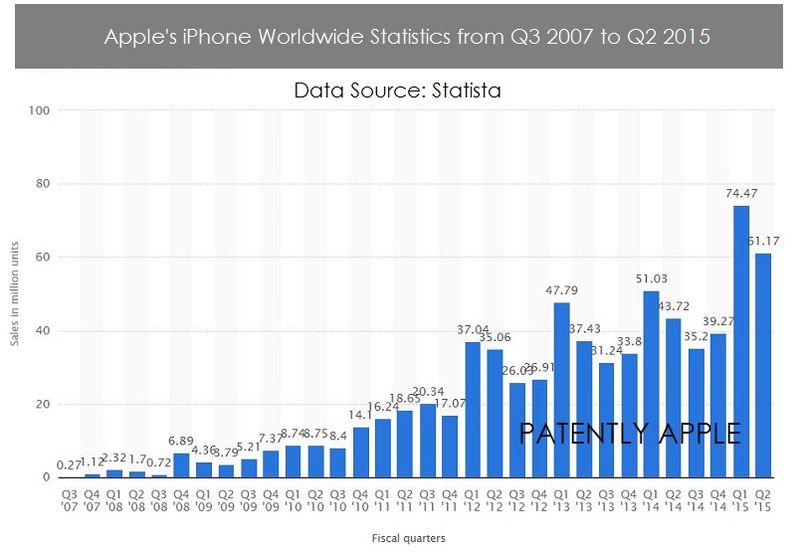 But over the years, Apple and their community, including those of us in the Apple blogosphere, built one-of-a-kind consumer phenomena. Apple's legendary, if not iconic blockbuster product launches have become worldwide events that tens of millions want to be a part of.

In 2007 Apple sold 5.41 million iPhones and now with their new Apple Watch, Apple will surpass that sales mark in just the very first month or two. Oh how times have changed. If Apple would have had enough supply, the numbers would have been staggering for a new product in a new category in the first week. And still, they're on track to sell more smartwatches than all of their competitors combined in 2014 in a quarter or two.

Back in 2007, no one took Apple's next wave of the internet revolution seriously. The idea of Apple beginning to sell a cellular phone was a joke to most in the industry especially Microsoft's Steve Ballmer – who laughs no more. Today, competitors fear Apple whether it's publicly or privately. Jean-Claude Biver, president of LVMH's watch division stated back in October that "Others have done smartwatches before, but when Apple does it, it will sell." And with Apple's World Wide Developer Conference coming up next month, there's bound to be even more to get excited about this fall.

In the end, it's just so hard to believe that Apple will sell more Watches in the first 60 days than the iPhone sold in its First Full Year. It's just one of those moments that you look back on and say wow, have times changed. Yet in many ways, it provides us with some perspective.