On May 7, 2015, the U.S. Patent & Trademark Office published a patent application from Apple that reveals methods for reducing the weight of a device housing without adversely affecting its structural integrity. We've all recently seen the new bend testing equipment from Square Trade used in testing smartphones from Apple, Samsung and others. As devices become thinner over time, it's necessary that they retain their structural integrity and Apple's invention demonstrates that they're ahead of the curve on this front. Whether this was used in any of the new Apple products such as the iPhone 6 and MacBook, or is something to be implanted in the future is unknown at this time.

As makers of electronic devices attempt to continually make devices increasingly smaller, innovative ways of reducing the weight of devices has become progressively more difficult to achieve. For example, while the overall weight of a device enclosure can be reduced by commensurably reducing the thickness of device enclosure walls, the reduction in wall thickness can reduce the ability of the enclosure to withstand normal handling. Accordingly, the walls will require a certain minimum wall thickness or rigidity to maintain a minimum structural integrity of the enclosure.

Apple's invention generally relates to reducing a weight of a device housing without adversely affecting its structural integrity. More specifically a method for embedding a stiffening layer within a metal substrate is disclosed.

In yet another embodiment, a method is set forth for encapsulating a stiffener layer within an aluminum substrate of a device housing to improve rigidity of the device housing. 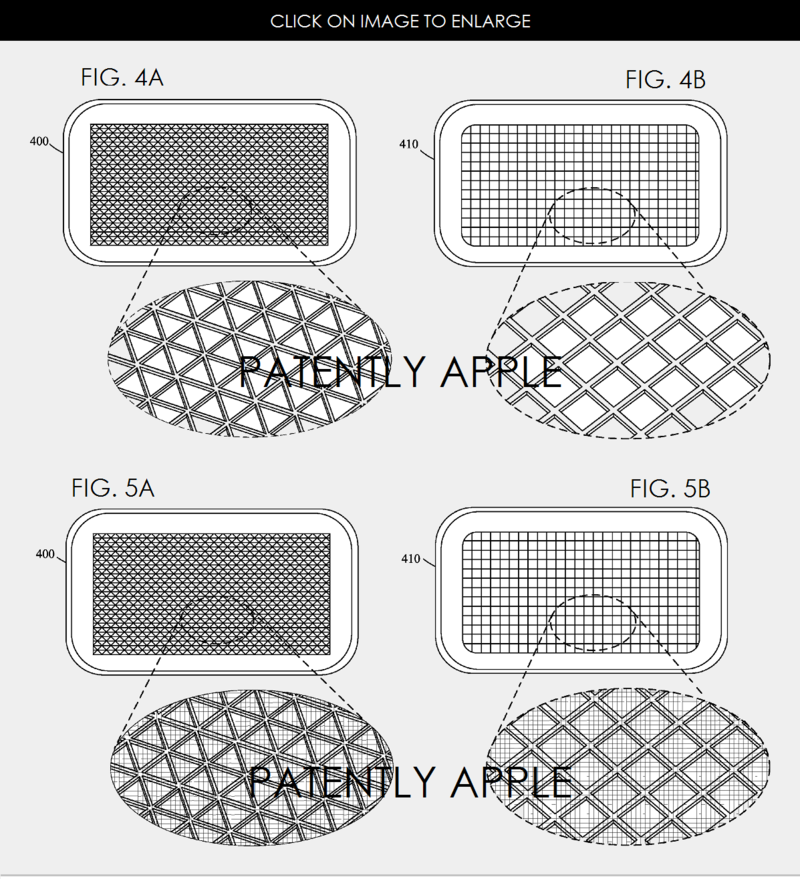 In Apple's patent FIG. 4B above we're able to see a rectangular pattern of pockets etched from housing #410. The rectangular pattern can also be operable to reduce a weight while maintaining structural integrity of the housing. In other embodiments, a number of circular patterns could be etched in an exemplary housing to achieve a similar weight reduction purpose. In some embodiments, the pattern of pockets can be etched by way of a chemical etching process.

Apple credits Collin Chan, Matthew Crowley and Jude Runge as the inventors of patent application 20150125636 titled "Encapsulation of a Stiffener Layer in Aluminum," which was originally filed in Q2 2014.