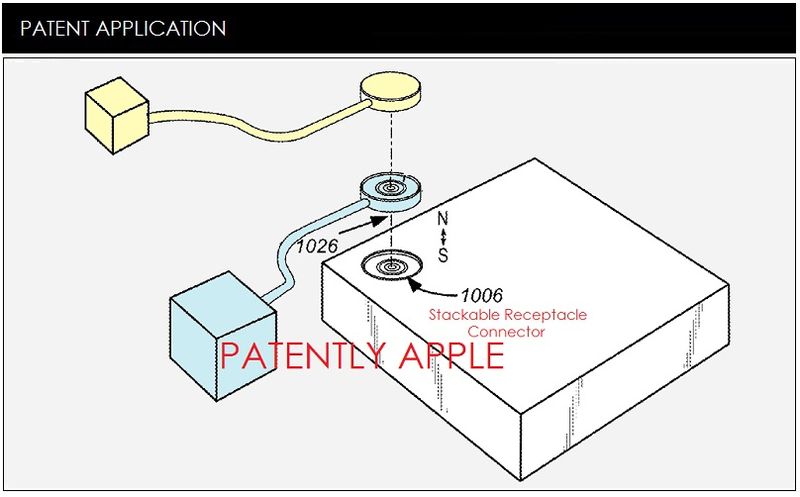 Earlier today we posted a patent report about a new connector titled "Apple Invents Inductive Charging Interfaces for Mobile Devices." The new connector used magnetic retention like MagSafe. In a second major patent relating to next-generation MagSafe connectors, Apple introduces us to stackable MagSafe connectors in a move to save space on hardware. Some thought that it was odd that Apple didn't extend the new USB Type-C to the MacBook Pro and MacBook Air. Although this may surface this fall, Apple might, and I stress might, want to introduce a better solution for pros in the form of stackable connectors. One of the connector styles presented in Apple's patent filing mirrors the new MagSafe connector that is being used with the Apple Watch, which proves Apple is well along the way in bringing this connector to market. Will they bring this to market for this fall? Only time will tell.

Wireless signal transfer to electronic devices can address some charging challenges. However, wired connections may still be required or preferred for the exchanging of signals in certain situations. For example, wired power charging and/or data exchanging may be quicker than their wireless counterparts, and thus preferable for quick charging or exchanging large amounts of data.

For example, a stackable connector interface with magnetic retention for electronic devices and accessories may allow power and data to be transferred between one or more stacked connectors and an electronic device.

Thus, embodiments of the present invention may allow one external connector of a device to concurrently connect with multiple connectors of peripheral devices, main devices, power adapters, and others. This may help to conserve limited internal device space as well as external surfaces of portable and even non-portable devices by only requiring or better utilizing one external connector without sacrificing functionality.

Apple's patent FIGS. 2A and 2B noted below are simplified perspective views of a connector body #200 including a stackable connector #202 that can be mated with a corresponding receptacle connector (e.g., connector 316, as shown in FIG. 3A), according to an embodiment of the present invention. Apple notes that "body 200 looks similar to an Apple MagSafe connector…" 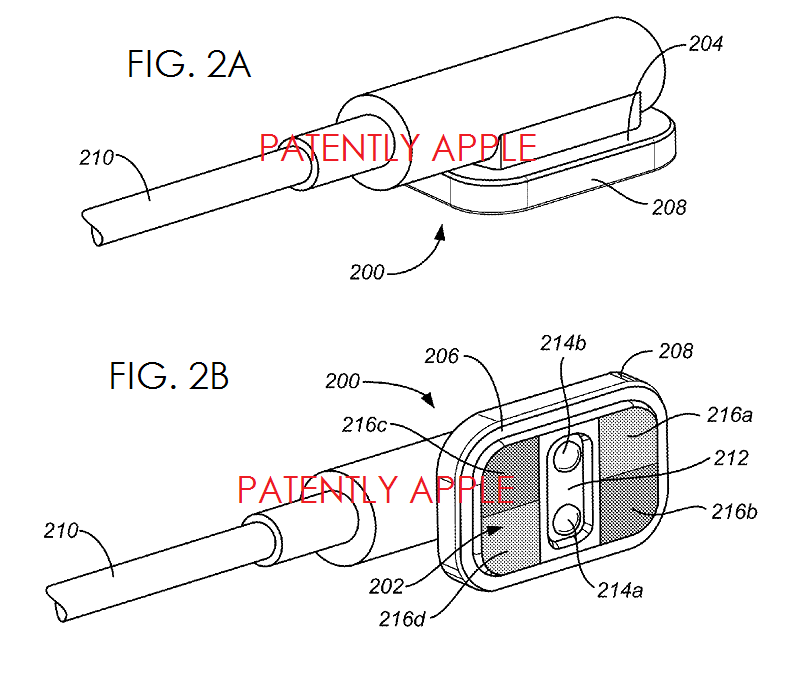 Apple's patent FIGS. 3A and 3B noted below illustrate unmated and mated stackable connectors, respectively, of base device #300, a first peripheral # 302 (e.g., earphones), a second peripheral #304 (e.g., a power adapter charger)and a third peripheral #305 (e.g., an external battery), according to an embodiment of the present invention.

As shown in FIG. 3A, the base device #300 includes a stackable receptacle connector #306 positioned within and disposed at an exterior surface (e.g., a side surface) of device housing #308. Although not shown in FIG. 3A, a front-side of device 300 may include a touch screen display, a speaker and a multipurpose button housed within device housing 308 that may be made from a metallic or a polymer material. 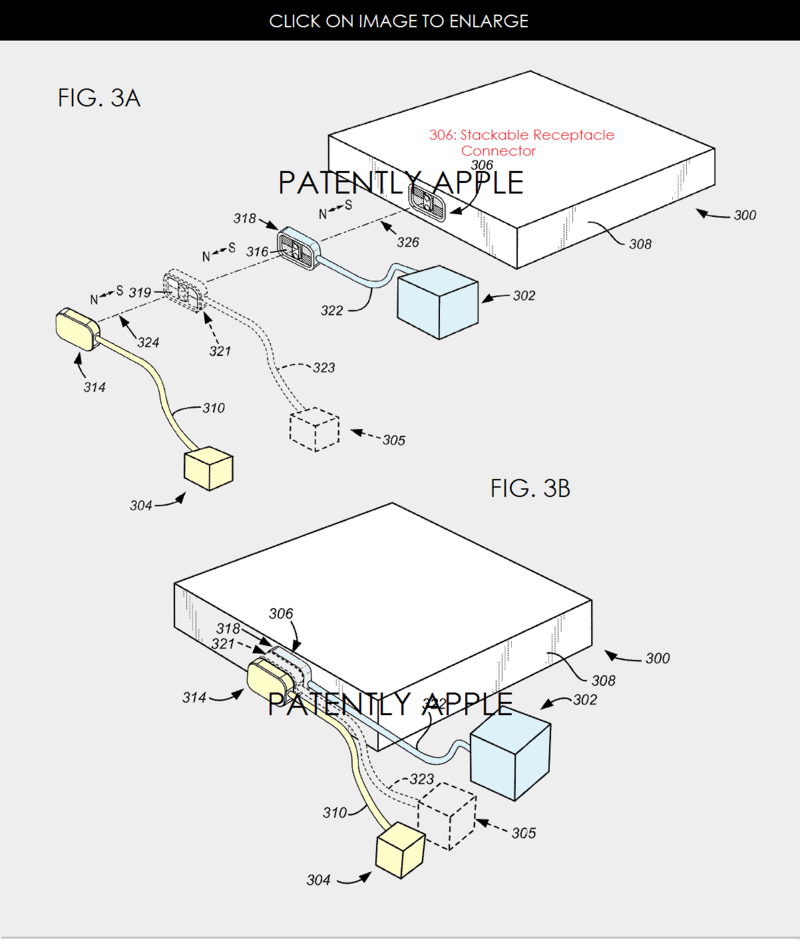 Apple notes that although device 300 is shown and described as one particular electronic media device, embodiments of the invention are suitable for use with a multiplicity of electronic devices. For example, any device that receives or transmits audio, video or data signals may be used with the invention. In some instances, embodiments of the invention are particularly well suited for use with portable electronic media devices because of their potentially small form factor. As used herein, an electronic media device includes any device with at least one electronic component that may be used to present human-perceivable media. Such devices may include, for example, portable music players (e.g., MP3 devices and Apple's iPod devices), portable video players (e.g., portable DVD players), cellular telephones (e.g., smart telephones such as Apple's iPhone devices), wearable devices such as the Apple Watch (smartwatches), video cameras, digital still cameras, projection systems (e.g., holographic projection systems), gaming systems, PDAs, desktop computers, as well as tablet (e.g., Apple's iPad devices), laptop or other mobile computers. Some of these devices may be configured to provide audio, video or other data or sensory output. 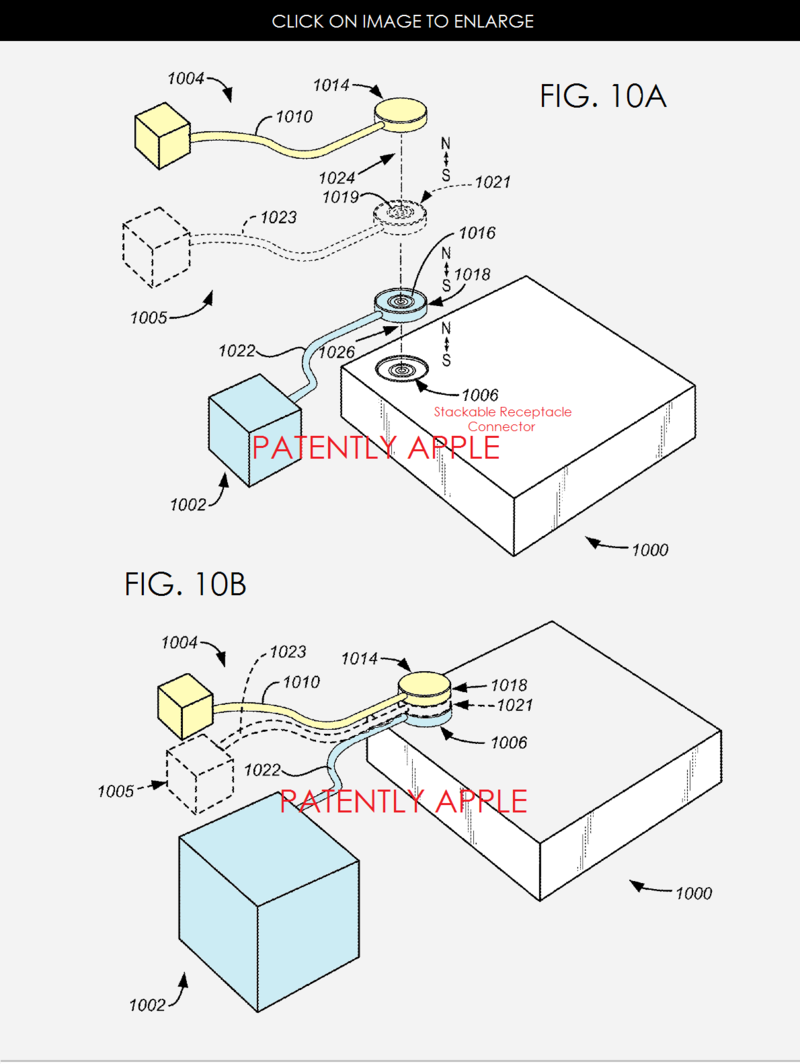 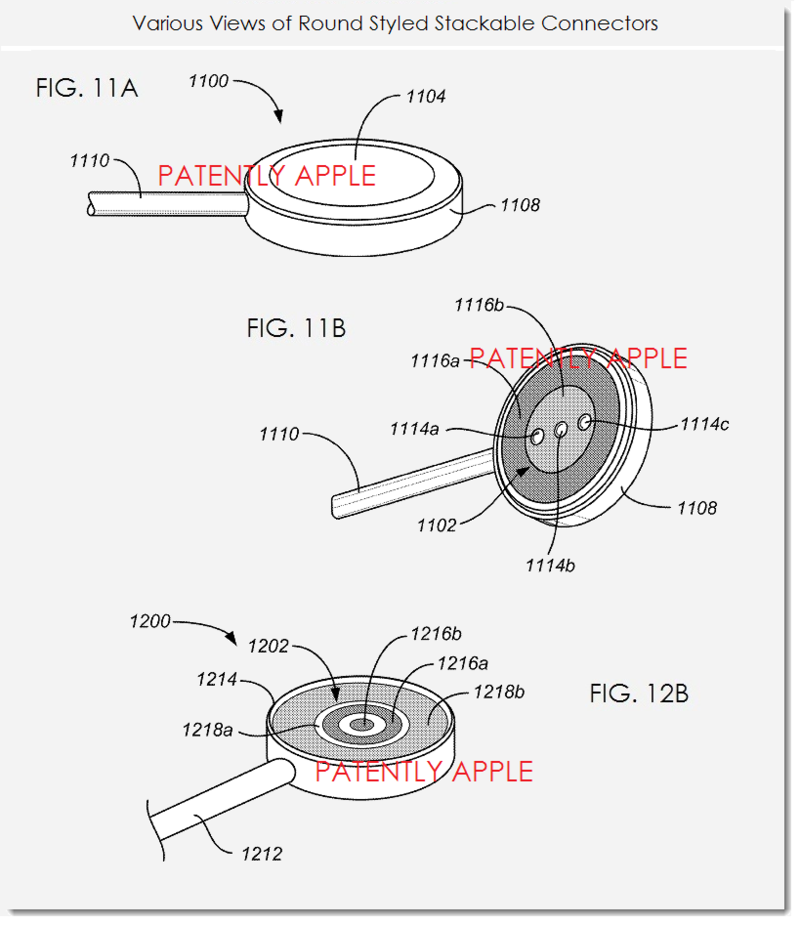 While not stackable, the round designs as noted above take on the look of the new MagSafe charging connector for the Apple Watch as noted below. So half of the design is already in play. 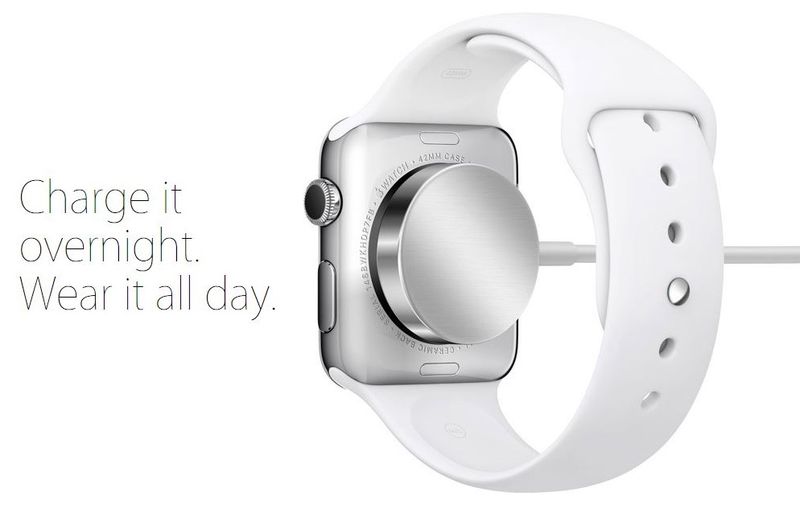 Apple's patent was originally filed in September 2014 and published today by the U.S. Patent Office. 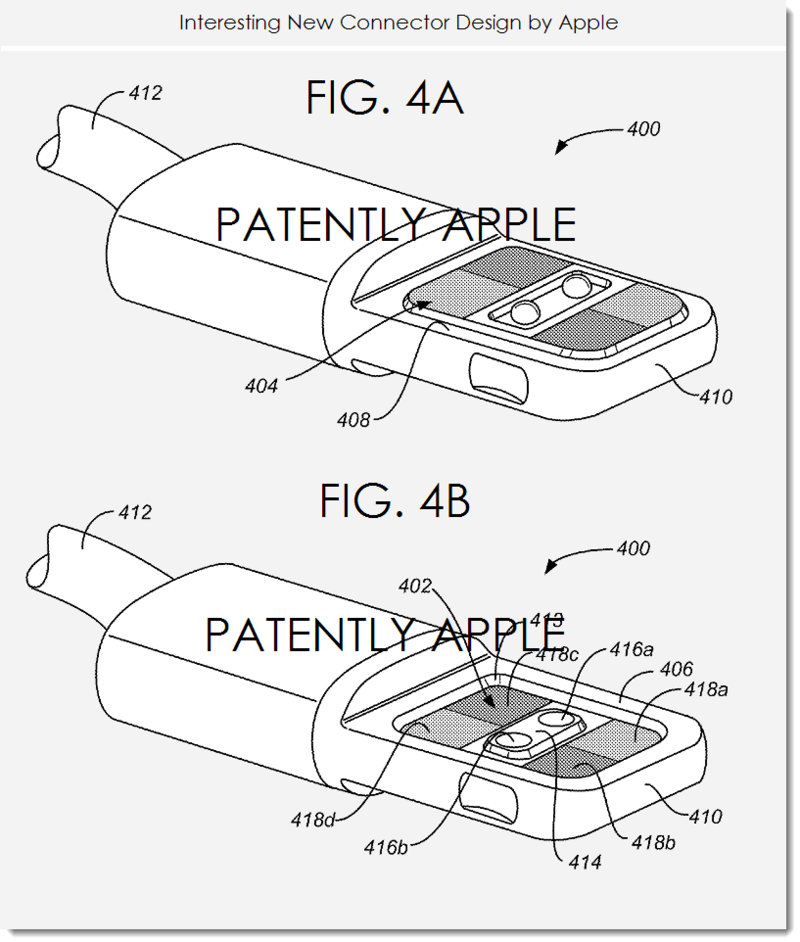 Apple's patent FIGS. 4A and 4B are simplified perspective views of two orientations of a connector body #400 that includes first and second stackable connectors #402, #404 that can be mated with corresponding connectors. It's an interesting design in that it looks like a combination of Apple's Lightning and MagSafe connectors.