On April 16, 2015, the U.S. Patent & Trademark Office published a patent application from Apple that reveals a possible future Apple TV remote that includes a touchpad/gesture pad that could operate in both gesture and character modes. The Apple TV remote really needs to be updated and if Apple is bringing new TV channel bundles to Apple TV this fall, then this new remote concept is one of the options that Apple may use if they don't use Siri or other methodologies to control Apple TV this fall. 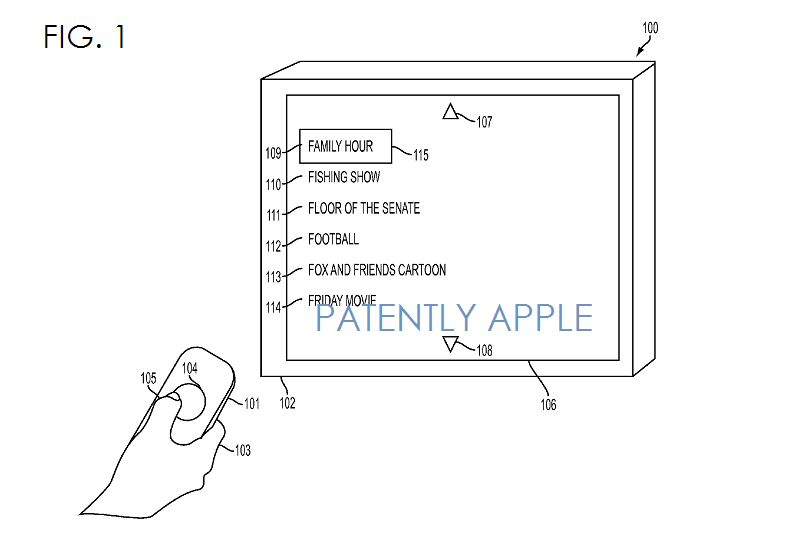 According to Apple, a touch sensor of an electronic device that may be used to navigate one or more presented lists may be operable in at least a gesture mode and a character mode.

In the gesture mode, one or more touches detected by the touch sensor may be interpreted as gesture input for navigating the list. In the character mode, the touches may be interpreted as character input for navigating the list. The touch sensor may switch between the gesture mode, the character mode, and/or one or more other modes. 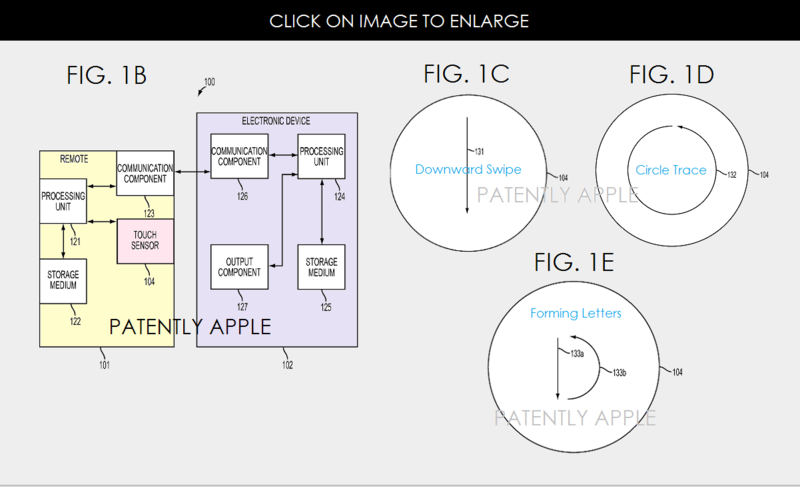 The downward swipe noted above is help users be able to quickly move around the Apple TV interface. The Circle Trace is designed to instruct the remote that you are moving from gesture mode to character mode. Once in character mode, noted as FIG. 1E above, a user can enter the first letter of a TV show for example, as in "D" for Downton Abbey" and Apple TV will bring you to all shows in "D" very quickly. Although they don't say it, obviously entering in more letters such as "DOW" would likely bring you directly to the Downton Abbey.

Creating the touch wheel to use characters means that it could be set to other languages be it Spanish, Chinese and so on to call up programming quickly.

Although the present invention is illustrated and described as utilizing the gesture mode and/or the character mode to navigate one or more lists of TV shows, it is understood that this is an example. In various cases, one or more of these modes may be utilized for various other purposes.

For example, character entry mode may be utilized when a user enters a password on a remote control device that includes a touch sensor. In this way, the user may be able to actually enter the characters of the password instead of selecting characters from a virtual keyboard or other user interface displayed on a screen and the user may be able to keep their password secret from people able to see the screen. Whether Apple would incorporate Touch ID into the remote as well is unknown at this time.

Apple credits Ray Chang as the sole inventor of patent application 20150106764 which was originally filed in Q4 2013. Considering that this is a patent application, the timing of such a product to market is unknown at this time.