The Phablet: The Ultimate Media-Consumption Device

After Apple launched the iPhone 5S in September 2013 I wrote a post titled "Apple Passing on a larger iPhone Display still a Head Scratcher." Months earlier, Apple's Phil Schiller had mocked Samsung's shift to a larger display size for a smartphone by saying that it's "really easy to make a new product that's bigger. Everyone does that. The challenge is to make it better and smaller." Apple was the only smartphone vendor at that time stuck in time with a tiny 4 inch display. It was truly baffling, especially with Schiller mocking the Phablet.

In May 2014 we posted another report titled "Apple Missing Out on the Explosive Growth of Smartphones with Larger Displays." In that report we showed the stats were against Apple's thinking and an internal Apple slide that acknowledged the trend that they had missed. Of course Apple finally launched a Phablet called the iPhone 6 Plus later in September and their sales roared and soared to all-time highs because of the Phablet being so popular in key Asian markets like China and South Korea. Apple's iPhone 6 Mania swept the globe to become the number one vendor worldwide overtaking Samsung in the fourth quarter – because of the addition of the iPhone 6 Plus.

This week a new report surfaced and presented some very interesting stats about the power of the Phablet in the market today that's worth noting.

Since Apple launched the App Store in July 2008, media consumption on smart devices and in apps has skyrocketed - it has even surpassed the web and TV in total time spent. First, smartphones, led by the iPhone, started taking share from online media consumption on the web. Then the tablet, led by the iPad, accelerated that trend. In fact, in January 2010, Flurry analytics labeled the iPad as the "second-stage media booster rocket." It helped its predecessor the iPhone shift media consumption (and ad dollars) from TV and desktop to mobile. As if that shift weren't fast enough, this year a new type of device accelerated this trend: the phablet. 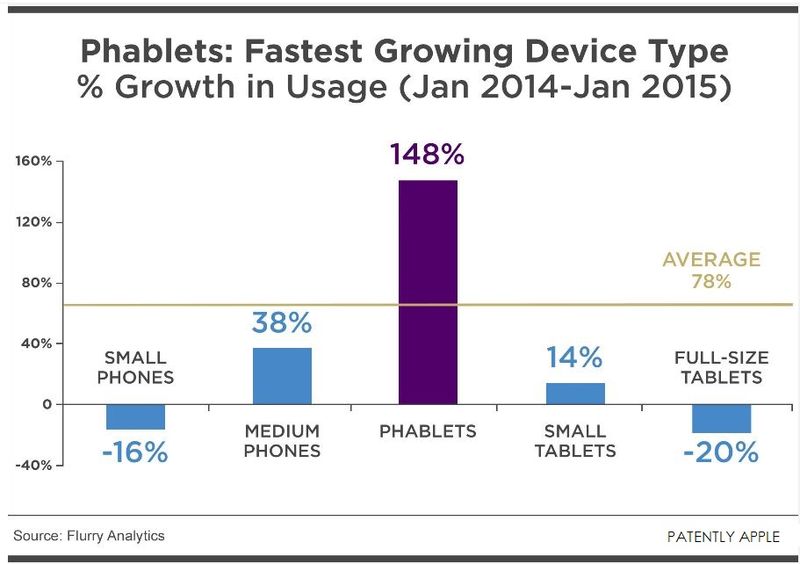 Flurry recently examined usage by form factor from January 2014 to January 2015 and found that phablets, such as the iPhone 6 Plus and the Samsung Galaxy Note, take the lead in usage growth, growing 148% year over year and propelling the overall mobile and app industry to 78% year over year usage growth. This is 3.8 times faster than the growth of medium-sized phones such as the iPhone 4 and iPhone 5 over a similar period.

During that same period, small tablet use grew only 14% and full-size tablet usage shrank by 20%. While this is only one year's worth of data, the trend indicates that the Phablet has become a killer form factor, combining the tablet's bigger screen and ease of navigation with the true mobility of the phone. 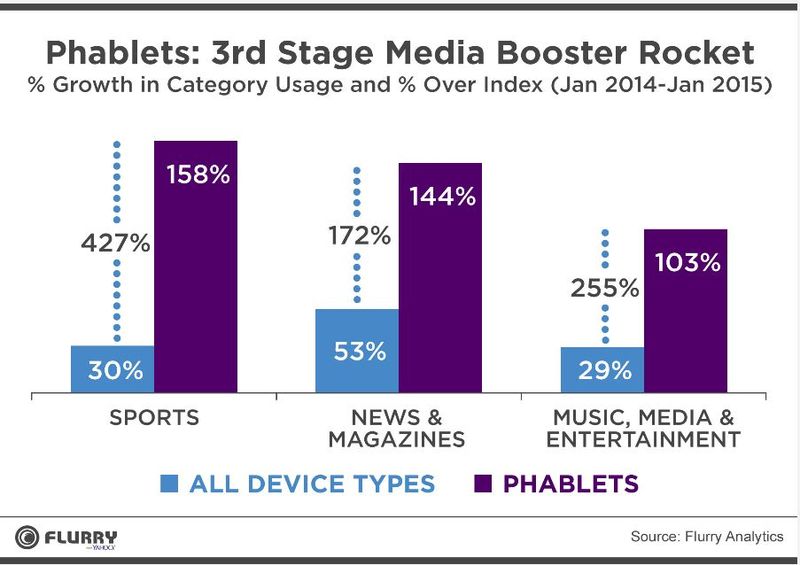