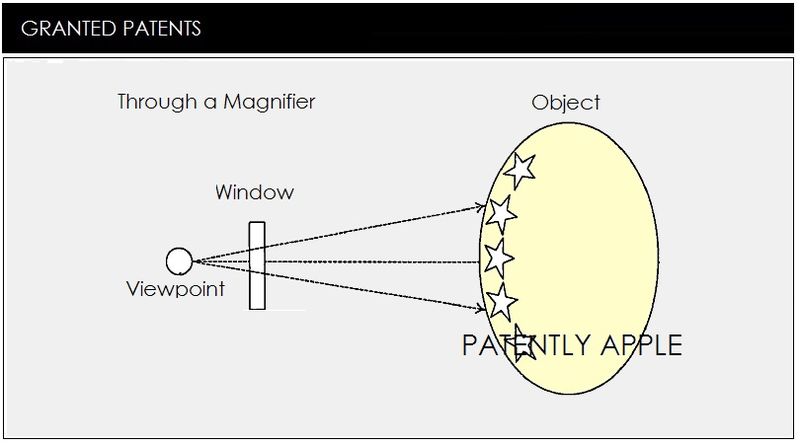 The U.S. Patent and Trademark Office officially published a series of 36 newly granted patents for Apple Inc. today. In this particular report we cover a single patent that Apple has acquired from 3 North Carolina engineers represented by the law firm Ober | Kaler. The granted patent covers a user interface that allows control of the image (scrolling and magnification) on the device display by uniquely tilting the device. If Apple went out of their way to acquire this patent, then there's obviously some new camera application that Apple is thinking of implementing in the not-too-distant future.

Apple's newly granted patent covers their invention relating to user interfaces for hand-held electronic devices with displays and, more particularly, to a user interface that allows control of the image (scrolling and magnification) on the device display by tilting the device.

The user interface is suitable for use in cellular phones and personal digital assistants (PDAs), PC Tablets, as well as laptops, PCs, office equipment, medical equipment, or any other hand-held electronic device with a user interface that includes the viewing of documents, pictures, maps, or similar images.

Overview of the Invention

There are several conventional techniques for allowing a user to "scroll" a displayed image so that the user can see one portion and then move to the next (or some other) portion to see. There are also standard ways to "zoom" the display in and out, so that a user can either see all (e.g., an entire page or several pages at once), or only a portion (of one page), depending on what he wants to see and the size of his display screen. Almost all conventional methods and devices have separate controls for zooming and for scrolling.

Scrolling is not limited to documents inasmuch as pictures of objects, maps, etc. may all be displayed in a similar fashion. Thus, scrolling and zooming are the standard terms used for specific operations to look at different parts of a display regardless of what kind of image is displayed.

Some hand-held devices are now capable of detecting the amount that they are tilted with respect to vertical, and allow the user to control various features on the device by tilting it. What can't be done today is control the magnification or perspective of the image.

The motion-sensitive controls of the current invention provide a user interface that is more natural than current common controls because it allows a user to see more of an image at one time than traditional scrolling, viewing it in perspective so that he can relate new portions in view with portions that were in view already, and doing so with perspective views with which the user is already familiar. In addition, the motion-sensitive control simultaneously allows the user to change the magnification of the image using movements that are compatible with the tilt movements.

In order to use the current invention, the user places the device in "tilt control mode" by starting a particular program, pressing a button, inputting a command, or by any other means for indicating that the control of image display is to be controlled by the tilt actions of the user. Once in tilt control mode, the current invention defines movements of the entire hand-held device to control the perspective of view of the virtual object represented on the display.

The net visual effect is similar to looking at an object through a camera while viewing a display on the back of the camera; the image being viewed changes, and the perspective of the image also changes. If the camera were looking straight down at a large document on a table, and the user turned the camera, the user would be able to see more of the document in the direction turned, and portions of the document in the new view would appear further away from the camera than other portions.

Apple's patent FIG. 1 presented below shows us the viewing of an object in two ways: how a person at a particular viewpoint would view the object through a window, and a rectangle that represents a screen showing what that person would see; FIG. 2 shows the same two perspectives as FIG. 1, but with the person using a hand magnifying glass.

Apple's patent FIG. 3 presented above shows us the same two perspectives as 1 and 2, but with the viewpoint altered off-center from the alignment of the middle of the window and object. The result is that the view shows all of one side of the object, and less of the other side; and lastly, FIG. 7 shows the same two viewpoints as FIG. 3 for the case where the view of the object travels in an arc around the object, allowing the user to see different sides of a three-dimensional object.

In a manner similar to that for moving a camera, the current invention defines these motions of a hand-held device to cause the virtual object display software to change the object view in a way similar to that of corresponding camera movements. The perceived size and distance from the virtual object may make it difficult to make a circular motion in scale, so the movements are defined such that approximating the movements around the virtual object are scaled down to those that can be made using the arms and hands of a user holding the hand-held device. The user might well perceive this as looking at an extremely detailed, but small, model of the object.

It should now be apparent that the current invention effectively allows a user to use movements of a handheld device such as a cell phone to change the view, change the magnification, or both concurrently, by moving the device. This eliminates the need for separate controls for the scrolling and magnification changes. It also provides a user interface that is more natural than traditional scrolling, by allowing a user to see more of an image at one time, in perspective, and simultaneously allowing control of magnification.

Apple credits Ralph Cook, Anders Moine and Joseph Carsamaro as the inventors of granted patent 8,994,644 which was originally filed in Q3 2008 and published today by the US Patent and Trademark Office.