Surprise! The iPad holds a Whopping 83% Market Share in Korea

Apple's iPhone 6 growth has been so earth shattering to Samsung that the Korean Government is stepping in to find ways to thwart Apple's future growth in that country. Samsung, being one of the largest employers in that country, has a lot of sway with the government. Samsung thought that pushing the government to force wireless carriers to stop smartphone subsidies would surely hurt Apple with their high priced iPhone 6 and especially the iPhone 6 Plus. That didn't work out as planned as you could see in the iPhone 6 chart below where we see that the iPhone 6 shattered the record for smartphone sales in Korea by a foreign company. 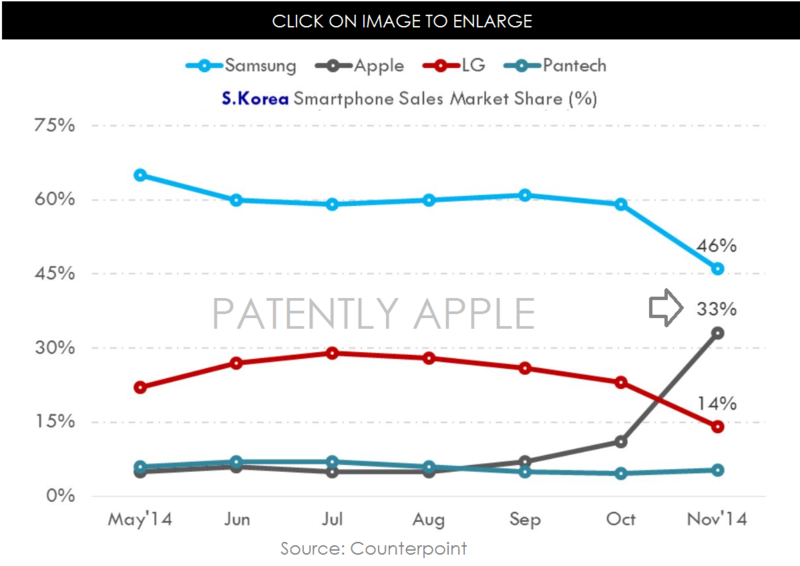 Earlier this month we posted a report titled "Korea's FTC has created a Task Force to Determine Whether Apple and Google are Damaging the Korean Market." That task force was initiated by both the Korea Fair Trade Commission (FTC).

To assist the task force created by Korea's FTC, new data was made public yesterday that will go a long way in swaying the government task force to introduce draconian measures and government regulations to thwart future growth by U.S. companies like Apple, Windows and Google

In a new Korea press report published today they quote some of the statistics from the government agency's report. The report found that last year, Microsoft, Google, and Apple were found to monopolize ecosystems for computer and mobile devices, and a software ecosystem in the country, including web browsers, using their monopolistic position in the operating system (OS) market.

More specifically, the data released yesterday by the Korea Internet & Security Agency (KISA) and the Ministry of Science, ICT and Future Planning, the monopoly and lock-in effects deepened in the local OS and web browser markets last year.

While we don't know what the final government report will suggest, setting it up in the press to make the U.S. companies look like the evil monopoly trying to control the Korean market is a way to justify draconian measures to eliminate that threat. Of course with Samsung working with Google and Microsoft, Apple is the odd one out and so the report is likely to focus on the mobile device threat first.

We'll stay on top of these developments as more news emerges, but until such time we can enjoy the fact, the surprising fact, that Apple owns the tablet market by numbers that even took me aback. So now we see the "sudden" rise in iPhone 6 sales has a secondary reason for the recent spike in sales in South Korea.

Apple had to have a phablet to take on the popular Samsung Galaxy Note and the iPhone 6 apparently hit the nail on the head. But owning 83% market share of the tablet market in South Korea shows us that there were a lot of happy iOS fans in Korea sitting in wait for the right product to come along, and it did.

In the end, we better enjoy Apple's success in South Korea while we can because Samsung and their government henchmen are bound to spoil the party going forward. In fact, the government better hurry up because Apple Watch is coming in April and it's bound to bury Samsung's Gear smartwatch in just the first quarter on the market and send further monopoly shockwaves through that country and especially through the halls of Samsung's Kingdom.