Only one day after a Tyler Texas jury awarded Smartflash $532.9 million for Apple infringing their suit of patents, Smartflash LLC and Smartflash Technologies Limited filed a second patent infringement lawsuit against Apple. The lawsuit actually mentions the verdict of February 24, 2015 as proof of Apple's guilt. In the new case, while listing the very same patents used against Apple in the first trial, they've added a single new patent that Apple has allegedly infringed. In total there are seven patents listed in this new case.

The following is from Smartflash's lawsuit filed with the Tyler Texas court. This segment of the lawsuit is titled "Factual Allegations" and in-part is noted as follows:

About 90% of the remainder of this new lawsuit repeats itself from the first lawsuit that you could be reviewed here for details. In this current case, the differences are as follows. 1. They removing all references to Game Circus, Hero Academy, WizardBlox, Grub Guardian and other gaming company and/ or title references. 2) They've added a single new patent to the lawsuit which is patent 8,794,516 which was granted to them after the original trial had begun, and 3) the list of the infringing device has been modernized as noted further below. 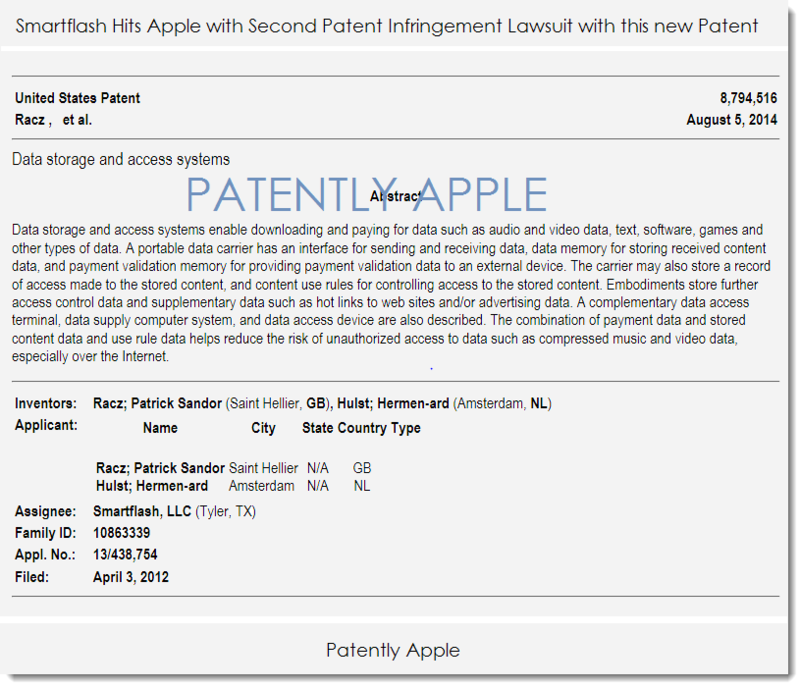 Apple has committed and continues to commit acts of infringement under 35 U.S.C. § 271 with (i) its iPhone 6, the iPhone 6+, iPad mini 3, and iPad Air 2 devices containing any version of iTunes that can access the iTunes Store and/or any version of the App Store app; and (ii) Apple's internal servers, including those involved in operating Apple's iTunes Store, including Apple's App Store, as well as Apple's servers involved in Apple's in-application payment functionality or availability of iTunes Store, App Store, or content via iCloud as well as Apple's servers involved in Apple's iAd Network (collectively referred to as "Apple's Accused Instrumentalities").

The patent infringement case presented in today's report was filed in the Texas Eastern District Court on February 25, 2015. At present, no Judge has been assigned to the case.

No news has yet surfaced regarding Apple filing an appeal regarding the original case which Apple's legal counsel vowed would occur after the verdict was handed down.