The U.S. Patent and Trademark Office officially published a series of 41newly granted patents for Apple Inc. today. In this particular report we cover a single patent that Apple acquired in their acquisition of PrimeSense. This virtual keyboard patent packs a punch considering that HP's new Sprout computer is now capable of projecting a virtual keyboard onto a special pad in front of their special desktop computer. A video shows this interactive keyboard in action which is quite impressive.

Apple's newly granted patent that was inherited from PrimeSense covers an invention that relates to a method of executing a non-tactile three dimensional user interface and a virtual keyboard.

Apple's patent FIG. 1 is a schematic, pictorial illustration of a non-tactile 3D user interface (also referred to herein as the 3D user interface) for operation by a user of a computer. The non-tactile 3D user interface is based on a 3D sensing device #24 coupled to the computer, which captures 3D scene information of a scene that includes the body or at least a body part, such as a hand 30, of the user. The device (#24) or a separate camera (not shown in the figures) may also capture video images of the scene. The information captured by the device is processed by a computer which drives a display.

The 3D user interface can be configured to track the user's hand and to position a cursor on a display at positions indicated by the hand's position. In one embodiment, the user can input a given virtual key by keeping the hand relatively steady as the cursor is presented over the given virtual key for a specified time period.

In an alternative embodiment, as the user makes a smooth change of direction of a trajectory of the hand, the 3D user interface can apply a language model to select a given virtual key that the user intended to input. 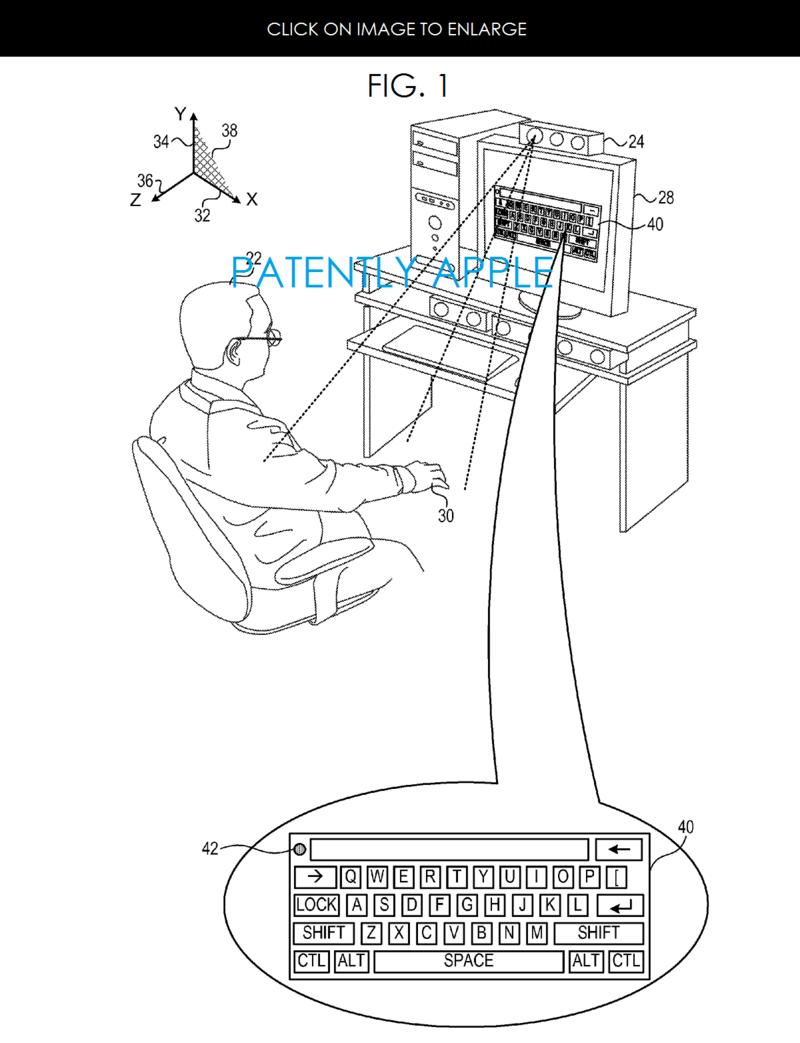 You can't judge the invention by the general patent graphic that's simply to convey a concept and not the final look or approach to the invention. For instance, HP's new Sprout desktop computer noted below integrates Intel's "RealSense" 3D camera in its overhead arm that projects an interactive keyboard a special touchpad (see the video below at the 35 second mark to see the virtual keyboard in action).

Whether Intel's "RealSense" is using "PrimeSense" 3D technology is unknown at this time but there's a good chance. The concept is the same so this is now something that Apple could use in the future.

This is no longer a theory, it's a workable invention. Apple has worked on virtual keyboard concepts in the past, so PrimeSense's technology may accelerate their project.

The concept can also be extended to present a virtual piano keyboard which would support GarageBand quite nicely. 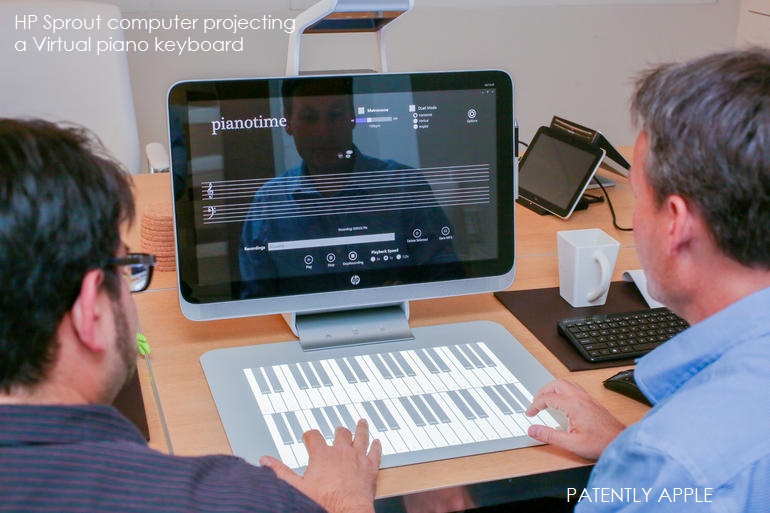 Apple credits Micha Galor, Shai Litvak and Erez Sali as the inventors of granted patent 8,959,013 which was originally filed in Q3 2011 and published today by the US Patent and Trademark Office. To review today's granted patent claims and details, see Apple's patent.