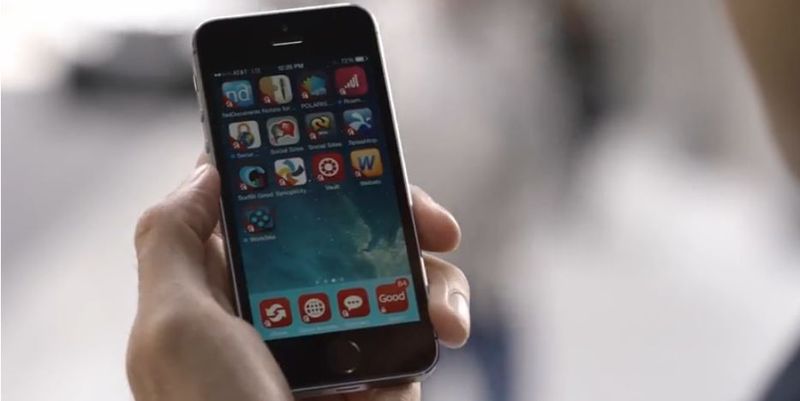 A new report published today by Good Technology™, the leader in secure mobility, presents key findings indicating that as enterprises are mobilizing content and apps, they are also fortifying their cyber resiliency with accelerated activations of secure mobile apps, which grew 65 percent during the fourth quarter and 300 percent during the year. In this report we once again find that Apple's iOS led the way in activations in the enterprise.

Christy Wyatt, chairman and CEO at Good Technology states in their report that "One of the biggest challenges CEOs and boards are facing today is understanding how to best mitigate cyber risks. The end user is often the weakest link in any security model. Ensuring employees, customers and partners are using secure-based apps across mobile workflows is one critical component in building cyber resiliency across any organization."

The report further noted that as CIOs adopt BYOD (bring your own device) and COPE (corporate-owned personally-enabled) deployment models, the mix of devices being introduced into the enterprise continues to shift. This quarter's results showed that iOS increased from 69 percent to 73 percent of all activations during the quarter, riding the momentum of the September launch of the iPhone 6 and iPhone 6 Plus. 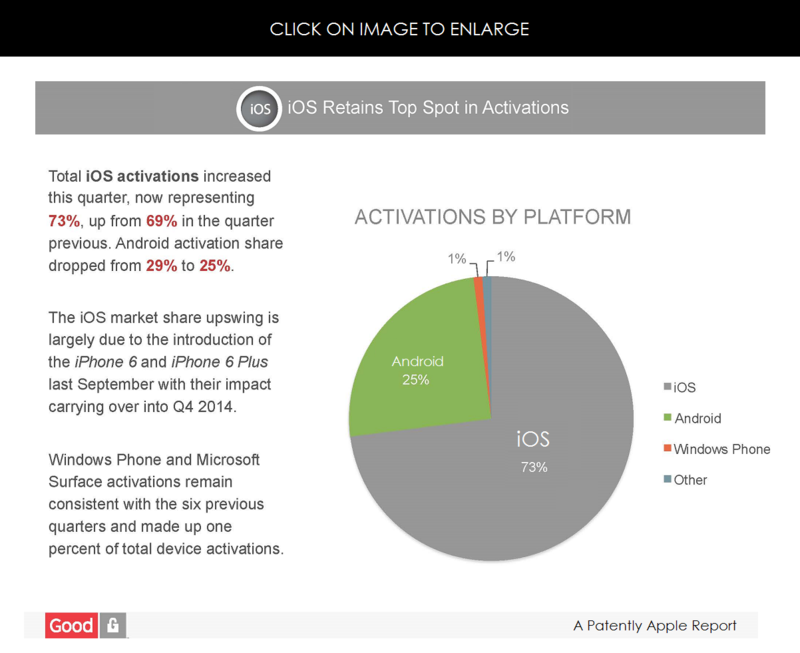 In stark contrast, Android market share declined to 25 percent, while Windows Phone and Microsoft Surface held one percent of the market share in total device activations.

Over time the Apple-IBM alliance will be leading in other areas that are being targeted this year such as healthcare, banking, travel, transportation and telecommunications along with energy and utilities and industrial products that Apple's CEO Tim Cook noted in their January Financial Conference Call.

Below are a few of the great charts from Good Technology's new report that illustrate some of the key trends in the enterprise that they've tracked.

The Most Popular Device: Apple's iPhone 6 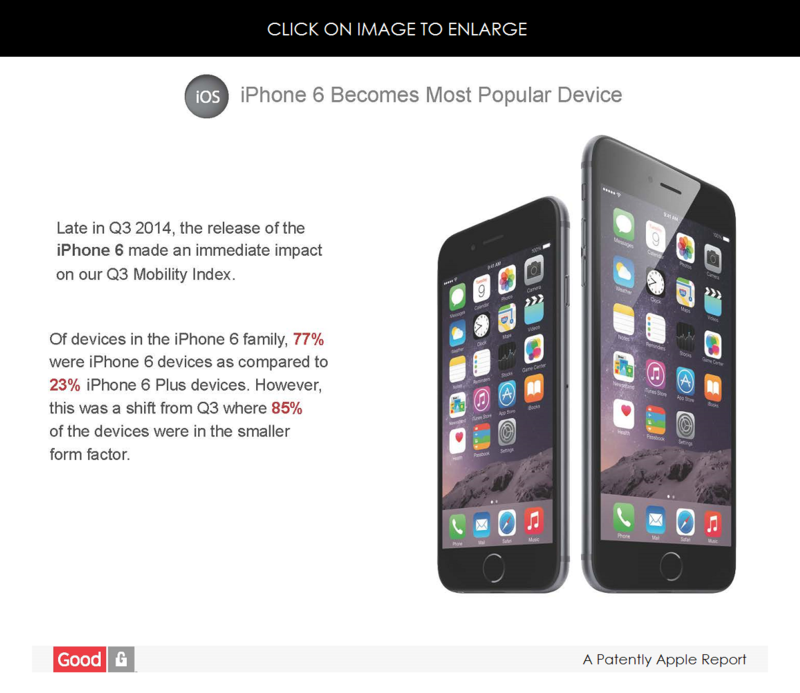 The Top 5 App Categories across Devices 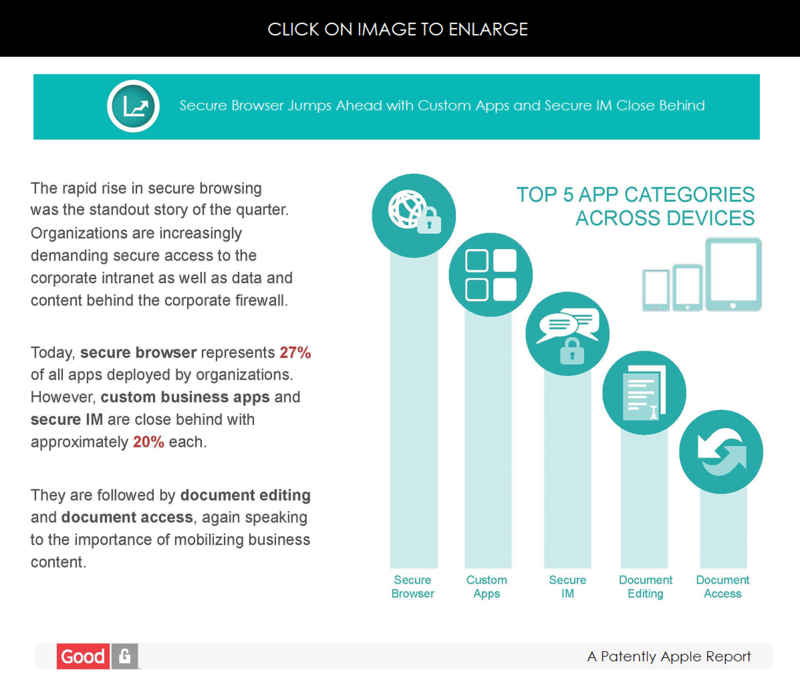 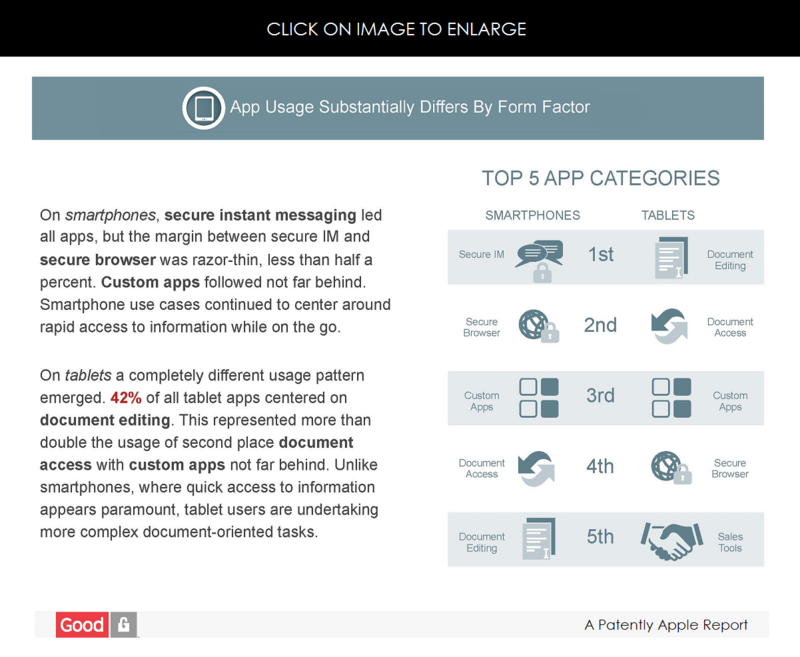 Good Technology serves more than 6,200 organizations worldwide, including 100% of the FORTUNE 100 commercial banks, aerospace and defense firms and more than half of the other FORTUNE 100 companies.

The metrics cited in this report have been directly generated from Good's internal data, as aggregated from all devices activated across Good's worldwide customer base in Q4 2014. Good analyzed activations, by month, among all its global customers that had at least five activated devices over the quarter, to draw conclusions on the overall trends for net new activations across iOS, Android and Windows Phone and Microsoft Surface platforms.

Side Note about enlarging graphics: in some browsers you may have to click once on the image to get a first enlarged image and then a click on the image a second time in order to enlarge it fully)