IBM Granted Most Patents in 2014 with Apple in Eleventh Place

Today the leading producer of global patent databases, analytic solutions and innovative web services released its annual tabulation of the top U.S. patent recipients for 2014. Another banner year for the patent world, 2014 saw annual U.S. patent grants increase by more than 8 percent reaching an all-time high of 300,678 and surpassing the 300,000 mark for the first time.

The company has posted the official 2014 IFI CLAIMS Top 50, a ranking of global companies and organizations to receive the most utility patents from the U.S. Patent and Trademark Office (USPTO).

As noted n the chart below Apple came in at number 11 in the top 50 with 2003 granted patents. In 2013 Apple was in the the number 13 spot. So there was a slight improvement noted.

For all of the Androiders who have screamed over the years that Apple was patenting everything under the sun and that they should instead compete in the marketplace – should now note that their beloved Samsung is listed in the number two spot with 4,952 granted patents issued to them in 2014. It's funny how reality bites. 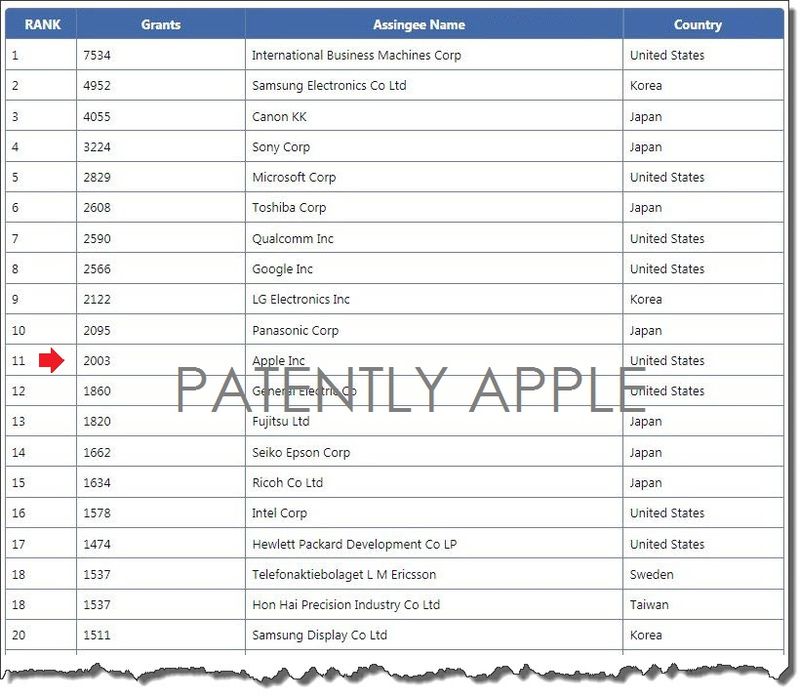 IFI's tabulation places IBM at the top of the list where it has been for 22 consecutive years. Garnering 7,534 patents and up 10.6 percent over 2013, IBM is the first company to break the 7K barrier for a single year. Samsung is second with 4,952, up 5.9 percent; Canon is third, up 6 percent; Sony fourth, up 4 percent; and Microsoft fifth, up 6.3 percent.