On January 15, 2015, the US Patent & Trademark Office published a patent application from Apple that discusses how GarageBand, Logic Pro or combination of these apps can create unique and customized drumming loops for various music genres. Apple's patent application was originally filed in July 2013 and published for the public viewing today.

Apple notes in their patent filing that drum machines and sequencers have long been used to generate rhythmic accompaniments for musicians lacking access to a full band, drumming proficiency, or a convenient means of recording drumming performances. Musicians typically used prerecorded or "canned" drum loops or drum samples to create drum tracks. Although drum sequences using canned loops can be easy to create, they are extremely limited in their application.

For example, canned loops tend to sound formulaic and repetitive. Also, drum loops may be limited in their applications. For example, drum loops at 100 beats-per-minute (BPM) may not be useable at 130 BPM without significant sample editing and waveform manipulation (e.g., slicing, cutting, etc.).

In Apple's patent FIG. 6A noted below we're able to see a file for a plurality of selectable drumming styles #610 (alternative, indie rock, soul, R&B and songwriters) for a variety different musical genres to be applied to a rhythmic accompaniment, according to an embodiment of the invention.

Drumming styles can be used as a macro or preset to quickly select and filter certain desired musical characteristics from a vast assortment of possibilities. The drum styles may include a particular genre of music, micro-timing and micro-dynamic characteristics, kit piece elements (e.g., type of drum kit, types of drum pieces used, etc.), and the like. 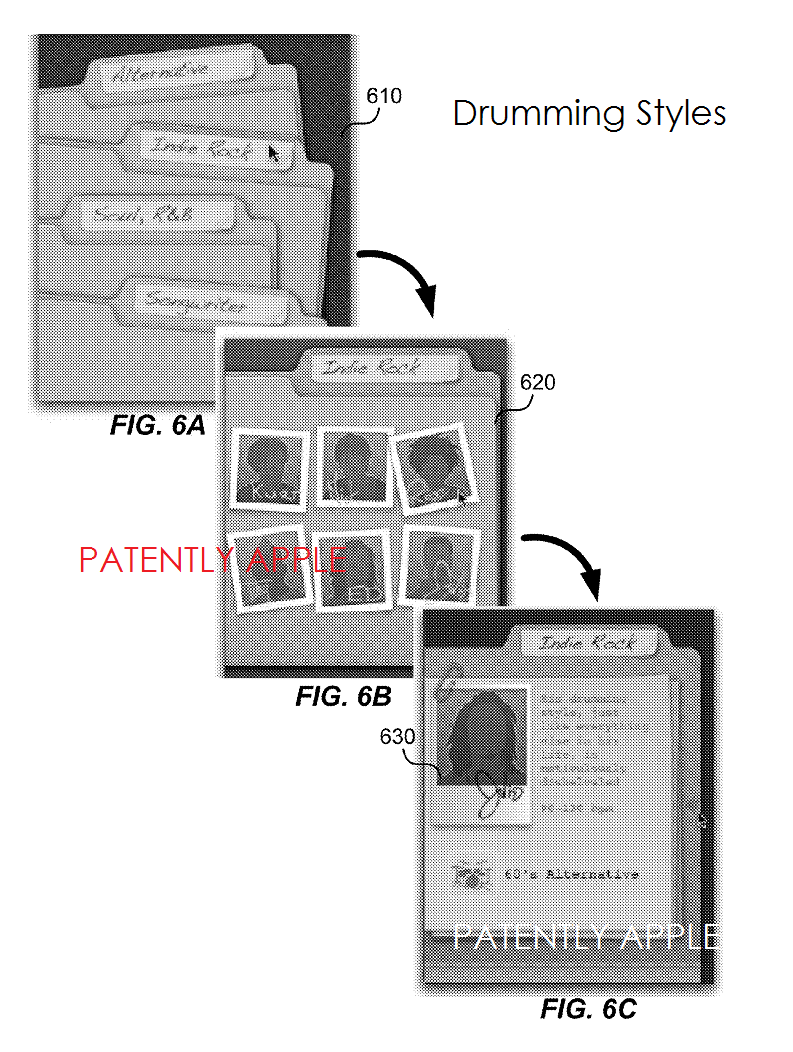 In Apple's patent FIG. 6B noted above we're able to see a file holding a number of drumming styles within the indie rock genre, according to an embodiment of the invention. Selecting "indie rock" from the number of genres depicted in FIG. 6A opens a folder featuring a plurality of selectable drum "personas," (e.g., "Kurt," "Julio," "Rose," etc.) each providing a particular musical "style" with unique stylistic nuances to the rhythmic accompaniment while still retaining stylistic elements of the base genre.

For example, "Julio" may exhibit different micro-timing and micro-dynamic characteristics than "Rose" or "Kurt," and be well-suited for a particular range of tempo, but still retain basic elements of indie rock type performances.

In Apple's patent FIG. 6C noted above we're able to see a file for particular drumming styles within the indie rock style, according to an embodiment of the invention. The drumming style personified as "Julio" is described as "60's alternative" and "disheveled." In one embodiment, this style can be a particularly sloppy drum style with fluctuating micro-timing shifts, but tastefully embellished micro-dynamics that imply the 1960's style of rock. It should be noted that any number of personalities, styles, embellishments, or the like, can be grouped or associated in any desired combination and the "personas" described herein can function as presets to affect the overall sound and style of the rhythmic accompaniment. For example, the "Julio" persona described above can provide presets for song complexity and volume as well as a small amount of swing in generated beats. These same parameters can be individually changed at will and can be simply used as starting points for achieving a desired sound or style. In some embodiments, new personas can be created and customized to taste. For example, a customized persona named "Animal" may include maximized values for volume and fills with minimized shuffle and a double bass kit piece. Any combination of configurable parameters can be combined and assigned to personal preference.