Apple Opening New Stores in China at an Accelerated Rate 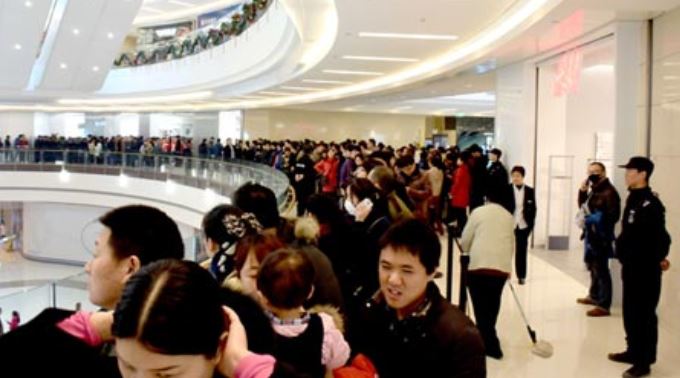 On Monday we reported that Apple had opened a new store in Henan province, its first in central China, bringing the number of Apple stores in mainland China to thirteen. The new store opened last Saturday in a shopping mall in downtown Zhengzhou. Our cover graphic shows the massive crowds that gathered to experience the first Apple Store in that region. Today it's being report from several Chinese news sites that Apple will have another four stores opening before the Chinese New Year. The Spring Festival, or the Chinese lunar New Year, falls on February 19 this year. It is regarded as the most vibrant shopping season for 1.3 billion Chinese people.

Apple's senior vice president of retail and online stores, Angela Ahrendts, told Xinhua in a telephone interview that "We are opening five new stores before the Chinese New Year this year. Four of the stores are in brand new cities for us."

The next store to open is the West Lake Apple Store in Hangzhou, Zhejiang Province, near Shanghai, is scheduled to open on January 24. In total, the new stores will bring the total number in China to 20, a great leap since the first store opened its doors in Beijing in 2008.

While Ahrendts wouldn't confirm where the other three stores will be, Apple's China website lists store job opening in 15 places, including Anhui, Guizhou, Hebei, Inner Mongolia, Shandong, Shanxi and Tianjin, none of which currently have Apple stores.

Ahrendts lastly noted that while Apple is hiring in China, the biggest challenge has been keeping up with demand while providing the same global customer service standards.

About Making Comments on our Site: Patently Apple reserves the right to post, dismiss or edit any comments. Comments are reviewed daily from 4am to 7pm PST and sporadically over the weekend. Photo Credit: Xinhau