Last week we posted a report titled "Apple Files their Tenth Smart Pen Patent of the Year." Apple's smart pen project has been one of the longest running projects at Apple. They've covered smart pens for graphics, for handwriting and forms, as part of a collaboration system, for paper and everything in between. Sony, as noted in the video above, has developed a new A4 digital notepad that is the first in the world to use E Ink Mobius, a new flexible electronic paper display (EPD) technology that was first introduced in 2013. It's super light and writing with it is oh so close to the real thing. But that's the leading issue that plagues digital pens today: the "latency" factor. If a future Apple Pen is to be a winner, then it has to deliver one that finally defeats latency.

Yesterday when talking about a possible future Apple Pen with Fortune's Phillip Elmer-DeWitt, I had stated that "If there is to be an Apple smart pen, we'll probably see it roll out with the rumored iPad Pro." In light of the question that was asked of me, that position was correct.

However, if there's a caveat to add to that reply, it would have been this: The latency issue is likely the problem that Apple wants to solve before delivering an Apple Pen. If they could truly beat that problem, they'll be able to deliver a revolutionary digital Pen.

Rummaging through a list of Pen patents alone is only half of the equation. For latency to disappear you need to invent a different type of display that has a new mesh type of design that would be able to react to a digital pen more accurately.

One company working on this very issue that could help us understand the drag of latency is Toronto's Tactual Labs. They note that "Physical objects respond instantly to the forces we apply to them. However, the digital input sensors and software in use today fail to provide the immediacy and precision of the physical world. Screen content responds 50 to 200 milliseconds after being touched. The result is a user experience that promises direct manipulation of on-screen content but under delivers. 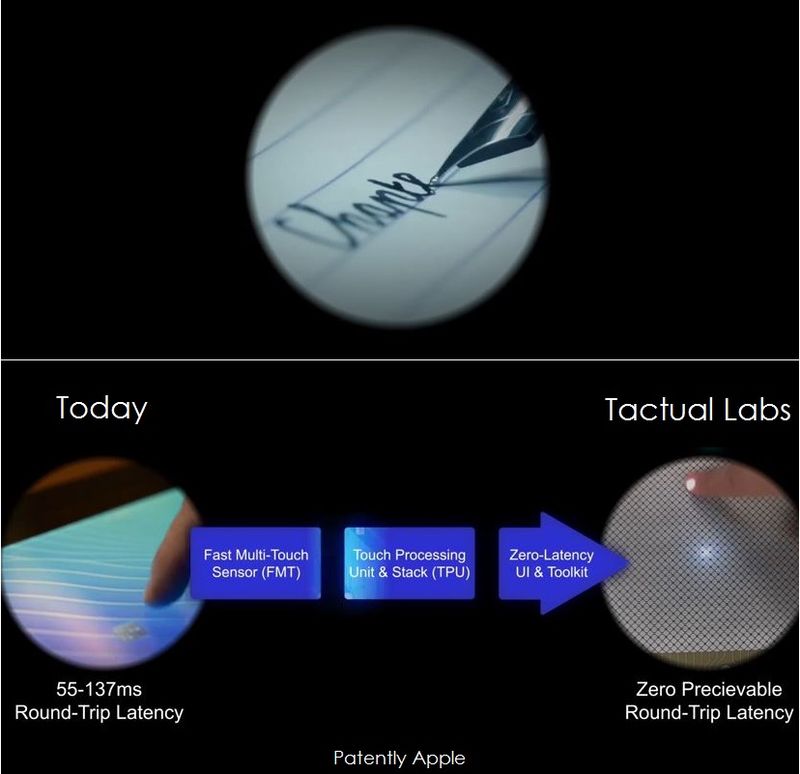 In the video noted below you'll get to see the issue that Apple has either tackled is trying to tackle before delivering a digital pen that will actually be loved by those who desire to take notes, annotate, highlight and scribble on documents like they still do today on paper based legal briefs and long documents.

Apple has tons of ideas of what they may want to achieve with a future smart pen, but I'm not sure we'll see one of them debut until they can solve the latency issue. Yes of course I'd love to see an Apple Pen debut with Apple's iPad Pro. But what we don't want is a crayon that's pretending to be an accurate pen like Samsung's. Apple has told us numerous times that they've delayed a product until they were able to deliver the right quality display or type of display and so forth. The Apple Pen is the same thing. Until they have the breakthrough needed to make a difference, we'll just have to be patient.

The good news is that companies like Tactual Labs are showing us that the solution may in fact already be here and just around the corner before it hits the market. That tells us that an Apple Pen could be timed right for the iPad Pro 2015 or 2016. For those hoping for a digital pen from Apple, it can't come soon enough.