Is the Galaxy Gear VR just another Borrowed Idea from Apple?

Today a CNN video report pointed out Samsung's Gear VR glasses. The Samsung representative, around the 40 second mark of that video, states that "We have created smartphone powered virtual reality. Transforms that flat 2D map of content that we've always had, into the rounded 3D globe content we've always dreamed of." Yet the basic hardware approach that they've taken was really first invented by Apple all the way back to 2010. So how original is Samsung's VR Glasses concept? – Not very.

Below you'll find an image from Apple's 2010 patent filing juxtaposed to two Samsung Galaxy Gear VR images. Apple showed a possible future headset using either an iPod or an iPhone to provide the video for a headset. What is Samsung's Gear VR doing? Yes, the very same thing. 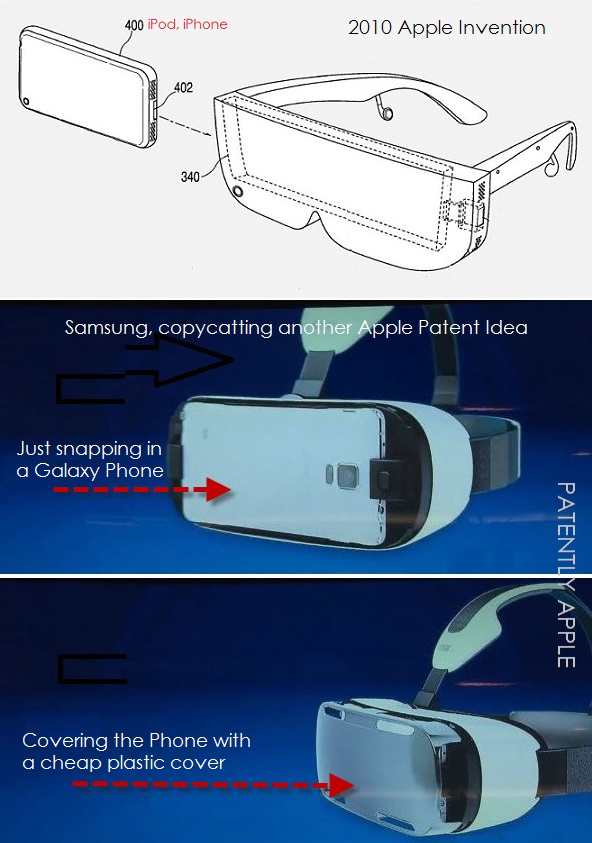 While Facebook's Oculus is still working out the bugs of their 3D headset, Apple quitely acquired a company called Primesense a year ago. PrimeSense had a proven track record with 3D as it was used in Microsoft's 3D scanner called Kinect. Their technology has also been shown to be chosen to be a part of Google's Project Tango 3D camera that will debut on a future Android smartphone.

Apple has many 3D patent-pending ideas for future user interfaces, especially this one for a headset, and the rumors have begun about a new 3D UI display. Will it lead to a new Apple 3D headset? Who knows? But one thing is for sure, Samsung's Gear VR borrows heavily from Apple's original headset patent filing.

Samsung was found guilty of infringing Apple's intellectual property, even though they jumped up and down in court recently crying that they didn't steal anything. So the idea of Samsung stealing another Apple idea really isn't that surprising for some of us to hear. In fact, it's just par for the course.