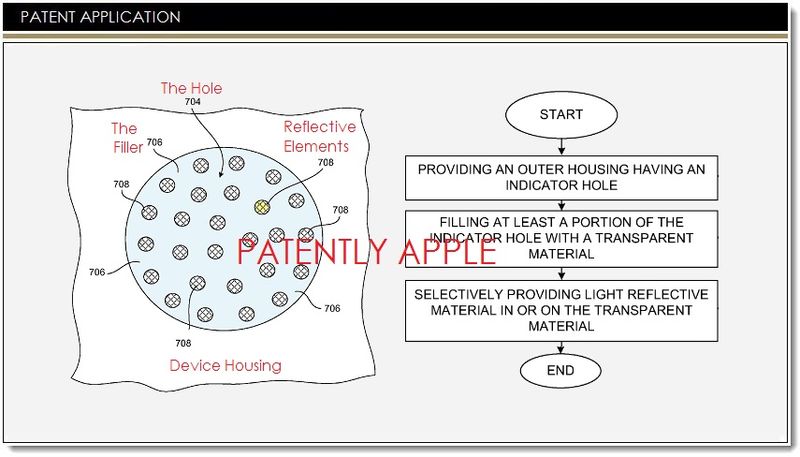 Apple's esthetic police headed by Jonathan Ive have been hard at work inventing ways to kill off device housing apertures for good. Apple has been thinking of killing off iDevice speaker grills by having sound carry through specialized cover glass. They're switching to the audio connector working with the Lightning port to kill off the standard audio jack aperture. And now Apple wants to add to their collection of aperture killing methods by having light transmissive fillers fill holes when not in use so as to appear as if they're not really there. Do you think that Apple's idea is just a little farfetched? If you do, then think again, because Apple's current wireless keyboard for the iMac already uses this invention. In a way this would make it a patent fulfilled, though Apple's invention talks about taking this idea further to other devices. After checking out my iMac's keyboard indicator light when off and on, I was rather surprised at just how well this invention really works.

Apple Invents Method of Camouflaging Apertures in iDevices and Beyond

As an electronic device, one embodiment can, for example, include at least: a housing having an outer exposed surface with at least one hole extending therethrough, the housing at least partially covering an inner region; a light source provided within the inner region and proximate to the at least one hole; a light transmissive filler provided in the hole; and light reflective material selectively provided in or on the light transmissive filler.

As a consumer electronic device, one embodiment can, for example, include at least: a housing having an outer exposed surface with at least one hole extending therethrough, the housing at least partially covering an inner region; a light source provided within the inner region and proximate to the at least one hole; a controller provided within the inner region and operatively coupled to the light source to control when the light source emits light; a polymer filler provided in the hole; and ink selectively provided in or on the polymer filler.

Apple's patent FIG. 2B noted below is a cross-sectional diagram of a portion of an iPhone (electronic device #200) in an illuminated state in which light produced by the light source #210 is projected through the hole. In patent FIG. 2C an iPhone illustrates a non-illuminated state in which a portion of incoming external ambient light is reflected by the light reflective material #218 to produce reflected ambient light #242. The reflected ambient light can provide a visual impression that the hole or aperture isn't present. In other words, when the light source is inactive, the hole is disguised whereby the user does not visually perceive the existence of the hole. 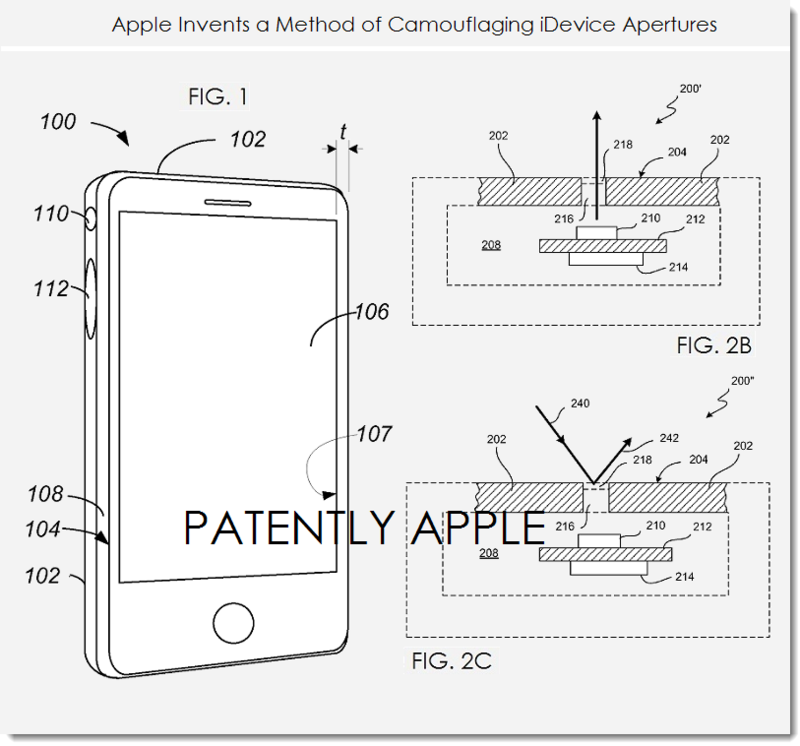 Apple's patent FIG. 3 illustrated below is a housing indication process. 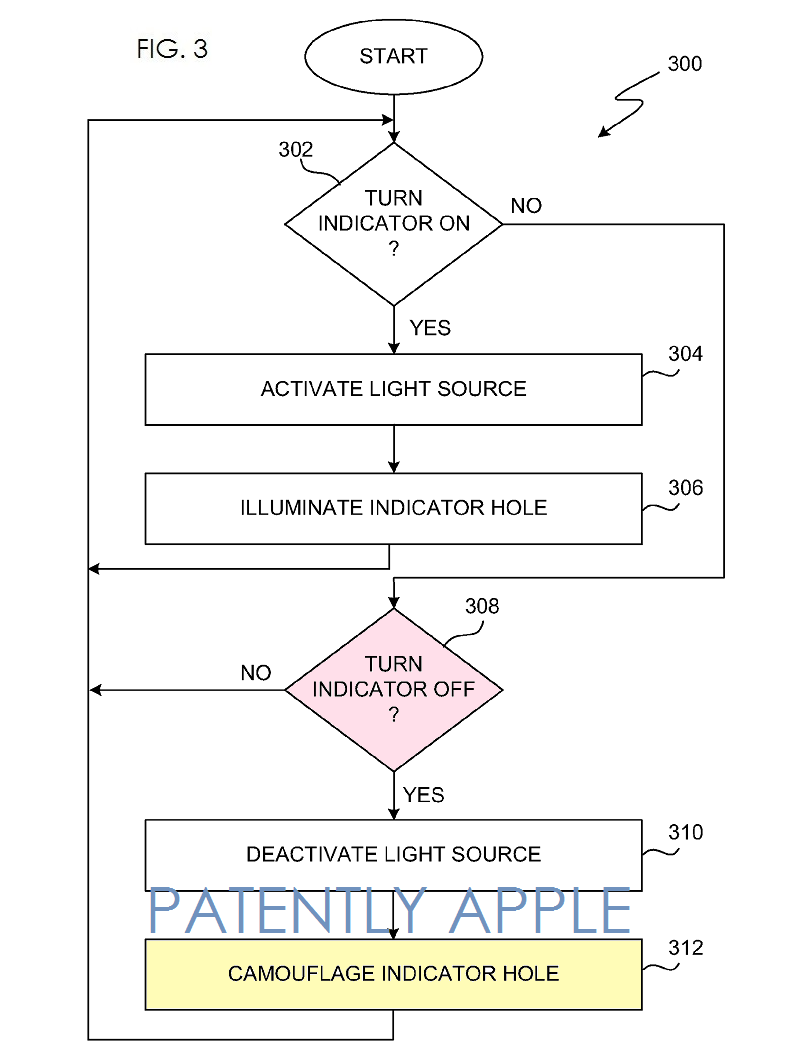 Apple notes that the reflective elements can disguise or camouflage the hole in a device as shown in patent FIG. 7 below. The number, size, shape and spacing of the reflective elements can vary widely with implementation. Through the use of inks in one or more colors and in one or more layers, there is a great deal of flexibility for the visual appearance of the hole to appear any color. Hence, the visual appearance of the hole #704 (when the light indication is inactive) can take on any desired color. 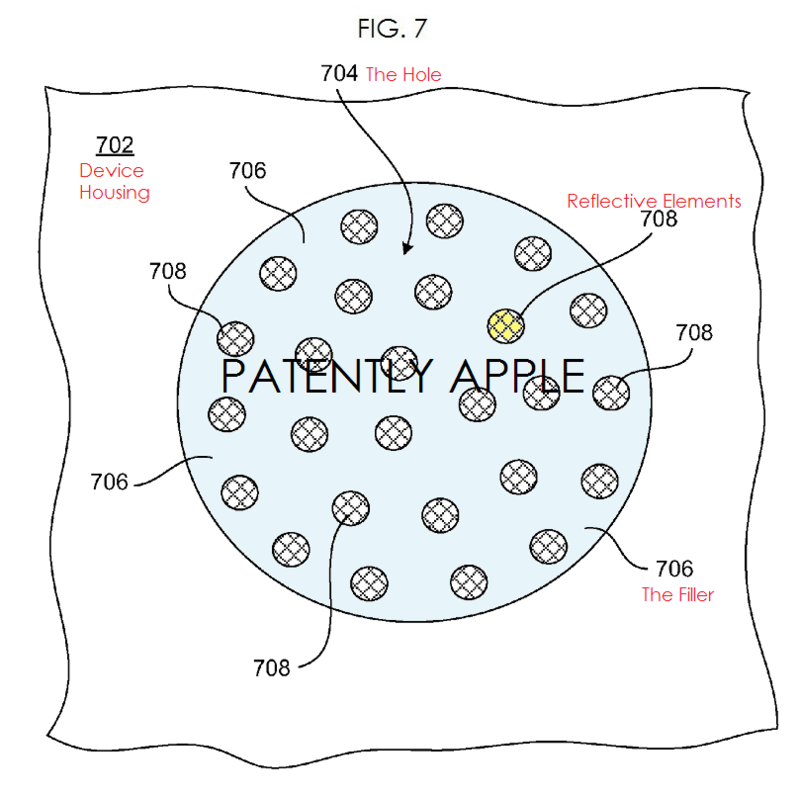 Apple lastly notes that the techniques and apparatus described in their invention may be applied to housings used by any of a variety of electronic devices including but not limited handheld electronic devices, portable electronic devices and substantially stationary electronic devices. Examples of these include any known consumer electronic device that includes a display. By way of example, and not by way of limitation, the electronic device may correspond to media players, mobile phones (e.g., cellular phones, smart phones), PDAs, remote controls, netbooks, notebooks, tablet PCs, gaming controllers, monitors, all in one computers like the iMac and the like.

Apple's patent application which was published today by the US Patent Office was originally filed on June 19, 2013. Apple credits Kroghahl, Ng and Rimple as the inventors.