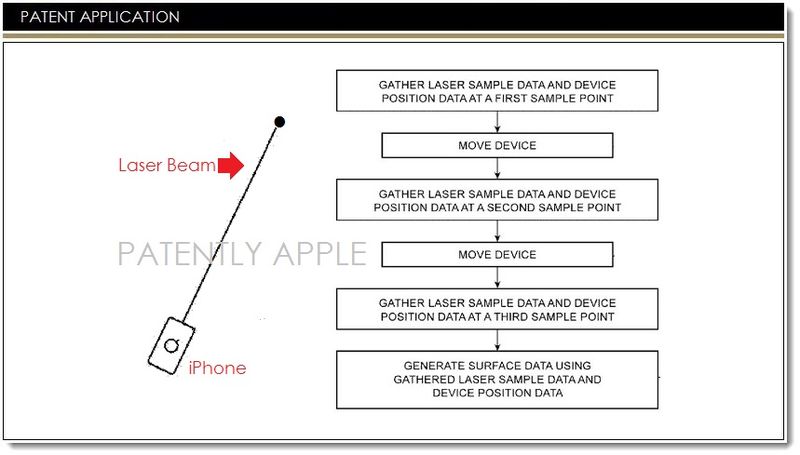 On December 4, 2014, the US Patent & Trademark Office published a patent application from Apple that reveals a unique laser beam mapping invention. A future mapping application for an iDevice like an iPhone will use a laser sensor and laser beam to gather measurements of a room that includes shapes, distances, attributes of environmental objects and volume. While Apple's patent application provides us with an overview of the technical of the invention, they never really reveal the many applications that this invention could be applied to in the future. More than likely Apple will expand upon this invention in the future so as to provide us with more insight as to how consumers will be able to take advantage of this new laser beam system for iDevices that cover everything from an iPhone, iPad and Apple Watch. While Apple is careful to not mention the word 3D, the nature of the measurements would suggest that the data collected in three axis mode would create a 3D model. It's definitely one of Apple's most interesting inventions of the year.

Laser distance measuring devices include a laser and a sensor. The laser generates a laser beam that is reflected off of surfaces such as walls in a room. By detecting the reflected beam, a device can measure the distance to the surface. This type of laser distance measuring device sometimes includes area or volume measuring capabilities. For example, in a volume measuring mode, the device may instruct a user to sequentially measure the width, length, and height of a room using the device. The device can then compute a volume using the measured width, length, and height.

Conventional laser measuring devices measure only the distance from the device to a given surface. These devices are unable to measure distances between multiple points that are separate from the device and therefore require the user to place the device is specific locations for which measurements are desired. This can be difficult in, for example, a furnished room with items that restrict access to all parts of the room.

Additionally, these devices can be bulky pieces of equipment that require batteries or battery packs and must be purchased and transported separately from other equipment and electronic devices.

It would therefore be desirable to be able to provide improved electronic devices with mapping circuitry.

As shown in the side view of FIG. 3, a laser sensor such as laser sensor #32 may be mounted on circuitry such as printed circuit within the housing of the device. When the device is in a mapping mode operation, a user may push button #43 which will activate a laser sensor to generate laser beam or may cause circuitry in the device to gather sample data such as a sample of laser data and a sample of device position data.

In general, Apple's patent FIG. 4 shown below is a diagram showing how a device may use a laser beam to gather sample data at one or more sample points on one or more surfaces from one or more positions. 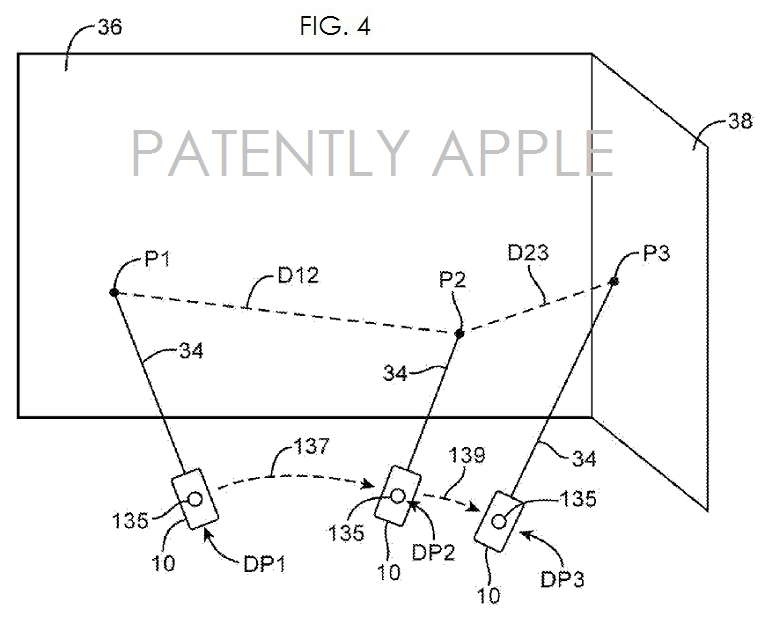 During operation in a mapping mode, the laser beam may be used to measure distances to surfaces of objects as shown in the diagram of FIG. 4 below. As shown in FIG. 4, the device may emit a laser beam in the direction of surfaces such as walls 36 and 38. For example, a user may point the laser beam at a first point such as point P1 and then press the button #43 to activate sampling of data at each sample point. However, this is merely illustrative. If desired, virtual controls such as virtual button #135 may be displayed on the device's display during mapping operations.

Apple's patent FIG. 5 noted below is a diagram showing how a device may use a laser beam to gather sample data at one or more sample points on a curved surface from one or more positions. 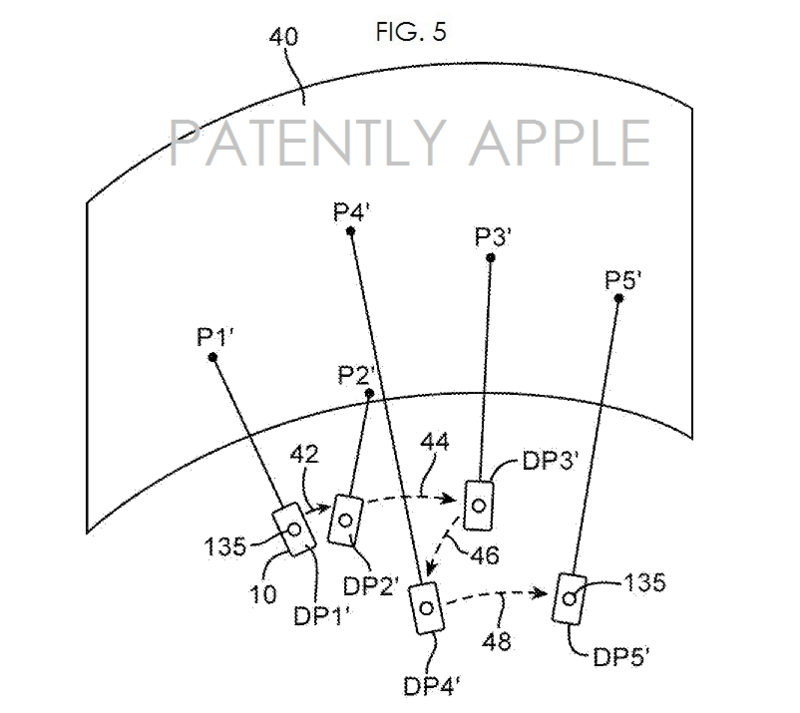 Apple's patent FIG. 6 noted below is a diagram showing how a device may use a laser beam to gather sample data for volumetric measurements from one or more positions in a room. 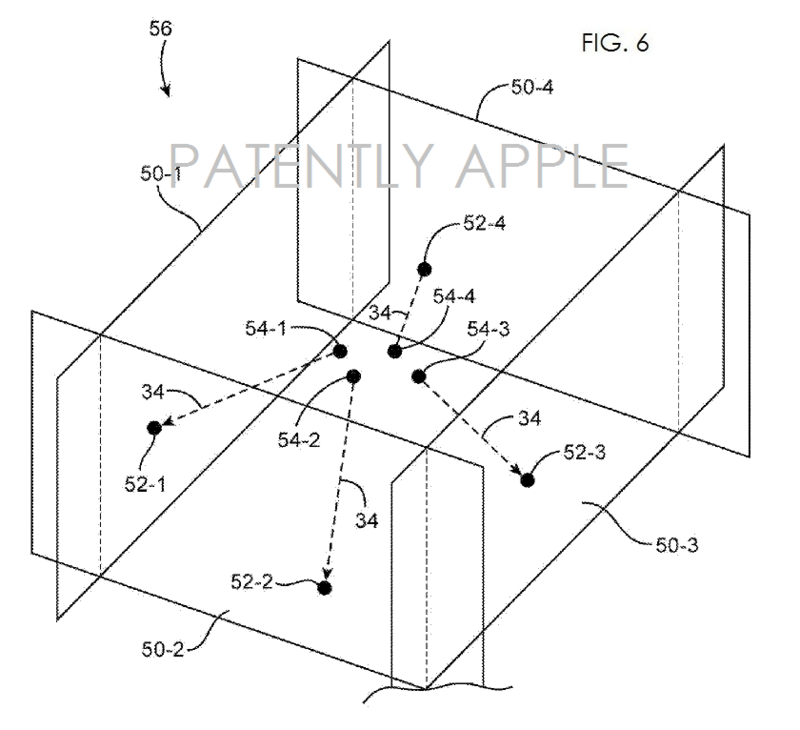 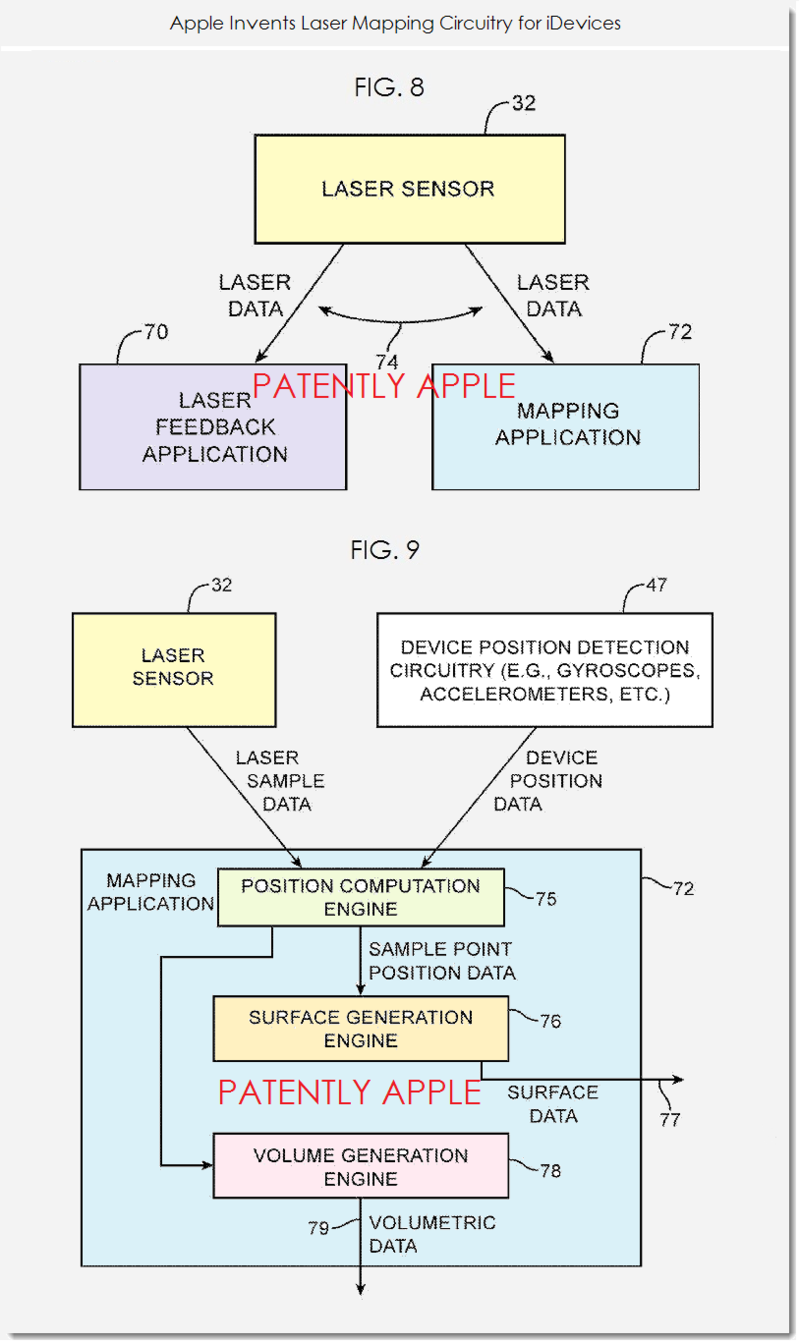 Apple credits Vivek Katiyar, Andrzej, Dhaval Shah and Stephen Lynch as the inventors of patent application 20140357316 which was originally filed in Q2 2013. Considering that this is a patent application, the timing of such a product to market is unknown at this time.

Maybe it's just me, but after reviewing the invention, "Beam me up Scotty," came to mind when thinking of its use with Apple Watch.