Apple Files their Tenth Smart Pen Patent of the Year

On December 4, 2014, the US Patent & Trademark Office published a patent application from Apple that reveals a new stylus invention relating to an advanced signal detection and demodulation architecture. For a company that supposedly has no interest in a stylus it's amazing that this year alone they've applied for ten new patents covering this type of device. It's evident that Apple has plans of introducing a next-gen smart pen at some point in the future. It's just a matter of time.

As touch sensing technology continues to improve, touch sensitive devices are increasingly being used to compose and mark-up electronic documents. In particular, styli have become popular input devices as they emulate the feel of traditional writing instruments. Most conventional styli simply include a bulky tip made of a material capable of interacting with the touch sensitive device in a manner resembling a user's finger. As a result, conventional styli lack the precision and control of traditional writing instruments.

A stylus capable of receiving stimulation and force signals and generating stylus stimulation signals that can be transmitted to the touch sensitive device can improve the precision and control of the stylus. However, in order to have stylus inputs appear smoothly on a display and integrate seamlessly with the touch and display functionality of the touch sensitive device, the stylus can be synchronized with the display and touch controllers on the device.

Apple's invention relates to a stylus signal detection and demodulation architecture that can allow for the stylus, display, and touch to be synchronized with one another.

The top patent figures below illustrate that the new stylus architecture will be able to work with touch display's covering Apple's main devices such as an iPhone, iPad and MacBook. Patent FIG. 2 illustrates a block diagram of an exemplary stylus and patent FIG. 3 illustrates a control system for a touch sensor that can detect both a user's touch and signals from a stylus. 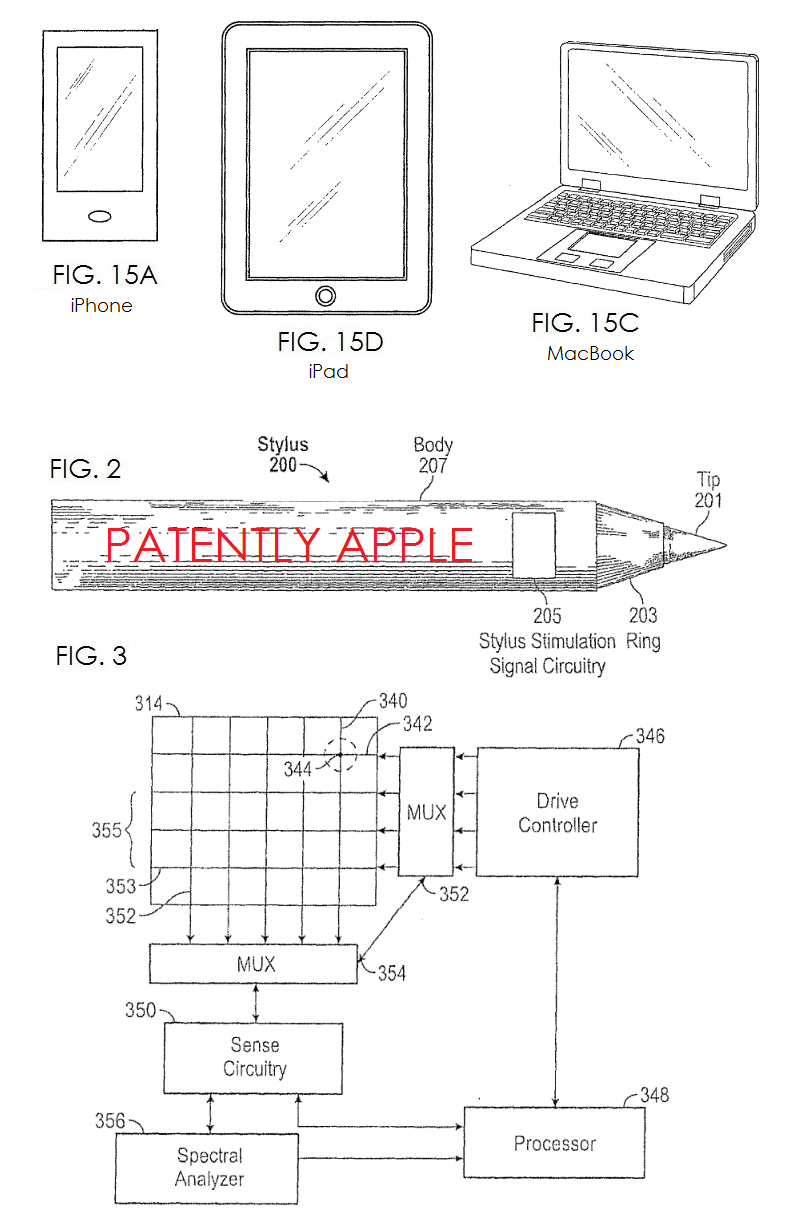 Apple credits Shahrooz Shahparnia, Christopher Mullens and Martin Grunthaner as the inventors of patent application 20140354555 which was originally filed in Q2 2013.

There's a lot of detailing to this invention and for those interested in reviewing the full application, click here. Apple has been working on a smart pen prior to the iPhone and you could review their large body of patent application here. Considering that this is a patent application, the timing of such a product to market is unknown at this time.