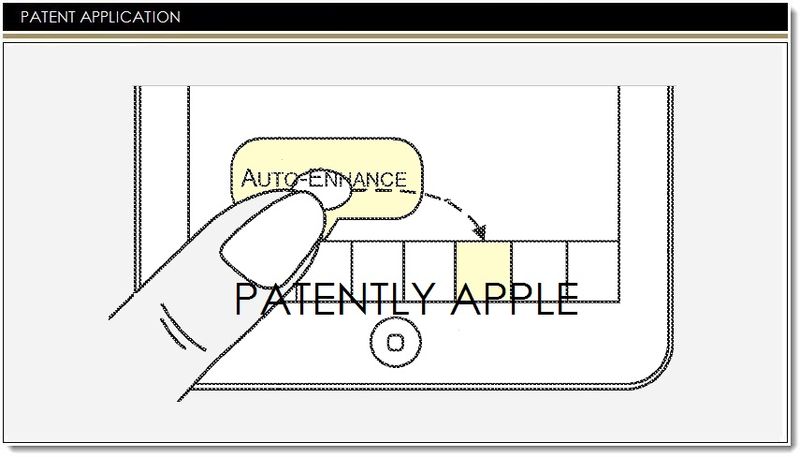 Many computing devices include a touchscreen interface that can detect physical contact from a user of the device and perform a corresponding action. For instance, some computing devices can detect when a user has provided a particular gesture (e.g., using one or more of the user's fingertips) on a touchscreen user interface, such as a single-tap, double-tap, drag, swipe, pinch, flick, rotation, multi-touch gesture, and the like. Upon receiving a gesture, such computing devices can generate an event corresponding to the gesture which may cause an application running on the device to perform a particular action.

Applications typically include a user interface with control elements that a user can select, or otherwise interact with, to cause the computing device to perform the various functions of the application. In the case of a touchscreen device, such interaction can include the user providing touch input in the form of a gesture on or near a displayed control element. In many instances, however, users may be unaware of the particular functionalities associated with some or all of the control elements displayed in the user interface of an application. Thus, in such instances, users may be unable to utilize otherwise desirable functionalities of applications running on their device.

Users can perform a "trial by error" process whereby control elements are randomly selected to determine their functionality. Such a process, however, can be quite time consuming and ineffective. In some instances, an application may be associated with a user manual that can be installed along with the application, and that includes reference information describing the functionality of the various control elements displayed in the application's user interface. Reviewing such a user manual however, can be a cumbersome process. Further, particularly in the case of a mobile device including a limited display area, reviewing a user manual for an application often involves the user manual occupying all or a portion of the device's display area. Thus, users are unable to utilize the functionalities of the underlying application while the user manual is being displayed.

Apple's invention generally relates to computing devices and more particularly to a computing device displaying content related to the functionality of control elements of a user interface within a moveable interactive element.

In a Photo Application

In Apple's patent FIG. 1 below we're able to see a user interface #102 of a photo application that includes one or more control elements #104 that may each correspond to a particular functionality of the photo application.

In various embodiments, the user interface can be displayed on a touch-sensitive interface of computing device that can both display information to a user and also receive touch input from the user such as a single-tap, double-tap, drag, swipe, pinch, flick, rotation, multi-touch gestures, and the like. Upon receiving such a gesture, the computing device can generate an event corresponding to the gesture which may cause an application running on the device (e.g., the photo application of FIG. 1) to perform a particular function.

As illustrated in Apple's patent FIG. 2 above, the initial touch input can correspond to a number of different user inputs according to various embodiments of the invention. For instance, in some embodiments, an interactive element #202 can be displayed in response to an application being executed by the computing device for the first time. In the specific example above, when the user opens their new photo app for the very first time, the computing device will display an interactive element that will provide the user with a way to learn about the functionalities of the various control elements.

In some embodiments, interactive elements can be displayed by the computing device each time an application (e.g., the photo application) is executed. In some embodiments, the initial touch input that prompts the computing device to display interactive elements can be a user-selection of a help element displayed in user interface 102 (not shown). The help elements can also be displayed in a separate user interface such as a help menu, options menu, tools menu, settings menu, etc.

Additionally, the interactive element can be manipulated by the user by moving it or dragging it to various locations in the control element bar as noted in FIG. 3 to receive further information about the element. 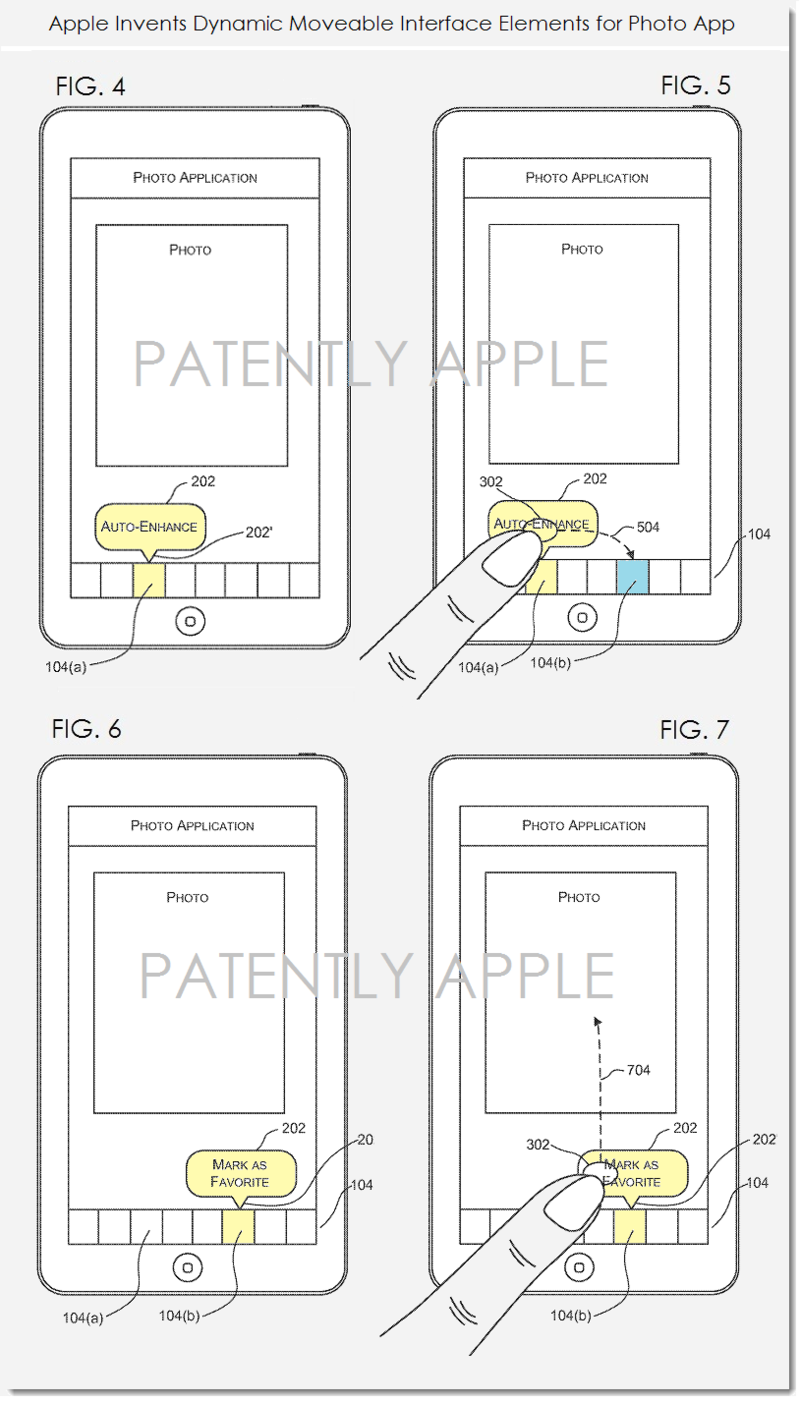 In some embodiments, other indications of the association can be provided including graphical indications (e.g., a color change, highlighting effect, shading effect, or the like of the interactive element and/or control element), audio indications, animation effects, etc. 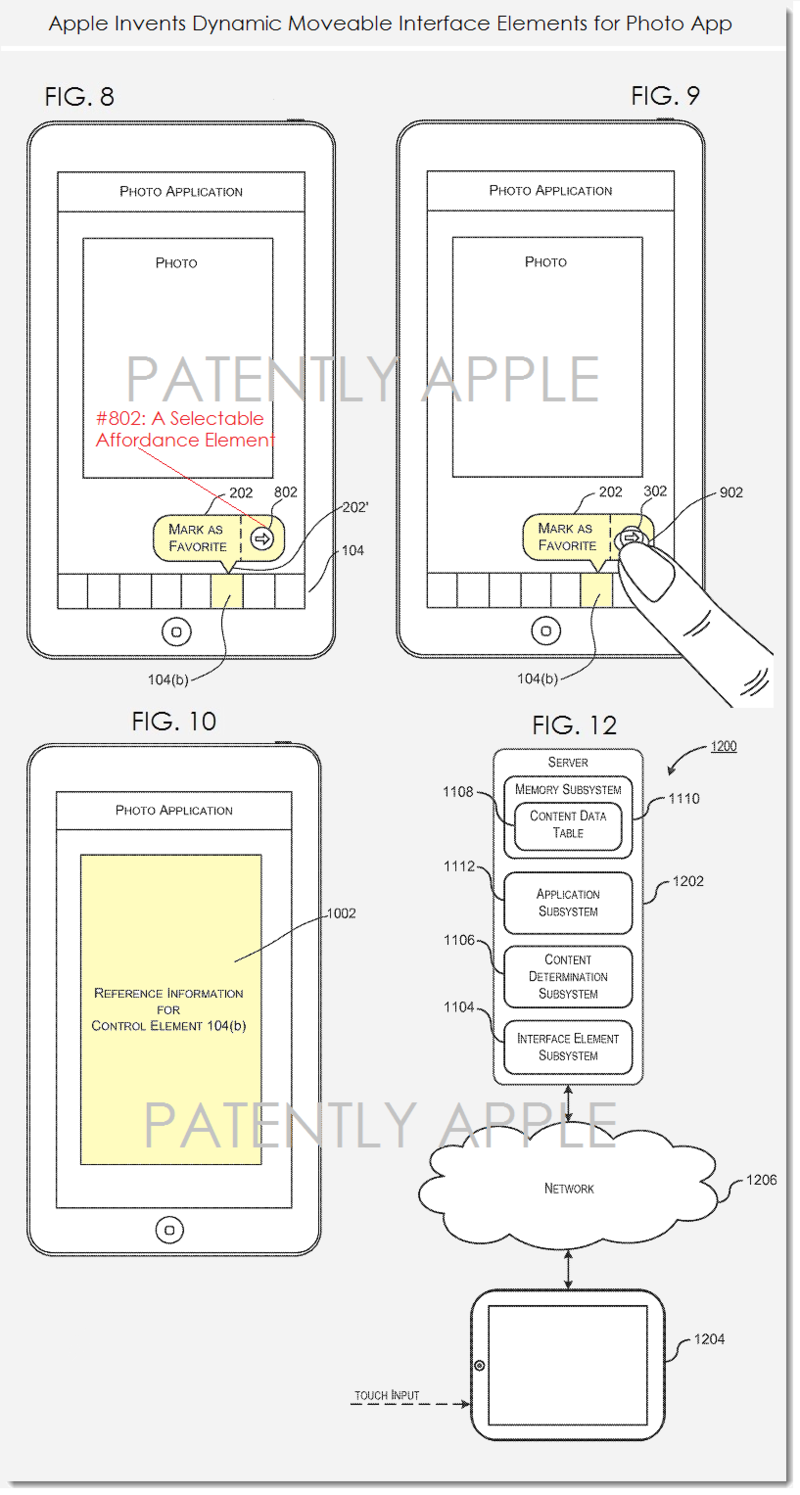 Apple credits Melissa Belisle and Frances Segal as the inventors of patent application 20140331130 which was originally filed in Q 2012. Considering that this is a patent application, the timing of such a product to market is unknown at this time.

On October 26, 2014 we posted a report titled "More Healthcare Industry Players are Thinking Apple." Going forward we stated that we would present new third party patents for medical related inventions that claim to be for iOS or OS X. This week there one worth noting:

20140328517: SYSTEM AND METHODS FOR IDENTIFICATION OF IMPLANTED MEDICAL DEVICES AND/OR DETECTION OF RETAINED SURGICAL FOREIGN OBJECTS FROM MEDICAL IMAGES