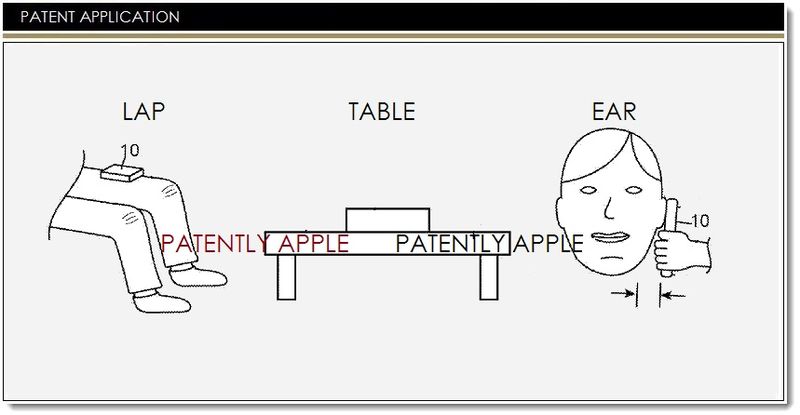 On November 6, 2014, the US Patent & Trademark Office published a patent application from Apple titled "Electronic Device with Wireless Power Control System." It's a new real-time wireless delivery system that could adjust the amount of wireless power delivered to your device depending on whether the device is near your ear, on your lap or resting on a hard surface. It's a system that abides by governmental standards when the device is near the user and yet can unleash more power when on a table. So an Apple TV, using the same iPhone or iPad Chip could be set much higher so that wireless connectivity could be vastly accelerated so that there's less time in starting a movie or other type of future TV program. It also applies to a possible future television and devices such as a MacBook.

To satisfy consumer demand for small form factor wireless devices, manufacturers are continually striving to reduce the size of components that are used in these devices while providing enhanced functionality. It is generally impractical to completely shield a user of a compact handheld device from transmitted radio-frequency signals. For example, conventional cellular telephone handsets generally emit signals in the vicinity of a user's head during telephone calls. Government regulations limit radio-frequency signal powers. In particular, so-called specific absorption rate (SAR) standards are in place to impose maximum energy absorption limits on handset manufacturers. At the same time, wireless carriers require that the handsets that are used in their networks be capable of producing certain minimum radio-frequency powers so as to ensure satisfactory operation of the handsets.

The manufacturers of electronic devices such as portable wireless devices therefore face challenges in producing devices with adequate radio-frequency signal strengths that are compliant with applicable government regulations.

It would be desirable to be able to address these challenges by providing improved wireless communications circuitry for wireless electronic devices.

An iDevice on a Table: When it is determined that the electronic device is being operated while resting on an inanimate object with a hard surface such as a wooden table, the maximum transmit power level may be set to a maximum value.

An iDevice on your Lap: When it is determined that the electronic device is resting on the body of a user, the maximum transmit power may be set to a reduced level.

In Apple's patent FIG. 5 below we're able to see that an iDevice is resting on a user's lap (#56) or leg surface (#58). The wireless transmission is reduced due to the soft and porous nature of clothing worn by the user and due to the presence of soft flesh that's typically softer and more likely to absorb high frequency sounds than the surface of a table. This behavior of the user's clothing and body may be exploited when using sensors to detect the operating environment of the device.

An iDevice near your Ear: When it is determined that the electronic device is being held near the ear of a user so that the device is offset from the user's body, the maximum transmit power level may be set to a level between the reduced level and the maximum value.

The sensor signals that are gathered by the electronic device to ascertain how the electronic device is being used may include motion signals from an accelerometer. The sensor signals may also include ultrasonic sound detected by a microphone. Device orientation data may be used by the device to select whether to measure the ultrasonic sound using a front facing or rear facing microphone. The maximum transmit power level may also be adjusted based on whether or not sound is playing through an ear speaker in the device.

Apple notes that the electronic device #10 noted above as an iDevice, could also represent other devices such as a MacBook, an iMac, an Apple TV set-top-box, a television, an Apple Watch, Apple's earphones or Beats headphones, another earpiece device, or other wearable or miniature device and more.

Apple's patent FIG. 11 noted below is a flow chart of illustrative steps involved in operating an electronic device while regulating a maximum transmitted wireless power level. 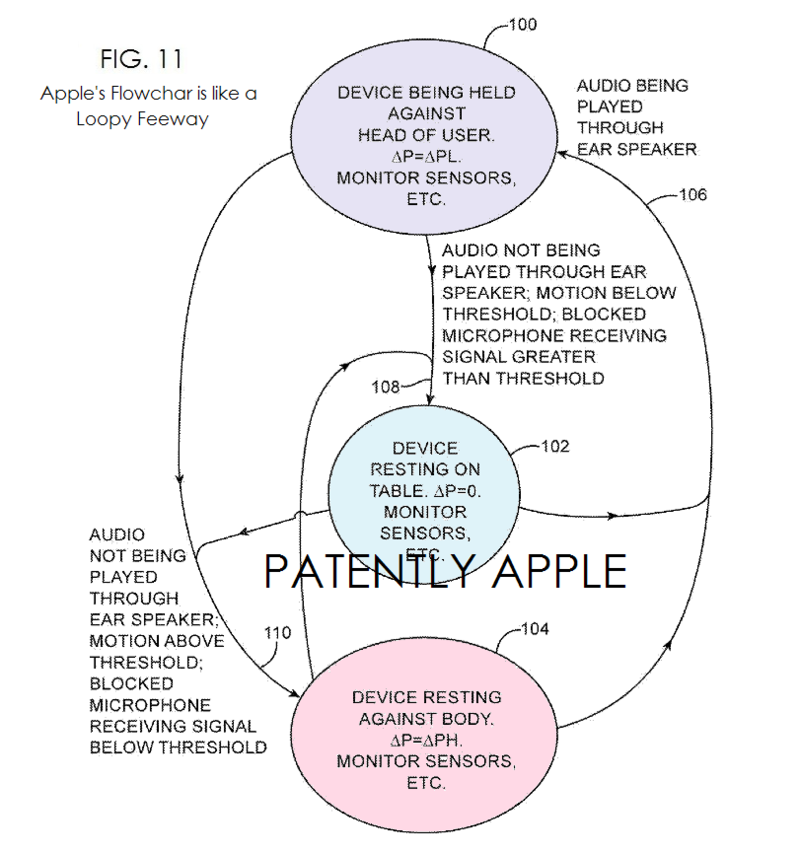 Apple credits Ruben Caballero, Michael DiVincent, Indranil Sen, Robert Schlub, Mohit Narang, Ricardo Belasco, Christopher Crowe and Scott Vernon as the inventors of patent application 20140328488 which was originally filed in Q2 2013. Considering that this is a patent application, the timing of such a product to market is unknown at this time.

Just as a point of interest, a 2006/2007 patent application noting Steve Jobs as one of the inventors is being tweaked once again in order to get it granted. The continuous patent application is # 20140327629 titled "Touch Screen Device, Method, and Graphical User Interface for Customizing Display of Content Category Icons." It's one of the original iPhone inventions. You could review it here. Apple's patent figure below covers features such as "slide to unlock," along with headset and battery status indicators. 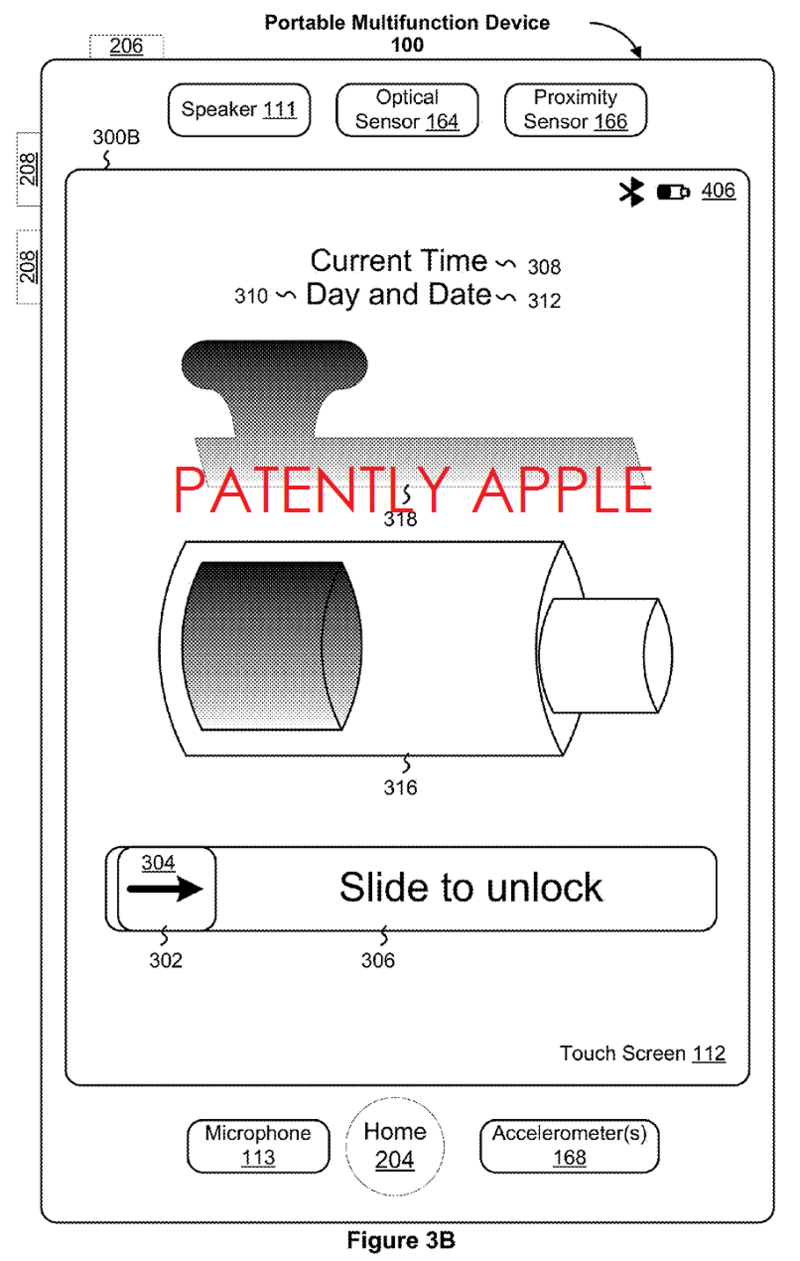