Tech Companies Continue to Work towards the Self-Driving Car

Self-driving and autonomous vehicles, in particular, are much closer to reality than most people and businesses realize, according to a new Gartner study. Over the next six years, self-aware vehicles will emerge first that are increasingly also able to autonomously sense, interpret, decide, act and communicate with other automobiles, infrastructures, businesses, people and organizations. As this self-awareness matures into the next decade, vehicles will become progressively smarter and autonomous, leading to the most fundamental change in transportation, mobility and society.

Thilo Koslowski, vice president and distinguished analyst at Gartner states that "At the core of this change is not just the accumulation of hardware, software and data communication technologies. The real impact of self-driving vehicles is the disruption of our existing personal and societal beliefs and the reorganization of established business assumptions in many industries. At the same time, self-driving vehicles will enable radically new digital business opportunities, such as personal delivery services that utilize a consumer's driverless vehicle to transport packages between two businesses."

According to a 2014 Gartner survey of over 6,000 consumers, nearly two-fifths of U.S. and German vehicle owners are interested in purchasing a fully or partially autonomous vehicle the next time they shop for a vehicle.

Gartner's report predicts that "by 2016, three companies will have announced concrete plans for upcoming automobile launches that will offer autonomous vehicle technology."

By 2025, vehicle-to-vehicle and vehicle-to-infrastructure communication will be available in approximately 30 percent of passenger vehicles in use in mature markets, which will increase the reliability and accelerate the rollout of autonomous vehicles. By 2030, autonomous-driving-capable vehicles will represent approximately 25 percent of the passenger vehicle population in use in mature markets.

At the moment it's no secret that Google is one the leading pioneers in this field. Our Patently Mobile IP blog covered one of Google's extensive patents on this subject back in 2013 in a report titled "Google Patent Reveals New Refinements for the Driverless Car." It's always fascinating to learn about such an ambitious project and its many moving parts.

Today, there are many Apple patents regarding CarPlay and where it may go in the future. A recent patent that Apple filed in Europe shows that is working on multiple interfaces for CarPlay depending on the design of infotainment system in a particular vehicle. Another patent filed in 2013 revealed Apple's In-Vehicle Holistic ID for CarPlay (then "iOS in the Car"). Another Apple patent covered driver preference-settings for CarPlay and iOS. One of the patent figures is noted below. 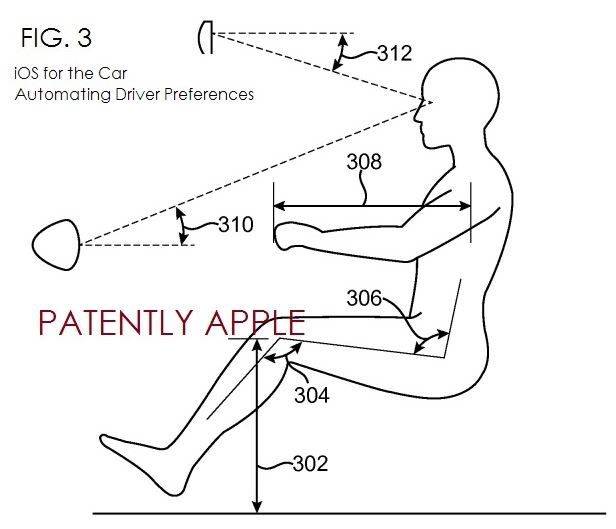 We recently noticed that this is an area that Ford, through their Ford Global Technologies company, is trying to patent for future cars and notes iOS. One patent is called Seat-Integrated Occupant Presence Detector and another is titled "Occupant Presence Detection and Identification." Both are very interesting inventions talking about how a camera builti-into the dashboard will be able to recognize if you're in fact the driver before allowing the vehicle to even start. Once verified, the individual driver preferences for car seat, mirrors and a host of in-vehicle features kick into action.

Other Ford patent applications that are related to automated systems include park assist and advanced park assist that will work iOS.

In September a GM Patent application came to light about an interface from the car communicating with a future iPhone and/or iPad.

The topic of self-driving and autonomous vehicles was once limited to science fiction movies and now we're seeing that most of us reading this article today are likely to see this become a reality to a certain degree.

Of course, as the Gartner report acknowledges, autonomous and driverless vehicles still have many obstacles to overcome before they meet all consumer, industry and legal requirements. Yet despite such challenges, the societal benefits from autonomous vehicles could outweigh potential disadvantages and concerns.

Over the next decade or two, car and tech companies like Apple, Google, Microsoft and others will be working hard to drive the evolution of automated vehicle services for future cars that will eventually get us to our final destination of self-driving and autonomous vehicles.

Although it'll never be appealing for those who really love to drive and race cars, it'll have its place. For simple inter-city commutes, drives to the country cabin, or being in a new city for the first time anywhere in the world, the automated cab-like experience will be a winner. Automated "tourist drives" for individuals instead of having to rely on bus tours will be really enjoyable.

While being driven to work, some will be able to get deadline work done before getting to work. Some will catch-up on emails or simply watch local or international news on their future iPhone-TV service. Where all of this automation could be leading is rather exciting for those of us who enjoy technology of every stripe.

Yet before we get there, especially self-driving cars, they'll be a lot advances that will need to take place including the creation of new interconnected inter-city infrastructural changes to assist self-driving cars safely run around town.

While it's highly unlikely that Apple will be a major player in this area of technology out of the starting gate like Google is today, we could never count Apple out in the long term. Yet in the shorter term, car companies are working on automated systems of every kind and Apple is indeed working on various aspects or pieces of the automated puzzle for CarPlay and perhaps far beyond. While it's going to be a long journey, we'll continue to cover inventions on this front from Apple and others to help us see what could be coming around a future corner.

What are your thoughts on the future of self-driving and autonomous vehicles? Send in your comments below.