Samsung Headed for another Ugly Quarter as Profits Plunge

It could get ugly for Samsung this week: We posted a report on September 24 titled "Samsung Rushes their Galaxy Note 4 to Market as their Stock Price Plunges after Apple's iPhone Sales are Realized." Now a new report is stating that Samsung is heading for its roughest quarter in years amid rising competition from Apple and China's Xiaomi. Claire Kim, a Seoul-based analyst at Daishin Securities Co., said by phone that "We all know Samsung's third-quarter earnings will be pretty ugly."

The report notes that "Analysts have been cutting their profit estimates almost daily, with at least 26 of 42 tracked by Bloomberg reducing their estimates in the past four weeks. Operating profit for the third quarter is projected to plunge 47 percent, while sales are projected to fall 15 percent, according to the average analyst estimates. Both are the steepest declines since at least 2009 with Samsung to announce results" today.

The report further noted that "Samsung and Apple could face stiffer competition in the world's largest market as China Mobile takes steps to eliminate $2 billion in smartphone subsidies, almost doubling the costs of some high-end devices for consumers." In 2013 Samsung admitted that without their higher subsidies their global business would seriously suffer. While that could affect Apple to a certain degree as well, the fact remains that sales of the iPhone 6 in China at the moment are on fire – which is bound to contribute to Samsung's ongoing slump for some time to come as their leading phablet takes back seat to Apple's new iPhone 6 Plus. 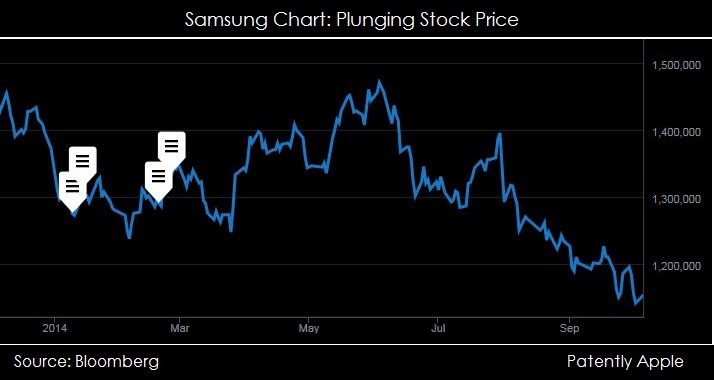