Apple slowly gaining ground in India: Today an Indian publication's headline reads "Apple's India revenue jumps 10-fold in just four years." Apple sold 1 million iPhones between October 2013 and August 2014. As the momentum grows, India's first allotment of the iPhone 6 was sold out in a record 72 hours, a first for India. 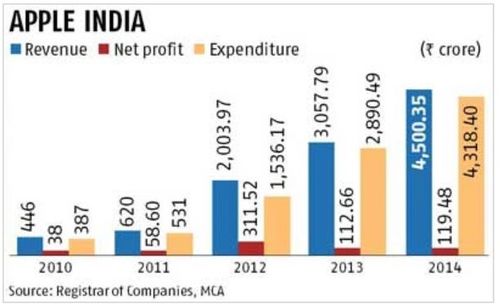 Although the news reported on today by India's Business Standard is positive, in context, Apple's market share in India is well below that of Samsung, Micromax and Karbonn. Then again, as far as premium phones go, we reported back in July that Apple outsold Samsung 2 to 1 in India. This class of iPhone customer in India have a saying: you flaunt an iPhone; you don't flaunt an Android.

Apple is focusing more on India. The iPhone 4 took 337 days to land in India whereas the iPhone 6 only took 28 days.