On October 16, 2014, the US Patent & Trademark Office published a patent application from Apple that reveals a pop-up menu system for iDevices using pro apps like Apple's Numbers or Pages or Microsoft's Excel or Word that could be customized by the user. The interface will also be able to be used on a future iPad Plus or iPad Pro (whatever they brand it) using a physical keyboard accessory.

In certain productivity applications, a user may be prompted to provide inputs or otherwise fill in content of a cell or series of cells within a table. For example, in a spreadsheet application or other application where a table is provided, certain of the cells may be used to display user selected or input content. In some instances, it may be appropriate for a range of cells, such as a row or column, to contain values selected from a known or limited set of values. That is, the value for a given cell may correspond to a value from a known set or list of possible values. Implementation of a user-friendly approach for helping a user populate such cells, particularly in the context of a portable or handheld device where the input control structures are limited, may be difficult.

Apple's invention generally relates to the use of a pop-up menu interface for iOS with cells of a table.

Apple's patent illustrations noted below show you the generation and use of pop-up menus for populating cells of a table. In certain embodiments, the cells and table are displayed as part of a productivity application (such as a spreadsheet application) running on a portable or handheld device having a limited range of input structures, such as only having a touch screen or a touchscreen and one or two function buttons.

In addition, automatic reformatting (such as to identifiable text, date, time, or numeric formats) of the cells contents may be performed as part of the pop-up menu generation.

A user may also perform manual editing of the generated pop-up menu, with the corresponding values in the selected cells subsequently being reformatted or altered based on the automated reformatting or user provided edits applied to the pop-up menu options. Otherwise, however, the contents of the cells used to generate the pop-up menu list of options are left unchanged as long as that value is present in the associated pop-up menu.

Apple's patent FIG. 2 noted below is a perspective view of an iPad; FIG. 4 depicts a screenshot of a formatting interface. 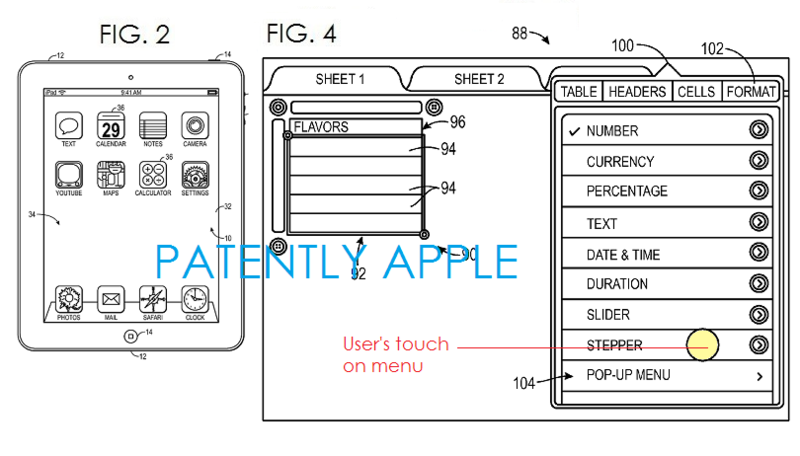 Apple's patent FIG. 6 noted below depicts a screenshot of an operation whereby a pop-up menu list option is entered or edited by an iDevice user. 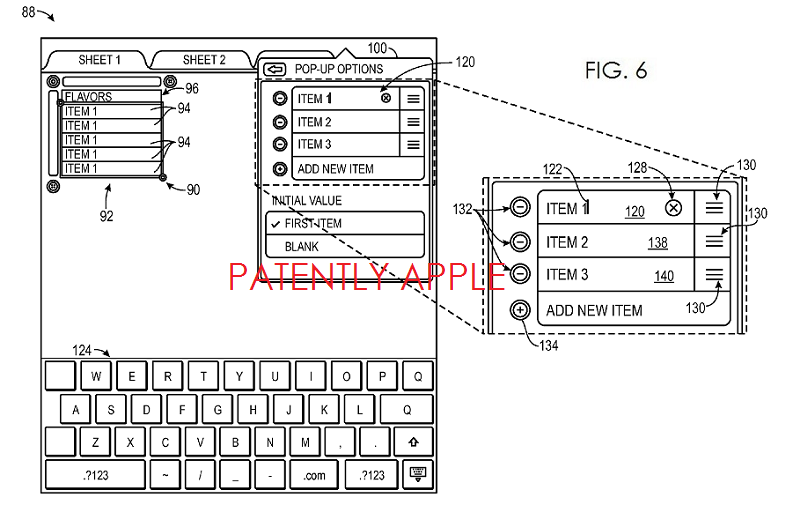 Apple credits mark Bernstein, Matthew Lehrian, Ryan Olshavsky, Yik Yip, Christopher Weeldreyer and Jane Chronis as the inventors of patent application 20140310649 which was originally filed in Q3 2013. Considering that this is a patent application, the timing of such a product to market is unknown at this time.