In July the UK based TechRadar gave Samsung's new Galaxy Tab S a great review, 4.5 stars out of 5. Yet despite that great review, the new Samsung tablet couldn't generate more tablet usage in the UK. In fact, according to a new UK tablet web traffic study by Chitika, Samsung's tablet usage rate actually fell from 9.1% in April to 8.8% in August. Overall, Apple's iPad was the web-traffic champ again crushing both Android and Windows tablets combined in the UK market.

In July, Apple was the landslide winner in the US and Canada with 78% of tablet usage and in the UK for August Apple took close to 75%. All Android Tablets combined could only muster 23.9%. What are these tablets used for – serving trays?

Think of Microsoft's latest big Surface 3 push in the market and it was only able to garner 1.1% of web traffic in the UK. It was noted in July that the UK usage stats for the iPhone in the UK was 50% and so the iPad stats are even more impressive.

Chitika's latest study notes that "Similar to the North American ecosystem, Apple iPad users generate the lion's share of tablet-based Web traffic within the UK. Additionally, Samsung, Amazon, and Google users represent the next-largest UK tablet traffic segments, albeit in a slightly different order than what is observed in the U.S. and Canada.

Apple's iPad users still generate a significant majority of UK tablet Web traffic at 74.8%. That figure is more than eight times higher than that of second-place Samsung at 8.8%, with the Korean device maker seeing its share dip 0.2 percentage points since April 2014. " 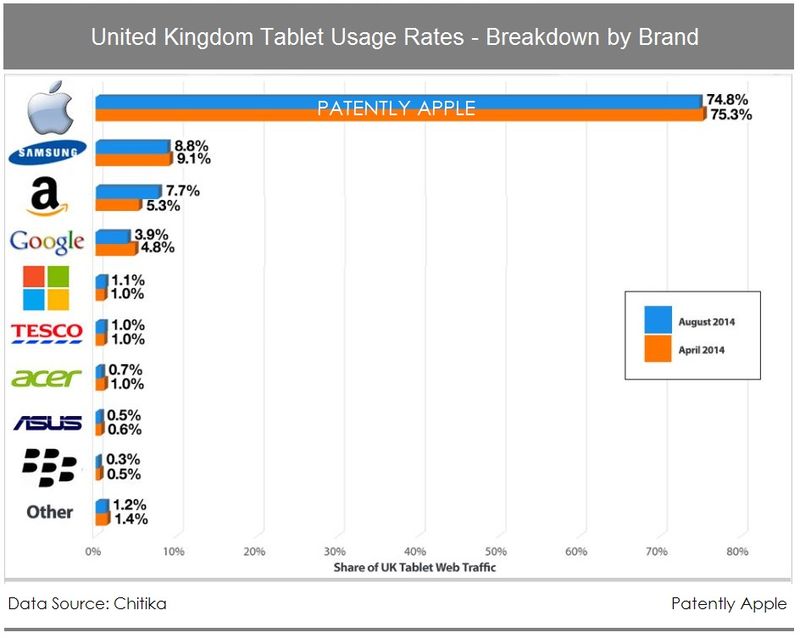 Despite Apple's slight drop in iPad sales last quarter, Apple's CEO promises that significant innovation is coming to future iPads. Yet for now, it's abundantly clear that Apple's iPad users in the UK are the most active on the internet and likely the most productive users as well.