Home Archives Contact Us Subscribe Twitter Facebook Patently Mobile
Samsung Learns that Smartphones with Biometric Sensors have to be labelled as Medical Devices & Drops the new Sensor
A Stunner: A New Patent Surfaces Listing Steve Jobs as the Primary Inventor of a Non-Apple Invention 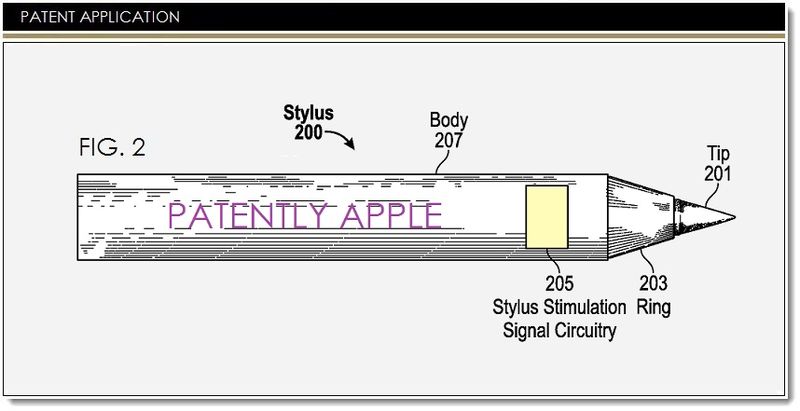 On September 18, 2014, the US Patent & Trademark Office published a series of three patent applications from Apple that reveal their ongoing work on developing a future advanced stylus. For the record, Apple now has 30 patent applications on advancing a stylus on record.

About fifteen months ago Apple's CEO told Walt Mossberg that there was no need for a watch because of the iPhone. Earlier this month Apple provided us with a peek at the coming Apple Watch. Two years ago Phil Schiller stated that there was no need for NFC and yet we now know that Apple's new 'Apple Pay" will indeed use NFC as Eddy Cue's keynote slide made that crystal clear.

When introducing the iPhone, Steve Jobs was promoting multitouch that would take the market by storm. The old world's use of a dead plastic stick known as the stylus was no longer needed for simple operation of a PDA user interface. Yet a future stylus used as an iPen or an "Apple Pen" for writing and marking up documents is a totally different matter.

Apple has been working on this since 2008. If Steve Jobs didn't believe in a future stylus for writing, then why continually fund this research? Our Smart Pen Archives proves that this has been an ongoing project at Apple with various teams of engineers working on this over time. To date Apple has 30 smart pen related inventions on record.

Albert Einstein's definition of insanity: doing the same thing over and over again and expecting different results. So in the end, either Apple is trying to perfect and deliver an advanced stylus for taking notes and marking up documents or they've lost their minds. Which do you think it is?

Apple Continues to Work on an Advanced Stylus Device

Apple notes that as touch sensing technology continues to improve, touch sensitive devices are increasingly being used to compose and mark-up electronic documents.

In particular, styli have become popular input devices as they emulate the feel of traditional writing instruments. Most conventional styli simply include a bulky tip made of a material capable of interacting with the touch sensitive device in a manner resembling a user's finger. As a result, conventional styli lack the precision and control of traditional writing instruments.

Apple's invention is a solution to this problem. Apple provides a stylus signal detection and demodulation architecture that can facilitate synchronous demodulation on a touch input device.

In one example, a plurality of stylus detectors can detect incoming stylus signals. An arbiter can determine the probable location of the stylus and can then direct the appropriate demodulation channels based on the detected position to a stylus controller that can synchronize the stylus frames as well as extract data contained within the stylus signal.

Apple's patent FIG. 2 noted above illustrates a block diagram of an exemplary stylus #200 that can be used with a touch sensitive device, such as a mobile phone, touchpad, portable or desktop computer, or the like.

Today, Samsung and especially Microsoft, offer their customers in business, medical and legal fields and students with the ability to use a modern stylus. Now with Apple partnering with IBM, perhaps there's a little more incentive for Apple to finally bring their advanced stylus to market.