Generally speaking, Apple notes that with the advent of small mobile multipurpose devices there's a need for a high-resolution small form factor camera. Yet due to limitations of conventional camera technology, conventional small cameras used in today's modern mobile devices usually capture images at lower resolutions and/or with lower image quality than can be achieved with larger, higher quality cameras.

Note that conventional small cameras use planar photosensors, and the image plane formed by the lens system at the photosensor of such cameras follows conventional f*tan(.theta.) image height law. Achieving higher resolution with small package size cameras requires use of a photosensor with very small pixel size (e.g., <1.2 microns) and a very good imaging lens system. However, achievable resolution using conventional lens systems for small cameras has not been sufficient for such small pixels due to factors such as the z-height constraint, limitations on achievable F/number, and manufacturing constraints.

Apple's solution to this problem is their invention that is out to provide a high-resolution camera in a small package size. Specifically, Apple has invented a camera that includes a spherically curved photosensor along with a new lens system. 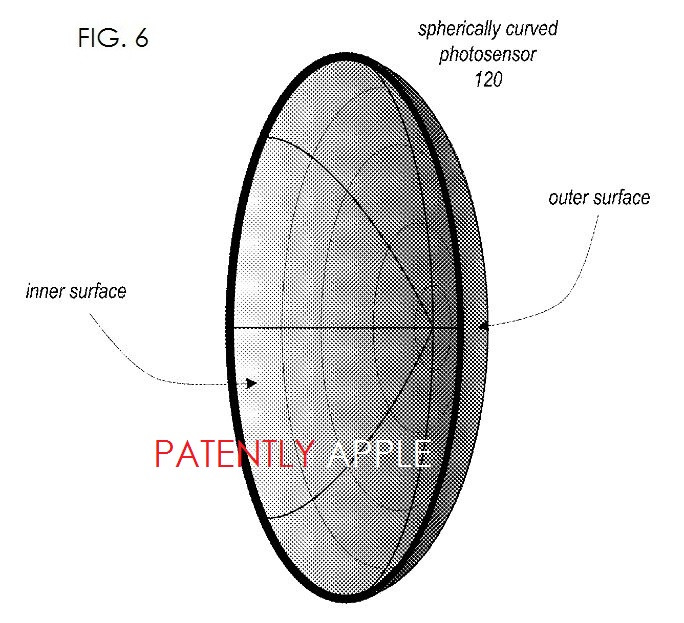 Apple's patent FIG. 6 shows us a three-dimensional oblique view of an example spherically curved photosensor #120. Note that the photosensor in this example is shaped like a slice off a hollow sphere. An array of light-capturing pixel elements is located on the inner surface. The outer surface may include connectors, pins, and/or other components for coupling the photosensor to other components within a device such as busses or other ICs.

While the new camera will work with future iDevices, it may also be incorporated into Macs, a future television, Apple TV and no doubt future wearables like a second generation Apple Watch.

One additional twist to this camera lens is that it could be a part of future "projection applications." Whether that's referencing a future pico-like system is unknown at this time.

Apple Invents a Method to Speed up Your Battery Recharging Time

Apple's invention provides the solution to this problem that could one day lead to speedier recharging of your iDevices and MacBooks. More all of the geeky details, see patent application 20140253051 here.

Most of Apple's liquid metal related patents are complicated and rarely ever provide us with a clear indication of the exact product that the new material will be aimed at or the true benefits that it could one day provide.

For all we know Apple is already using this mystery material and just refuses to publicize that information for competitive reasons.

For those of you that want to check out Apple's latest work on this material, review patent application 20140251568 titled "Methods of Melting and Introducing Amorphous Alloy Feedstock for Casting for Processing."