The report further notes that "after China Mobile said it will cut subsidies by $2 billion, its competitors will lower payments by $1.9 billion, according to analysts' estimates. China Telecom Corp. said yesterday it will cut spending without giving a figure. All three carriers rose in Hong Kong trading.

The reductions come as Apple is said to be preparing a bigger-screen iPhone and Samsung plans to bring out its Note 4, high-end devices that historically would have been subsidized by as much as $700. Both need a lift in the largest smartphone market, where Samsung lost the top spot in share last quarter and Apple failed to crack the top five in sales."

It boils down to this: "the cuts mean Chinese consumers used to paying about $100 for a new iPhone through their carrier may have to spend as much as $800." It would be tough for consumers anywhere in the industrialized world to spend $800 for one smartphone at Christmas, let alone the Asian market where wages are vastly lower. Subsidization was the only way for the masses to buy a high-end iPhone.

The report noted that "The State-owned Assets Supervision and Administration Commission told carriers to cut costs by 40 billion yuan in three years because they overspent on subsidies and advertising, people familiar with the matter said last month." Yet it appears that many, especially China Mobile, want to cut the subsidies now instead of three years down the road. Such a drastic shift would have to affect Apple's bottom line unless they decided to step in and do the financing themselves. Although that's unlikely in the short run, you can't rule that out if Apple wants to continue to cater to higher end of the market.

Local smartphone companies see this as a way to end Apple and Samsung's dominance in the market. The drastic cut to subsidies will force Chinese consumers to shop for lower priced smartphones where Apple doesn't compete in as shown in one of IDC's latest charts below. Only 18% of Apple's sales are from the middle market with the remaining 82% at the high-end. Apple doesn't compete for the lower end of the market. 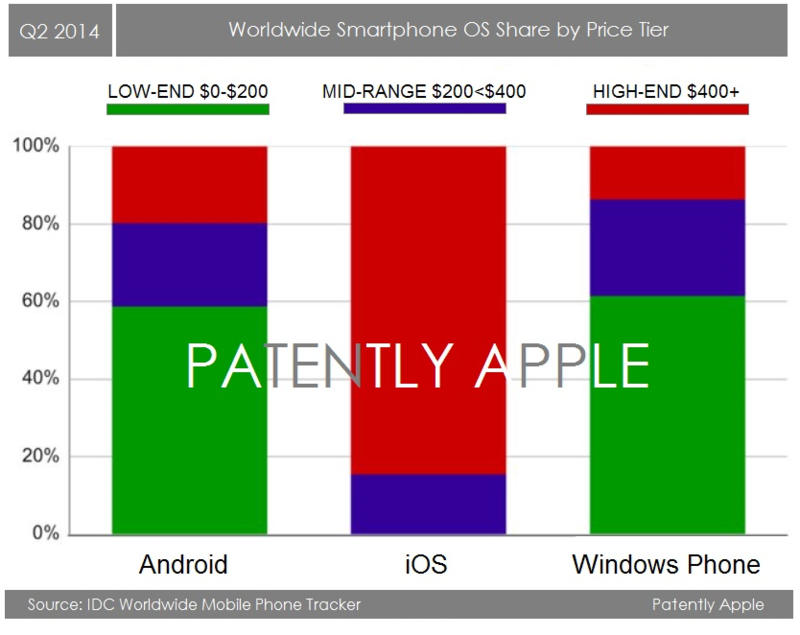 The Bloomberg report concludes by quoting Ydia Bi, a Shanghai-based analyst at Canalys who stated that "Samsung's products are gradually losing traction due to its inability to distinguish its products from other Android phones. Rising local competition and carriers' cutbacks on subsidies are only going to dampen its situation. To a lesser extent, Apple's products share similar problems."

Perhaps cooler heads will prevail and the rate of subsidy cuts will be phased in as originally announced so as to allow all of the players involved sufficient time to restructure their business models, price points and financial plans so as to not disrupt the market.

Apple is richer than most banks and small countries and so we can never rule out Apple introducing their own financing plans that are similar to those that consumers are used to today. Though that's not going to happen overnight.

At the end of the day, it's a real issue. Yet how Apple intends to handle this in the coming months or years ahead is unknown at this time. However, if the subsidy issue goes into high gear quicker than anticipated, we can be sure that Apple will act quickly and decisively to address any concerns that the market has on this front. For now, it's a lot of loud noise and saber rattling that might just be a negotiations tactic in gaining a better deal for selling Apple's iPhone 6 and beyond.