In April we posted a report titled "Could Apple be Eying Smart Clothing as the Next Big Thing?." In that report we discussed Apple's new fashion world star power now on hand and wondered aloud if Apple could be eyeing the smart clothing market as one of the next big things. We also covered clothing like pants that could use a future glass fiber material capable of recharging your device when it's sitting in your pocket. Today, Ralf Lauren launched a new line of sports shirts that contain a series of biometric sensors that will work with an iPhone. The technology behind the new shirts is from a Canadian Company by the name of OMsignal as seen in the video above.

Ralph Lauren's new line of tech shirts will only be available in the Spring of 2015 as noted in the CNBC video interview below. They're releasing news of it now to get ahead of anything Apple will be doing on this front in the coming weeks with their Health App for iOS 8 and possibly a wearable device supporting it.

It was hinted in the video that the next thing could be more smart accessories for the Ralph Lauren line. David Lauren, Senior Vice President of Advertising, Marketing and Public Relations and Ralph Lauren's son also noted that they will be opening a premium store on Fifth Avenue where Apple is today and where Microsoft is dreaming of opening a store in 2015.

At this year's U.S. Open, the tennis-watching world will be getting its first glimpse of the Polo Tech smart shirt by Ralph Lauren.  Ralph Lauren, will reportedly be outfitting a team of ball boys with sheer black shirts with conductive fibres meant to monitor their  heart rate, breathing and stress levels and then send that information wirelessly to an iPhone or other smart device.

Ralph Lauren's press release further informs us that the "Polo Tech shirt features sensors knitted into the core of the product to read biological and physiological information. With Ralph Lauren’s leadership in the design community, the compression shirt also has a sleek look in black with a signature yellow Polo Player logo. The second-skin fit enhances comfort and agility.

David Lauren, added hat "Ralph Lauren continues to be at the cutting edge of fashion and culture. Our goal is to create and reflect the ultimate lifestyle, and we believe that a healthy and active life is an essential part of that. Ralph Lauren is excited to help lead the industry in wearable technology in this ever-evolving, modern world."

David Brewer, US Open Tournament Director, said there are features in the Polo Tech shirt that can "revolutionize how players train and compete."

Beyond serving elite athletes, David Lauren also sees a place for the Polo Tech shirt in everyday life. "Our vision is that this will transcend sports to help us at every age and in every aspect of life. Reaching far beyond just the needs of elite athletes, Polo Tech will offer innovative technology for all ages and lifestyles to promote general wellness and quality of life."

The graphics below from OMsignal show that the shirts will work with Apple's iPhone. In fact at OMsignal, all of their marketing is in context with an iPhone. 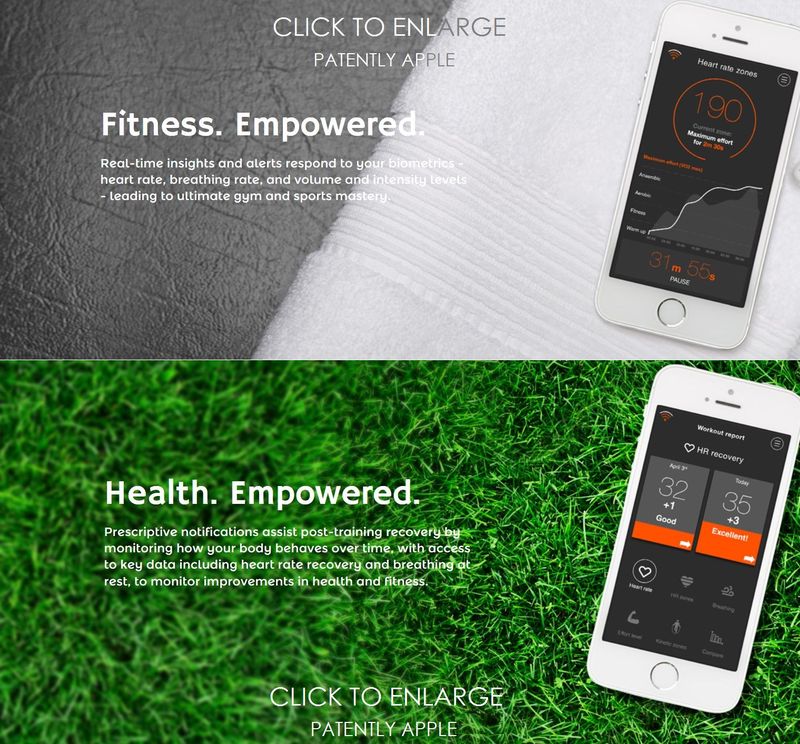 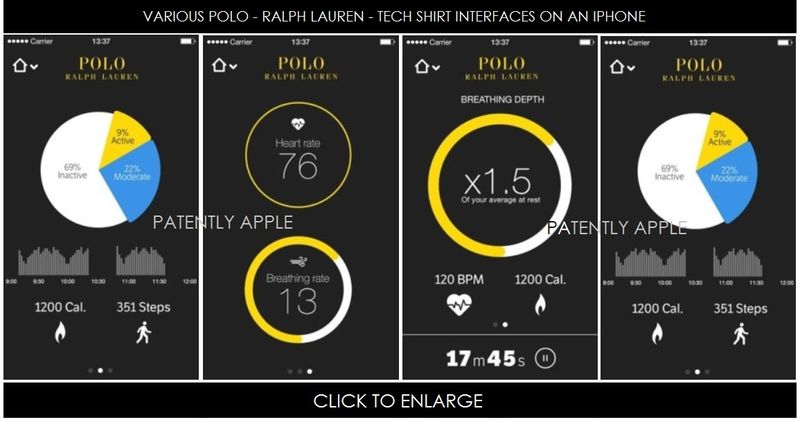 The industry as a whole is working on various aspects of advancing smart clothing. We noted one such advancement in our opening summary regarding advanced glass fibers and today we've learned that Korea's Electrotechnology Research Institute has developed a technology for weaving fabrics with solar cell properties.

More specifically, they've developed a "woven (fabric-type) dye-sensitized solar cell," which is one of the next-generations of solar cells. As this woven solar cell is as flexible as fabric, it is possible to sew and cut it. It is also possible to apply different patterns to different user environments and application targets.

The woven solar cell and the applicable technology can be applied to future smart watches for use as a power supply. It is also forecasted that it will be able to be applied to camping goods, building integrated photovoltaic systems, solar cell curtains and portable cells for the military.

In the end, today's revelations about Ralph Lauren and Canadian firm OMsignal bringing smart biometric technology to clothing is only the beginning of what's to come over the next few years. In this decade we'll also be seeing how clothing will incorporate power charging capabilities in order to keep our digital devices fully charged and ready to use on a 27/7 basis.

Just how far Apple will be participating in this next technological front is unknown at this time. However, with Apple leading the way with biometrics for the iPhone via Touch ID in 2014 and their new Health App for the iPhone 6 coming in September, we're bound to learn more of Apple's involvement in the emerging smart clothes market over time.

In fact, with Ralph Lauren's new tech shirt working with iOS right out of the gate, perhaps this is just the tip of the iceberg of what's to come for iOS. Perhaps this is something that Apple's executives will touch on during one of their coming events this fall. Yet as always, only time will tell.