During the night shift on August 21, 2014, a conflict developed between an assembly worker and a guard due to such an inspection when the worker went to the restroom. Harsh words were shared between them, and the guard stabbed the worker with a knife, killing him. The guard confessed to his crime. 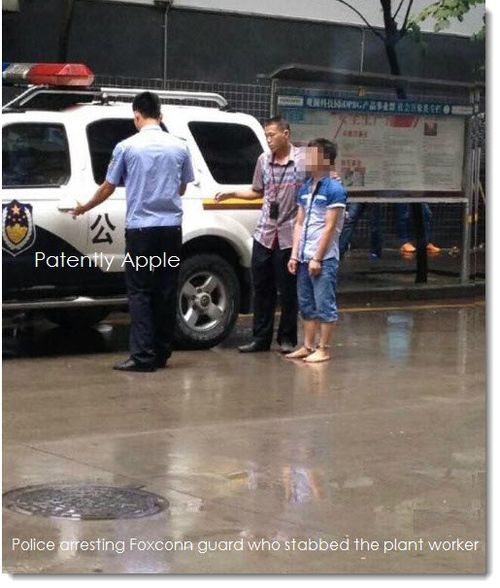 The incident reportedly occurred during the nightshift when the worker was scanned with a metal detector. A fight broke out resulting in the stabbing of the worker in the neck. Foxconn internal insiders said the incident occurred yesterday at 1 pm.

The iPhone 6 production is in full swing and workers are pulling in overtime to get the iPhone 6 out in volume. With tension running high, leakers are tempted to sneak iPhone 6 parts out of the plant to get them on the web for bloggers to publish. It's a big business.

A translation of one Chinese source commenting stating that "Under the consumer, Apple, Foxconn enterprise "conspiracy", Chinese frontline workers suffer inhuman working hours and factory autocratic management, in order to make new phones promptly delivered to consumers, workers are not allowed to have a trace of errors. In addition, in order to keep the new phone's "mystery", Apple and Foxconn strict secrecy imposed on the implementation of the first-line shop, is connected to the front of a toilet everybody check with insulting nature of the security system, and a positive is the implementation of this system in the background, this article talking about the murder took place."

One of the reports sarcastically ended by commenting on whether or not a high style iPhone is worth a person's life. When you pick up the new iPhone 6, will you think of the real existence of what "sweatshop workers" endure to get that product to you, the report asks.

Sadly, but understandably, that will be the last thing that consumers will be thinking of when the iPhone 6 debuts on September 9th. My sympathies go out to the worker's family.