Apple Files for "CarPlay" Trademark in the US and Europe

After filing for the "CarPlay" trademark in China yesterday, Apple has now filed for this trademark in both the US and Europe under various International Classes for protection. For those unfamiliar with the "CarPlay" brand name, it's a standard developed by Apple to allow devices running the iOS operating system to function with built-in display units of automobile dashboards. CarPlay is available for all iPhones that use the Lightning connector and operate iOS 7.1 or later. While originally unveiled as "iOS in the Car" during the opening keynote of Apple's Worldwide Developers Conference (WWDC) on June 10, 2013, it was later formally renamed CarPlay on launching to the public on March 3, 2014, at the Geneva Motor Show. Report Updated August 16, 2014. 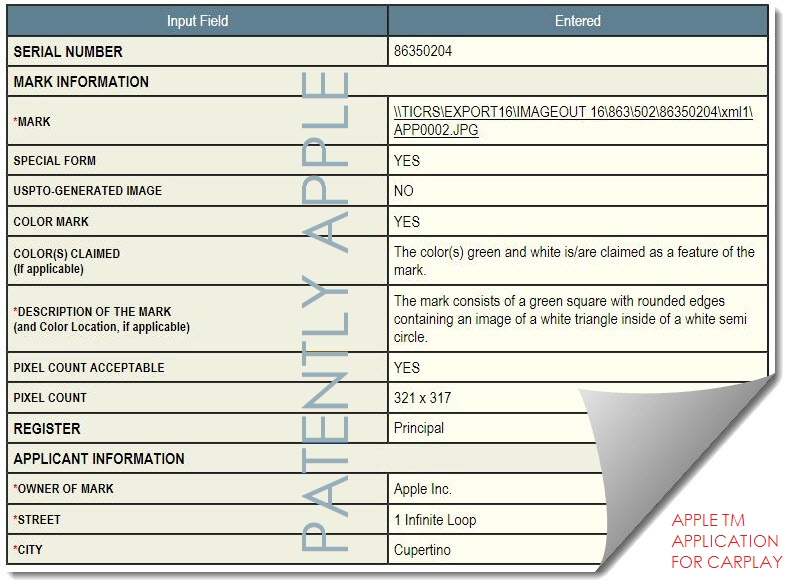 According to US Patent and Trademark Office's documentation, the trademark was filed under International Class 009 which cover the following:

The European's version of International Class 009 matched that which was used in China yesterday, which is a much broader version. Apple's European filing is noted below.

Whether Apple has dealt with CarPlay Enterprises, LLC's Carplay Trademark in both the US and Europe for this trademark, or if that was a shell company of Apple's is still unknown.

Report Updated August 16, 2014: Apple's CarPlay trademark, excluding the logo, was published on this date under number 86364433. It was filed under the same International Class as noted above for the CarPlay logo.