On July 3, 2014, the US Patent & Trademark Office published a patent application from Apple that describes an invention related to audio and more specifically to a magnetically biased electromagnet for audio applications. While Apple's invention will be appealing to true audiophiles who will appreciate Apple's determination to bring high-fidelity sound to ever smaller mobile devices, it's the side effects of this invention that may be the real news here. Imagine Jony Ive creating a future iPhone that didn't have to include external audio grilles. Imagine an iPhone that eliminated that design distraction. Considering that Apple may eliminate the headphone jack in future iPhones as well, iPhone designs are headed for cleaner, slicker form factors. In fact, Apple has already provided us with several examples of possible future design form factors for the iPhone that indeed eliminate both audio grilles and the headphone jack as seen here and here. The other side benefit of eliminating both the audio grilles and headphone jack as it allows Apple to design an iPhone that is waterproof, a point that Apple clearly makes in their current patent application.

In modern consumer electronics, audio capability is playing an increasingly larger role as improvements in digital audio signal processing and audio content delivery continue to happen. There is a range of consumer electronics devices that are not dedicated or specialized audio playback devices, yet can benefit from improved audio performance. For instance, portable computing devices such as laptops, notebooks, and tablet computers are ubiquitous, as are portable communications devices such as smart phones. These devices, however, do not have sufficient space to house high fidelity speakers. This is also true to a lesser extent for desktop personal computers and low profile television sets with built-in speakers.

Generally, as a speaker decreases in size it is able to move less volume and thus sound quality (or at least loudness) may decrease. This may be especially noticeable for sounds in the lower end of the audio spectrum, e.g., beneath 1 kHz.

Furthermore, the available volume within an electronic device shrinks, which in turn provides less air for a speaker to react against and thus limits the audible response. Similarly, the sound level and frequencies able to be produced by a speaker may also decrease as the size of the speaker decreases. Thus, as electronic devices continue to decrease in size, detrimental effects may be experienced for audio produced by the devices.

Apple's invention generally relates to a biased electromagnet for audio electronic devices, though they noted that "Other embodiments are also described and claimed." That added notation made us pay closer attention to the details and sure enough a gem was found which we'll cover later in this report.

The heart of the patent relates to an electronic device including an enclosure having a top panel and a bottom panel and an electromagnet is mounted within this enclosure.

Apple's patent FIG. 3 noted below is one example of a cross-sectional side view of a magnetically biased electromagnet. 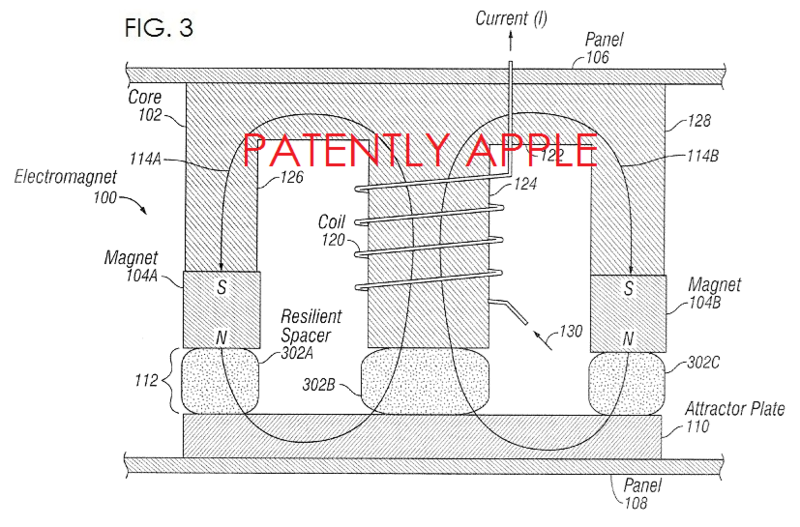 While Apple's invention is to produce a smaller audio component to produce high fidelity audio for devices ranging from MacBooks, to the iMac, to televisions through iDevices like the iPad and Phone, there was one hidden gem that can't be ignored. While the following revelation applies to any future Apple device, it's the iPhone that could likely benefit the most from this invention. It's one that Jony Ive would love to implement.

Therefore, "the enclosures and thus the electronic device may be completely sealed from water and/or air."

While Apple's first focus for this invention is noted as a future MacBook, they later state that "The concepts described here, however, need not be limited to portable audio devices such as laptop computers. For example, the biased electromagnetic transducer may be implemented within a mobile communications device such as a smart phone." Yes and more specifically an Apple iPhone, which they recognize further into the application.

Apple credits Christopher Wilk, Martin Johnson, Patrick Kessler and Nathan Johanningsmeier as the inventors of patent application 20140185859 which was originally filed in Q4 2012. Considering that this is a patent application, the timing of such a product to market is unknown at this time.

As a side note, the hollow form factor iPhone designs that we pointed to earlier in this report were in context with using liquid metal and sapphire. Interesting is the fact that Apple has filed a follow-up patent application to their original patent filing that we covered back in April relating to liquid metal hollow structures